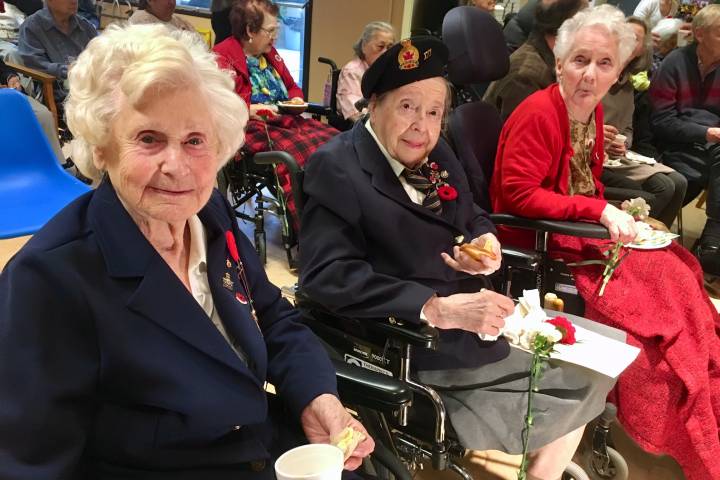 It was a special Remembrance Day weekend for three veterans in Vancouver on Friday.

The three are also clients of Holy Family Hospital in Vancouver, where they were honoured at a special Remembrance Day ceremony on Friday.

The trio were each presented with a special pin and white carnation to recognize their service.

None of the women knew each other before coming to Holy Family, but have since become friends.

The three women share one thing in common alongside their service records: a love of flying.

Colleen DeSerres, 86, served in France during the Korean war.

Flying is a family tradition for DeSerres. Her great uncle Douglas McCurdy flew the first powered flight in the British Empire in 1909.

Decades later, DeSerres took up the tradition during the Korean War. She learned to fly in France, where she’d been deployed because she was bilingual, she said.

“I flew a Tiger Moth in France. It’s a single-engine aircraft. It was exciting, going down the runway and then taking off. I couldn’t believe it when I took off an looked out the window and the earth was way down beneath me,” she told Global News.

“Then, one of [the] jet pilots, they were in training for the Korean conflict, took me up in a jet. A T-33 jet. That was exciting, he let me take the controls.”

Penny Stirling, 94, said she joined the air force because she’d loved the idea of flying since she was a child.

Stirling, a World War II veteran, recalled her time in the air force as “a grand old time.”

“I was what they called the watchkeeper. That meant that every operation that was going on that day I had to report it all, and make sure it all ran smoothly,” she said.

Stirling, too, was driven to join the service because of a love of aviation.

As a child, she grew up near an airfield that fueled her dreams of flight — dreams she could turn into a reality by spending time around the runway.


READ MORE:
Historic instrument from WWI to be played in Edmonton for Remembrance Day

“I was always hoping to get my first ride in an airplane,” she said.

“I noticed there was a lot of flying, take-offs and landing, so I thought surely I could get one of them to take off and land me, so when he landed, I ran over to the pilot’s cockpit and he knew what I wanted, he said OK, get in, and that’s how I got my first flight.”

Stirling said Remembrance Day always holds a special place for her, and for her family, including her son.

“He’s very proud of having his mother in the forces. It has been a great experience for me,” she said.

Geraldine Grimway, 97, said Remembrance Day is always a somber occasion for her because she remembers the friends she’s lost.

Grimway, another World War II veteran, served in Ottawa and in Vulcan, Alta. “where the boys got their wings” in flight school.

Remembrance Day brings back a flood of memories.

“It is just a very sad day for me, I’ve lost so many friends,” she said.

Grimway thinks of the friends she served with and her husband, who also served in the war during the annual ceremonies.