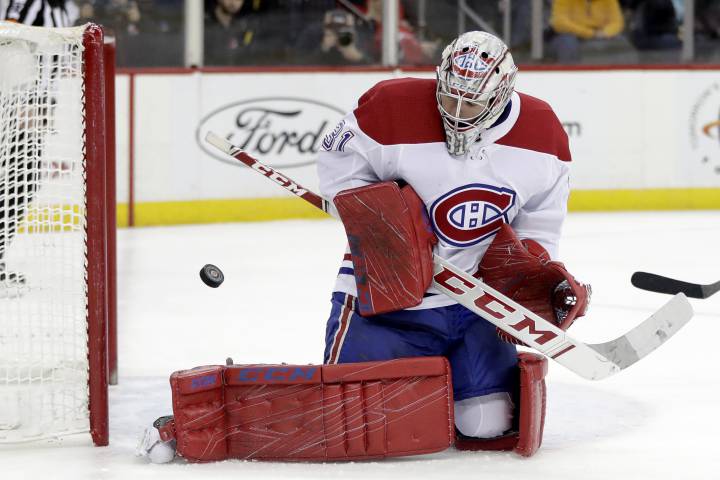 Max Domi called it the most important week of the season. Game one was a thriller but the Montreal Canadiens lost in overtime at home against the Washington Capitals.

Game two Wednesday night against the New Jersey Devils in Newark. The Devils already in trouble needing wins after a difficult first quarter of the season. The Habs trying to solidify their strong start with the eighth best record in the NHL.

Carey Price makes the list for not having a temper tantrum on the ice or yelling at his defenders for a lack of support. It was just a massive barrage of rubber on Price, as it is on many nights. Price won’t have a good percentage when this season ends. He simply has to make too many stops that the other team’s star player gives a round of applause for. Price was the only player who can get any credit in this one, and not for the results as he let in a handful, but just for hanging in there when it was so ugly.

READ MORE: Call of the Wilde — Habs win in Vancouver

It doesn’t seem like such a big issue for the Habs to lose a second-pair defenceman but the loss of Noah Juulsen to a fracture of the cheek was immediately felt. The Habs defence was such a mess in the first period it was painful to watch. They didn’t have the pace at all to keep up with the aggressive Devils’ forecheck. You can always tell when a player has the required talent because when pressured he can still, with less time, make the right play. So in the first period, it was fair to say that no defender had the requisite talent. Xavier Ouellet on the first goal against had control of the puck, but then the pressure came and he simply could not handle it. He passed it over to Victor Mete,who also had no time to make the play, but, at least in this case, he was given an untenable situation to deal with. Every time Ouellet and Mete were on, the Devils had immense pressure. David Schlemko has been receiving praise, and this seems to be due to a comparison situation. Schlemko doesn’t seem so bad because he seems less bad than the others seem to be. This is how Schlemko is getting evaluated and it’s making some more positive than they should be overall. Schlemko is also a third-pair defenceman. Honestly, the entire left side of the Habs defence is third-pair talent. They don’t have a single even second-pair defenceman in the organization. Schlemko, Ouellet, Jordie Benn, Mete, Mike Reilly — anyone that they can try there is simply not talented enough.

The Habs have all the tools required offensively. They lead the league in five-on-five goals and they’re going to get better in that area. Jonathan Drouin, Domi, Jesperi Kotkaniemi are all going to get better than they are now. They’re just getting started and they are key players. They also have centre Ryan Poehling coming, and right winger Nick Suzuki coming. They’re already one of the best offensive teams in the league and they’re going to get significantly better. At forward, they are there. In goal, they are there.

So some honest assessment here for the General Manager Marc Bergevin. On the right side of the defence, they have Shea Weber, Juulsen, Jeff Petry, and extremely talented Josh Brook. They have four defenders on the right and all of them are potentially 3-4 ranked and better. The implication here is then, of course, that they have to trade a right-side blue liner to a team that has an abundance of talent on the left, but not on the right. It can happen, and it has to happen eventually. The Habs can be a shockingly good team in two years but they need two talented left side– not marginal — defenders. Benn, Schlemko, Alzner, Ouellet, and yes, even Reilly are all just depth players. This could not be more obvious than when you watched the Devils skate circles around the Habs blue liners. This team is closer than you think, but without these two vital players added, they are farther than you think. Bergevin, you did a good job turning it around at centre. Now there is one more job to do and great things could happen.

The Habs have the potential next season to have one of the best fourth lines in the league. Take any of Nikita Scherbak, Charles Hudon, and Paul Byron from this season, joined by centre Poehling next season. This would be something to see Poehling make the club next year and while he finds his way let him play his excellent 200-foot-game. The talent up front now and in the future is formidable. Until then, wow, is it painful to watch Nicolas Deslauriers trying to keep up to the pace of this hockey. Deslauriers had a good run last season and Bergevin got fooled. He thought he needed that size in his line-up, but have you noticed how much size is worth in the league these days? All we see with that size from Deslauriers is him skating in quicksand trying to keep up to speedier opponents. He’s an American Hockey League player. There is absolutely no way that when there is health and Poehling and Suzuki arrive next season, that there is a spot for Deslauriers in this line-up. Being honest, he shouldn’t be here now, but injuries happen, so the fourth line getting dominated will continue.

The Habs are the best team in the league five-on-five and the 28th best team in the league five-on-four or five-on-three. This is hard to believe. The problem is they have no one from the point that anyone has to respect. When the Habs fire from the point, the opponent simply allows it, believing rightfully so that it is the best option they could have as an outcome. So the Habs blue liner fires it either high and wide, or into the goalie who isn’t challenged by a 45 footer from anyone of the Habs back there. The arrival of Weber will be significant. Some have said it won’t matter, but it will, and not just for the shot that Weber has, but for the opening down low that guarding Weber will create. If they allow Weber shots, they will score. If they guard Weber, the space created by that action, will open it up for the forwards. As it stands now, when the Habs have the power play, they really don’t even have the power play except up high where they don’t have a shooter to take advantage of it. Weber will be back in a week it is expected. We shall learn soon if it is better. Can it really get worse?

The Call of the Wilde is quite negative, of course, after this terrible loss, but overall, let’s not forget that the Habs are top 10 in the league this season. They have remedied their centre woes, and they can score goals on most nights at a level that is close to the best in the entire league. Their defence on many nights is embarrassingly bad, but Weber is coming, Juulsen will be healthy again, and the very talented Brook is coming next season. and they only need a couple important improvements on the left side D to be an extremely good team. The long view is outstanding for the Habs.