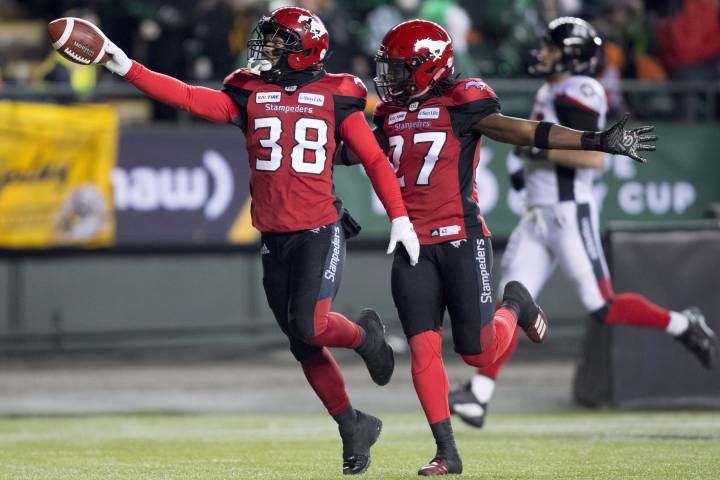 Williams had a record 97-yard punt-return touchdown on a slippery Commonwealth Stadium turf Sunday night to lead Calgary past the Ottawa Redblacks 27-16 in the Grey Cup.

Calgary finally won the CFL title in its third straight appearance. The Stampeders lost 39-33 in overtime to Ottawa in 2016 before dropping a 27-24 decision last year to the Toronto Argonauts.

Calgary quarterback Bo Levi Mitchell – the CFL’s most outstanding player this season after tossing a league-best 35 TDs – was the game MVP with two touchdown passes but also two interceptions. Stampeders receiver Lemar Durant was named the outstanding Canadian with four catches for 30 yards and a TD and a 22-yard run.

Ottawa – in its third Grey Cup in four years – appeared to score on Greg Ellingson’s acrobatic one-handed grab in the fourth quarter but replays showed the ball hit the turf. The Redblacks ended up turning the ball over on downs at the Calgary seven-yard line with just over eight minutes remaining.

A Commonwealth Stadium gathering of 55,819 watched the opening kickoff in 1 C conditions with an 11 kilometre-an-hour wind. But the field proved to be the story of the game.

Williams provided the entertainment factor in an otherwise sloppy opening half. The two teams combined for four turnovers (three picks and a fumble), some ugly drops and eight punts.

Mitchell was 14-of-21 passing for 182 yards and two TDs with two interceptions. Redblacks quarterback Trevor Harris never seemed to be in any rhythm despite having time to look downfield, completing 8-of-17 passes for 132 yards with a touchdown and interception.

Ward – the CFL’s top rookie and special teams player this season – connected from 30 yards out at 2:28 after a rare miss from 47 yards out in the first. Ward made 51-of-52 field goals this regular season, including a record 48 straight that will carry over into 2019.

Jackson’s 21-yard TD catch opened the scoring at 10:46 of the first. With Ottawa coming on a blitz, Jackson took Mitchell’s screen pass and scored easily.