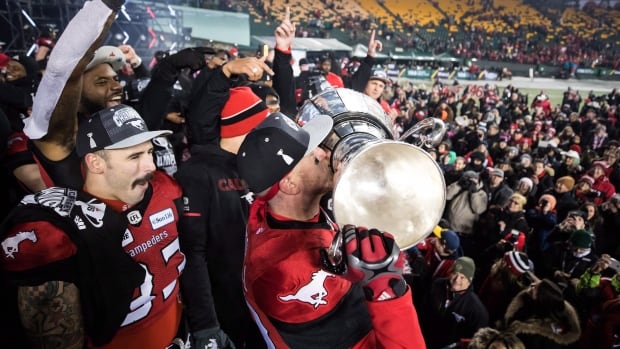 EDMONTON — This time, they didn’t flinch.

There wasn’t heartbreak, a fumble or interception that would leave the Calgary Stampeders wondering what might have been.

It was only pure joy and celebration for the Stamps, who defeated the Ottawa Redblacks 27-16 to capture the 106th Grey Cup.

And when the clock finally hit zeroes inside Commonwealth Stadium on Sunday night in Edmonton, Calgary players galloped onto the field, raced to the stage and hoisted the trophy that had eluded them the past two seasons.

They danced around for what seemed like an eternity as red-and-white confetti shot into the calm, crisp night. None of the players were leaving the stage. They weren’t in a hurry. It was a championship moment three years in the making.

« Those emotions flooded over us. We were making up for lost time, » said Calgary quarterback Bo Levi Mitchell.

A special kind of win

Mitchell was named the Grey Cup MVP for the second time in his career. He was named MVP during his first Grey Cup win four years ago in Vancouver and is now 2-2 as a starter in the championship game.

But this win was different. The heartbreaking sting of the last two Grey Cup defeats left the Stampeders wondering if they’d ever get back to the top.

« It’s been hard, » Mitchell said. « The amount of time you put in. There is so much sacrifice and sometimes it feels worthless when you get to the championship and lose. »

When the Stampeders finally made it inside their locker room, the champagne sprayed, cigar smoke swirled and beer shot in all directions. The players went wild — their dancing, singing and celebrating told the story about how difficult the past three seasons have been.

« I think everyone knew tonight nothing was going to hold us back, » Mitchell said. « We were all going to do this for each other. That’s the difference. » 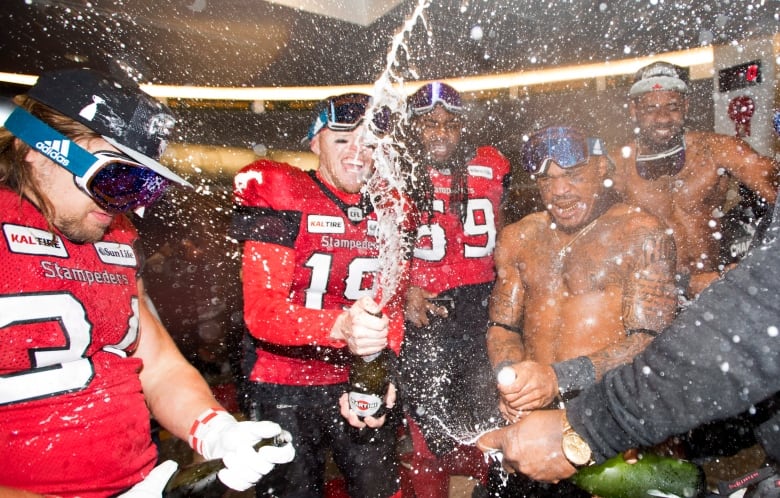 There were times throughout the game the Stamps could have faltered or went « here we go again. »

Mitchell threw two first-half interceptions and Calgary let Ottawa stay in the game. The score was 14-11 Calgary with time ticking down before halftime — but it felt like the Stamps should have been leading by much more.

Then Calgary punt returner Terry Williams changed the story for a team that so badly needed a big play in a Grey Cup game.

Williams caught the Ottawa punt at his own 23 yard line with 20 seconds left and started to rumble on the icy turf. Players had trouble with their footing all throughout the game — Williams did too at the beginning of his run. He braced himself, got his feet under him and never looked back.

Williams ran straight to the end zone. His 97-yard punt-return touchdown was the longest in Grey Cup history. More importantly, it swung the momentum back to Calgary — something they just couldn’t do in the previous two title games.

« I wanted to show the world what I could do, » Williams said. « That field is horrible. It was slippery. I couldn’t wear the cleats I wanted to.

Williams gave the Stamps a 21-11 lead going into halftime and instilled confidence in a team so fragile from two previous Grey Cup defeats.

« We said all week there’s no way we’re going to lose this game. We weren’t going to choke. »

Resilience is what the Stampeders preached all season long. Calgary wanted to be a team that fought through adversity and found ways to win.

Lemar Durant needed to be resilient when it mattered most. He dropped two easy passes for the Stampeders early in the game and looked shaken.

But Mitchell never gave up on his receiver. And Durant wasn’t about to drop the ball a third time.

He made a spectacular leaping catch and dove into the end zone for a 17-yard touchdown midway through the second quarter to give the team a 14-3 lead.

« Bo trusted me, threw it up and I made the play, » Durant said.

« Being the competitor I am, those drops hurt. It’s hard for me to get those drops out of my head. But then at the same time I worked way too hard to get here and let that affect me. »

You always dream of winning championships but to get it done is awesome … We were going to die on that field if we had to.– Lemar Durant

Durant rebounded after those first two drops, catching the next four passes thrown his way. He finished the game with 30 receiving yards, along with 22 rushing, and was named Most Outstanding Canadian.

« You always dream of winning championships but to get it done is awesome, » Durant said.

As the party spilled into the locker room, head coach Dave Dickenson was in the middle of it all.

He was doused with champagne, cracked opened a beer and then sprayed a bunch of his players. His relief, happiness and emotion were clearly evident as he celebrated with his players.

« There’s been a lot of frustrated guys these last few years, » Dickenson said. « It felt like we had to get it done and we did. »

This was Dickenson’s first Grey Cup win as a head coach and his third consecutive appearance — but the previous two trips have haunted him. The former quarterback won Cups before as a player and lost them too, but the defeat last year to Toronto was the worst ever for him.

« Last year was the hardest loss of my life. Player or coach, » he said. « I didn’t know if we’d get back and I really didn’t want to think what three losses in a row would feel like.