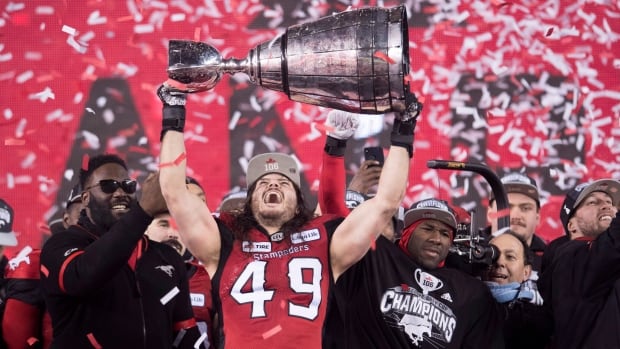 Williams had a record 97-yard punt-return touchdown on a slippery Commonwealth Stadium turf Sunday night to lead Calgary past the Ottawa Redblacks 27-16 in the 106th Grey Cup.

Calgary finally won the CFL title in its third straight appearance; the Stampeders lost 39-33 in overtime to Ottawa in 2016 before dropping a 27-24 decision last year to the Toronto Argonauts. It’s the franchise’s eighth Grey Cup and its first since 2014.

Calgary quarterback Bo Levi Mitchell — the CFL’s most outstanding player this season after tossing a league-best 35 TDs — was the game MVP with two touchdown passes but also two interceptions. Stampeders receiver Lemar Durant was named the outstanding Canadian with four catches for 30 yards and a TD and a 22-yard run.

Mitchell finished 24-for-36 passing for 253 yards. Redblacks counterpart Trevor Harris had a rough night, going 20-for-38 for 288 yards with one touchdown and three interceptions.

Ottawa — in its third Grey Cup in four years — appeared to score on Greg Ellingson’s acrobatic one-handed grab in the fourth quarter but replays showed the ball hit the turf. The Redblacks ended up turning the ball over on downs at the Calgary seven-yard line with just over eight minutes remaining.

A Commonwealth Stadium gathering of 55,819 watched the opening kickoff in 1 C conditions with an 11 kilometre-an-hour wind. But the field in Edmonton proved to be the story of the game.

Watch highlights of Bo Levi Mitchell and the Stampeders win the Grey Cup:

Williams provided the entertainment factor in an otherwise sloppy opening half. The two teams combined for four turnovers — three picks and a fumble — along with eight punts and some ugly drops.