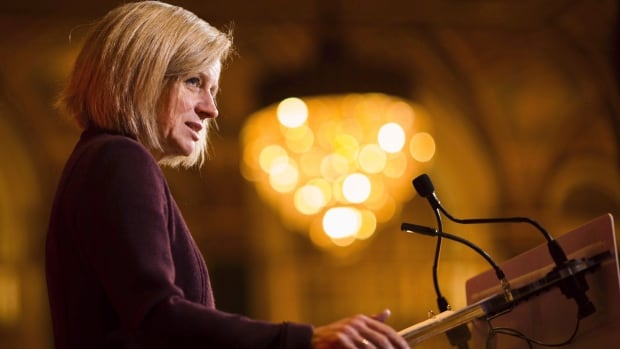 The premier’s office provided the following letter from Rachel Notley to CBC News in advance of her announcement on Sunday evening.

My fellow Albertans, your energy resources — the natural inheritance of every person in this province — are being sold for next to nothing.

A decision needs to be made, one with real repercussions for working people and our entire economy. I want to take this opportunity to lay out the problem Alberta faces and the choice in front of us.

First, let’s look at the problem we are facing. We are in a position where we can’t move our oil because government after government in Ottawa has failed to build pipelines. Existing pipelines are full. Record amounts of oil are being shipped by rail, but nowhere near enough to reduce the backlog. As a result, more of our oil sits in storage than ever before: 35 million barrels worth.

With so much oil just sitting there, unable to be moved, it is being sold at fire-sale prices, around $10 a barrel. Other oil products around the world are selling for five, six times more. It’s absurd, economically dangerous, and cannot be allowed to continue.

The long-term answer is building new pipelines, which we will keep fighting for. We are also increasing upgrading and refining capacity here in Alberta, and we have taken bold action to get thousands of rail cars to dramatically increase the amount of oil we ship by rail, but none of these solutions will bring about relief in the short term.

We need to do more and do it now.

There are two competing views for how we fix this problem. Neither choice is without downsides.

The first is to let the free market sort itself out. The thinking is that companies will have to make decisions about what they can produce based on what they can sell. Some of the bigger companies, companies that are both producers and refiners, are still able to operate at a profit, even at these low prices. Many companies, though, are not and would be forced sell at a loss for as long as they can manage. Some have already had to lay people off and no doubt there would be more. Some would likely shut their doors.

The second view for how we fix this is for us to intervene and temporarily restrict oil production, with a cut in production industry-wide. That restriction would remain in place until stockpiles draw down, the price gap closes and the bleeding stops.

While a consensus appears to be forming among some political leaders, no such consensus exists within industry. At this point, no industry consensus is expected.

So, Alberta, it comes down to what is best for us, all 4.3 million of us, the owners of our oil resources. As owners, we have an obligation to get the most value possible.

This is a major decision with major implications. We need to be smart. That’s why, for weeks now, we have been in extensive discussions with everyone involved, and have sought expert advice from many quarters. That work is drawing to a close.

There are good jobs and made-in-Alberta businesses at stake. This is about more than numbers on a screen or economists talking. It’s about working people, people with great skills, who have made Alberta the best place in Canada to live.

Our decision will be announced Sunday. It is one of the toughest decisions we will make as a province, but I promise you this: your jobs, your kids, and your futures will remain our absolute focus.

No matter what, I won’t stop fighting for you.

CBC will livestream Notley’s announcement on Facebook and online on Sunday at 6 p.m. MT.

Twas the waiting for Nylander