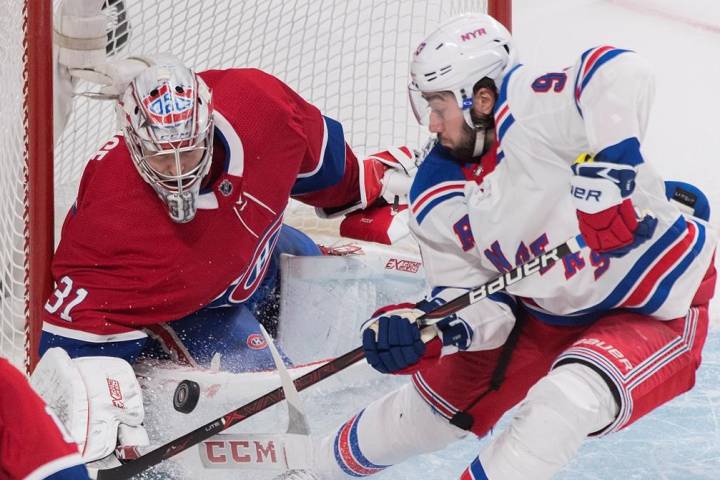 Since the much-anticipated return of Shea Weber, the Montreal Canadiens have put on a tremendous territorial show in their first two games. They outshot the Carolina Hurricanes 49-22 and then outshot the New York Rangers 42-22. It doesn’t get more dominating than that, even though the Habs won only one of the two games.

With the five-game losing skid in the rear-view mirror, the Habs tried to build on their complete game effort against the Rangers with a win over the San Jose Sharks in a rare Sunday night affair at the Bell Centre.

WATCH: Call of the Wilde — Breaking the losing streak?

Brett Kulak continues to stand out on the left side against the rest of this season’s motley crue.

Kulak is making a solid first pass. He makes smart decisions over and over again. When he got clocked, he just got right back up and played the same game he did before. He isn’t the long-term solution to partner with Shea Weber, but he sure is working right now.

Weber is being extremely physical and winning puck battles, then Kulak gets the pass and feeds it up the ice with intelligence and quickness. They have tried many on the left side: Jordie Benn, David Schlemko, Victor Mete, Xavier Ouellet, Mike Reilly, and no one has looked more capable than Kulak.

The real test, of course, is can he keep it up?

Reilly looked strong for a while before tiring. Benn always seems to tire. Schlemko is Schlemko. They are all proving that doing it consistently is the real challenge. So far, Kulak has met the challenge. It’s to be continued whether or not he’s the real deal, but his chances seem better than the rest so far.

Tonight was another outstanding night for Shea Weber on a personal level.

The hit that Weber levelled in the second period was ferocious. It also wasn’t a penalty. Joonas Donskoi was absolutely crushed with a legal body check. When they met each other directly after with Donskoi complaining, you could actually see Weber say, “Then keep your head up.” Weber wins every battle, and he makes the opponent know that they have been in a hockey game.

There have been many times that Carey Price has so much traffic around him for many seconds with the opponent hacking away at it with impunity, but not anymore. Weber is crushing people in front of the net. They won’t go there so freely in the future, knowing the pain that awaits.

READ MORE: Call of the Wilde — Montreal Canadiens lose to the Boston Bruins

Jesperi Kotkaniemi is going to be a strong centre in the National Hockey League, but there was no glimpse of that in this one.

The Sharks bring the body and Kotkaniemi was getting tossed around significantly in this one. He can’t win puck battles; he’s just not strong enough. When he faces a physical team in the mood to hit everything that moves, that’s just too much for this 18-year-old whose body has not matured yet as an adult.

It makes a big difference. You can’t give up 40 pounds and expect to win the puck in the corner. This was one of the first nights that Kotkaniemi looked completely out of his element in the NHL. Head coach Claude Julien knew it, too, and kept his ice time low to save him from more pain.

It should be expected that teams will come in and throw him around as much as they can as this season progresses. They’re not going to see a possible weakness and back off, so Kotkaniemi is going to have to figure out how to win some space by finding dead zones. As a result, he’s playing a game with his stick skills and not his body weakness.

With all of that said, the great part is that he will add 30 to 40 pounds, and then look out for all that he can bring. He’ll be a star. You can’t rush the changing of the body into adulthood, so a little patience is going to be required some nights.

There were a lot of goats in this one, and it was certainly disappointing for Habs fans.

This was one of those nights when you assess it this way: You have just ended a five-game losing skid the night before, and you need to consolidate the momentum with another win. You need to feel that the winds of change have really blown in, and not that losing is the real theme of the story. So when the night goes like this, when the commitment does not seem there, it’s a large step back. It’s a moment when you aren’t sure which team you are: the one that got off to a great start, or the one that lost five straight.

This wasn’t just one loss. This was a loss that said a lot. It said that even with Shea Weber there, you may not be all that. It’s a long season and some games are much more significant than others. This was a significant game to consolidate and gain momentum, and yet they laid an egg.

The Habs lost Nikita Scherbak to the waiver wire at noon Sunday, as he was grabbed by the first team that had a chance to take him, the Los Angeles Kings. The Kings are already in a rebuilding mode this season with an old team that needs to get younger and find some scoring. The Kings average just over two goals a game, which in this high scoring season is abysmal and also the worst in the league.

Scherbak couldn’t find a home in the heart of Claude Julien, who simply did not like him as a hockey player. It’s extremely difficult to have a crystal ball on a player, but when you are a 22-year-old first round draft pick who led the American Hockey League in points-per-game last season, it would seem premature to close the book on him already.

However, they preferred 27-year-old journeyman Nicolas Deslauriers with his one goal and no upside. Though it is unlikely that Scherbak will go on to star in the league, it is 100 per cent certain Deslauriers never will. That’s in the past now.

In the future, the Habs will have no shortage of talent up front, so they’ll surely survive this either way.

Whatever choice you make there, the Habs are locked in with some outstanding third- and fourth-line talent for years to come. It might just be among the best in hockey. Not many can boast a 20-goal scorer like Byron late in the depth chart. So while it seems silly to lose a potentially outstanding hockey player in this instance, at the same time, this team is not going to be lacking at forward for a long time. Names like Jacob Olofsson, Joni Ikonen, Jesse Ylonen and Jake Evans haven’t even been mentioned and they all have NHL third line potential, if not even higher in some instances.

Now, about that left side of the defence.

Speaking of the Habs’ two best prospects, they both had strong weekends again. Ryan Poehling’s team Saint Cloud State didn’t fare all that well, with only ties against Miami or Ohio, but Poehling upped his season totals to 14 games played with three goals and 12 assists for 15 points. It’s the first time that Poehling has played at a point per game in his career.

The other first-round teenager, Nick Suzuki, continues to pile up the points in the high-scoring Ontario Hockey League. Suzuki has played 27 games and has 20 goals and 21 assists for 41 points for the Owen Sound Attack. The World Junior Hockey Championships in Vancouver this year are going to be extremely interesting for Habs fans, who will thoroughly enjoy watching the exploits of Suzuki and Poehling. They’ll also enjoy watching blue liner Josh Brook, who is putting up elite numbers with 21 games played, eight goals, 21 assists and am impressive plus 19.

Brook might be the best defender in the Western Hockey League this season. The Habs may have as many as nine prospects in Vancouver this Christmas.