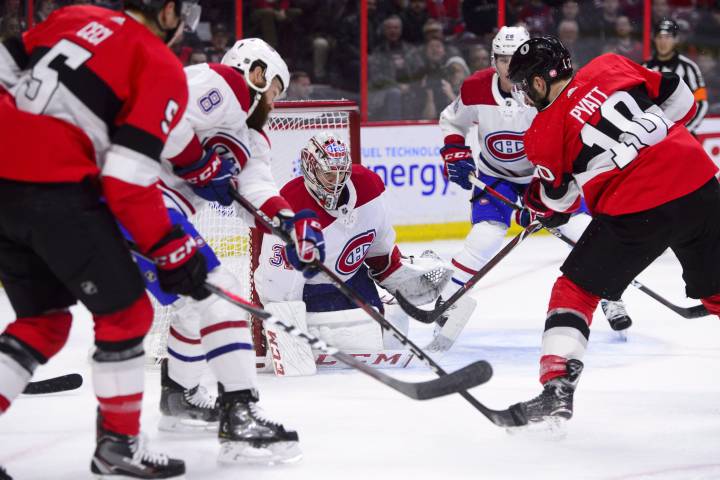 The Montreal Canadiens and the Ottawa Senators seem to be developing a healthy dislike for each other. Tempers quickly flared in their return encounter in Kanata.

The Habs won the first encounter 5-2 in a game that was not lopsided for most of the contest before Montreal pulled away. The game was certainly closer than the score and one expected the Senators would be even hungrier in the back end of the home and home.

There are times that it seems certain that Jesperi Kotkaniemi is slowing down because of a competitive, energy-draining hockey game every two nights. Other times it looks like he is just getting better and better and not tiring at all. Kotkaniemi with a sublime pass in the first period to Artturi Lehkonen. It happens so rarely that someone can see the ice at a high speed at any age, but to have a vision and a sense for the run of play at 18 is simply amazing. His passing is already there at an NHL level. Kotkaniemi will figure it out from a goal scoring point of view soon. He has the shot to score at least 25, but he hasn’t figured out yet when to use it or how to get into the dirty zones for easy goals from a short distance because of his slender body. When he adds some pounds on the frame so he can compete around the slot and in front of the net, he is going to be able to get that strong shot away a lot more. The ceiling on Kotkaniemi keeps getting higher. At first, it seemed 55 to 60 points was a marker to regularly attain, but now it feels like the ceiling for Kotkaniemi could be in the 70 to 75 range. The way that Kotkaniemi plays defensively means that with 70 points, the Habs have finally found their first-line centre.

WATCH: Call of the Wilde — Breaking the losing streak?

It seems as if the short time away from playing has helped Mike Reilly. This is a player with some end skills offensively at times. He skates well. He can join the rush with great confidence around the net. His first pass is strong as well. If he could only be ready to make the physical commitment when the game gets punishing, he would certainly be a regular in the NHL instead of someone still finding his way to being in the lineup in all 82 games. The Minnesota Wild also had him in and out at times. This spring, it appeared he would be in for all of them, but his game fell off in physical commitment. He’s back and the Habs hope that it is to stay.

Paul Byron’s absence the month that he was injured was most certainly felt. He is such a versatile player. He’s used on the penalty kill with his speed making a difference. It’s the same speed that makes him an excellent three-on-three overtime player. He can play on just about every Habs line. His first goal was outstanding in this one. Great finish for a guy no one ever thought could have a 20-goal season. He would have gotten 20 in this season too if he could have stayed healthy, but his role seems a bit diminished at this time. Byron added an empty netter for six on the year as perhaps he is still entertaining another 20-goal campaign. It would be no surprise to see that his role would increase as the season progresses, as he is reliable defensively as well.

A word has to be said about the Habs defence since the return of Shea Weber. The Habs captain has been back for five games and in those five games the Habs are dramatically outshooting their opposition. The Habs have held two teams to 22 shots. They are getting over 40 shots per game like it’s the new 30, including a 49-shot performance against Carolina. The Habs are simply a much more organized team since Weber’s return. Every defender on the Habs seems less challenged, less scrambled, more able and also rested. It’s amazing to watch one player come back to take an important 25 to 30 minutes on to his shoulders facing the best the other club has to offer and to see that make the other five better at what they do. It’s the trickle down effect and Weber is making all those under him on the depth chart better.

Brendan Gallagher is tied for the team lead with Max Domi with 13 goals. Gallagher continues to amaze. Not because he has screws in his hand and continues to score, but that he finds a way to the front of the net so often to become one of the Habs top scorers year after year. Gallagher scored with a deflection just in front of Craig Anderson. With his frame, Gallagher should not be so relentless in front of the net, but he works so hard and he has so much courage that he does things that he should not be able to do. If you are underestimating Gallagher, you are all but assuredly making a mistake.

Andrew Shaw seemed to be languishing in the first 10 games of his season. He was doing nothing on the fourth line and it kind of looked grim for him. He got a promotion to the top line with Domi and Jonathan Drouin turned his season around. Another goal in this contest on a gorgeous pass from Drouin, who gets yet another point. Shaw’s recovery has been a big reason that the top line is at such a torrid scoring pace. It’s Domi and Drouin who do the pretty work, and Shaw who does the dirty work, but if no one is there to go win the puck in the corner, then the pretty players don’t have the puck at all to complete the action. The best line is one player who goes and gets it, one player who takes it and passes it, and then the one player who finishes it. When all three players can bring all three skills of winning pucks, passing pucks and shooting pucks, then you have a seriously good line. This is the first time in a long time that the Habs have had a line like this — and especially connecting is the duo of Drouin and Domi who you can easily see staying together for a long time.

A second straight game where the Habs don’t have a single goat on the night. There were no passengers as they beat the Senators by the same 5-2 score. The shots on goal showed the domination as the Habs held an advantage of 18 to three in the third period. The shots overall were 42 to 21. That’s three games out of five since Weber’s return that the Habs have that type of massive margin. The low of the season is in. If there are no serious injuries to vital players then the low point of the season, which is five straight losses, is in.

The preliminary rosters are now set for the World Junior Championships in Vancouver and the Habs will be well represented. They may have as many as nine players in the event with a likelihood of seven overall. The two that are most unlikely to go include Kotkaniemi because he is needed to play for Montreal. It is not expected that the Habs who are trying to win a playoff spot will allow their budding star to leave. The other is Joni Ikonen who has been injured. He is ready soon to play but may not have enough games under him and enough confidence to crack the Finnish lineup.

Of the seven who are more likely to attend, it is the two Canadians who may have the hardest time to make their teams. Nick Suzuki is top 10 in scoring in the Ontario Hockey League but he will still have a hard time to crack a powerful Canada roster. Suzuki was a late cut last year. The other with expected difficulty is Josh Brook, who was the captain for the Western Hockey League team when they took on the Russians, but he will still be hard pressed to make it among strong blue liners like Evan Bouchard and Noah Dobson.

The other five seem like locks to make their respective teams. For Russia, Alex Romanov continues to play better and better since becoming a shocking second-round pick last June by Trevor Timmins. For Finland, Jesse Ylonen is a lock to make his squad. Two Americans are all but set. Ryan Poehling was on the club last year and he is expected to be the second-line centre behind Jack Hughes. Cayden Primeau is set to make the club in net, but no idea if he will be the starter for the Americans. The final player is centre Jacob Olofsson who is expected to have a big role with the Swedish team. For Habs fans, this should be the most enjoyable World Juniors ever.

READ MORE: Call of the Wilde — Montreal Canadiens lose to the Boston Bruins