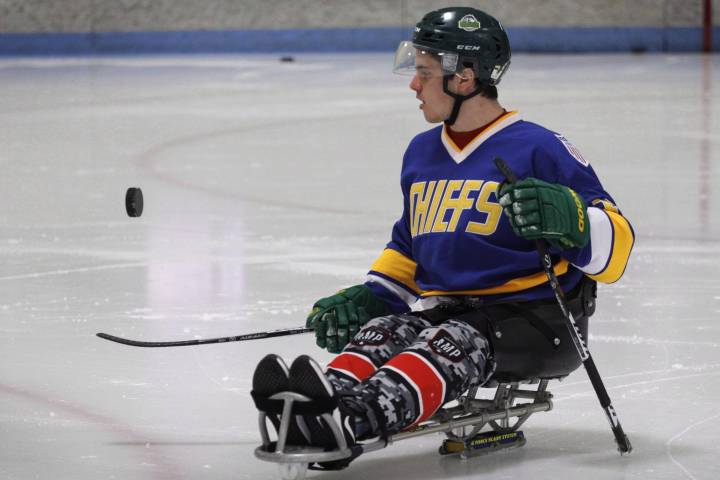 A terrifying ordeal for Humboldt Broncos survivor Ryan Straschnitzki this past week as the bus carrying him home from physiotherapy was rear-ended by a truck.

Straschnitzki, 19, was one of 13 survivors April 6 when a team bus was hit by a semi-trailer at an intersection north of Tisdale, Sask. Sixteen people died.

Straschnitzki, who was paralyzed from the chest down in the accident, has been attending physio four times a week in Calgary.

His mother says he was returning to his home in Airdrie when the accident occurred.

“His transport bus was involved in a collision. In and of itself, would’ve been traumatic to anyone. To Ryan, and, ultimately Tom and I (on the other side of his SOS call), it was devastating,” his mother Michelle Straschnitzki wrote on Facebook.

“The kind of rip-your-heart-out-of-your-chest-while-you’re-still-breathing kind.”

The accident occurred on an off-ramp entering Airdrie, just north of Calgary, last Monday, she said.

She said the impact from the vehicle was so jarring it threw him from his wheelchair, to the floor.

“More than that, it caused his severe PTSD to run to overtime. Transporting him back to April 6th. With this acute memory in his head, along with a million other thoughts, he called his Dad. Tom picked up on speaker phone,” Straschnitzki wrote.

“My mind headed into panic mode. In my defence, when your child is crying and apoplectic, with his mind on his teammates, and screaming `please live’ – Tom was the most helpful parent that night. And this wasn’t April 6th, this was November. My nightmare began again.”

Tom Straschnitzki says he was able to calm his son down and rushed to the accident scene to collect him. He said fortunately Ryan was none the worse for wear.

“All good,” he told The Canadian Press.

“That was a tougher call than April 6.”

Michelle Straschnitzki, who has been lobbying for seat belts on team buses, said she hopes this latest accident will serve as a warning to motorists who aren’t paying attention.

“I don’t ever want to hear another call from any of our kids, like that one. Please, people, pay attention. Drive to the conditions. Follow the signals, signs, and notices. There is no prize for getting there first,” she wrote.

“Never make another family go through this absolute HELL. Please.”

I want to thank the world for holding my hand as my father, Harry Leslie Smith, died