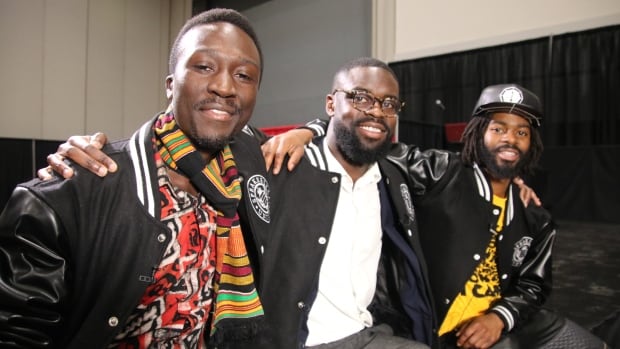 Whenever blue and red flashing lights appear in Randell Adjei’s rear-view mirror, he said he gets a queasy feeling.

The 27-year-old community leader said he’s been randomly checked near his home in Scarborough, Ont., so frequently that he can’t recall a single positive experience with Toronto police.

Last time he was pulled over, he said he was told the officer wanted to make sure he was carrying insurance, even though he hadn’t done anything wrong.

« I can’t travel in my own community without being stopped or without feeling like I’m a suspect. »

Adjei is not alone.

Similar experiences are expected to be documented in an unprecedented report by the Ontario Human Rights Commission on Monday detailing findings from an extensive inquiry into allegations of racial profiling and discrimination by the Toronto Police Service. 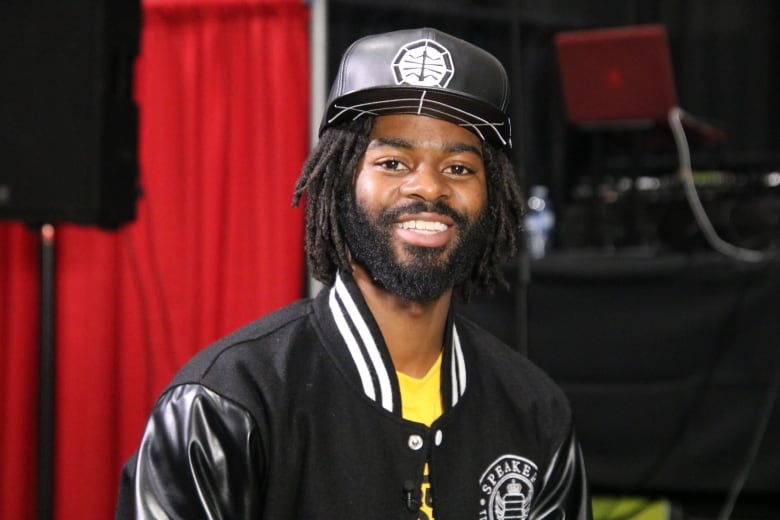 Even though there are restrictions on street checks, Randell Adjei said the practice continues. The 27-year-old community leader from Scarborough, Ont., said he and other people in his neighbourhood are randomly stopped by Toronto police and asked for identification. (Olivia Stefanovich/CBC)

The study will include police statistics from 2010 to 2017 about stop and question practices, use of force and arrests in various offence categories, such as simple drug possession and failure to comply with bail conditions.

Toronto police will not comment until the report is published, but they said they welcome the findings and are working to address the issue of implicit bias.

Like Adjei, Louis Mensah, 28, said he gets what he describes as a « bubbling » feeling in the pit of his stomach at the sight of police cruisers.

« You’re guilty until proven innocent, which is so weird, » Mensah said.

« You haven’t even talked to me. I haven’t opened my mouth. You don’t know how educated I am. » 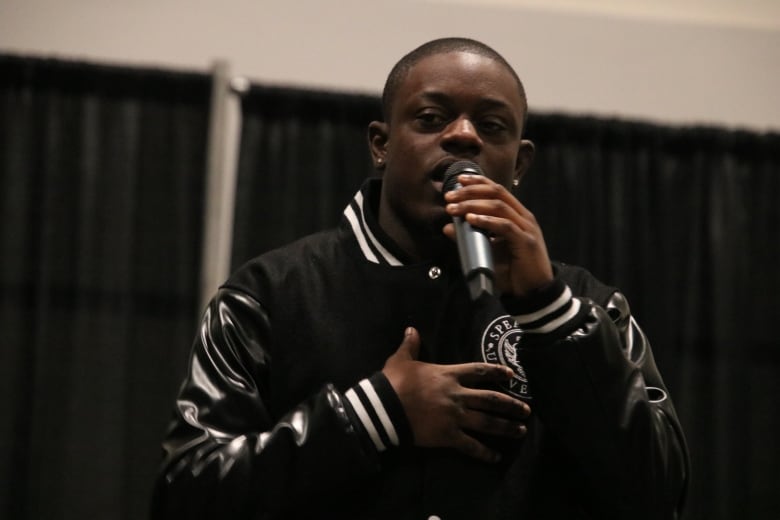 Ebenzer Oteng talks on stage during a public speaking event on Dec. 8 in Toronto. The 27-year-old said community members have a role to play in mending relations with police, including saying « Hi » to officers. (Olivia Stefanovich/CBC)

As a student studying at York University, Mensah said he was knocked to the ground by police because he fit the description of a suspect.

« They paint a picture of how the ideal criminal looks, » Mensah said.

« I’m always in a hoodie, sweats and I’m a big guy. If you see me walking down the street in all black, you’re thinking what is this guy up to? It just sucks. »

Even though the practice of arbitrary police street checks has been restricted, some young men said they still feel targeted.

« Personally, I don’t feel like I’ve really been served and protected by the police, » Adjei said.

« There’s this fear that I think has been embedded in my community. » 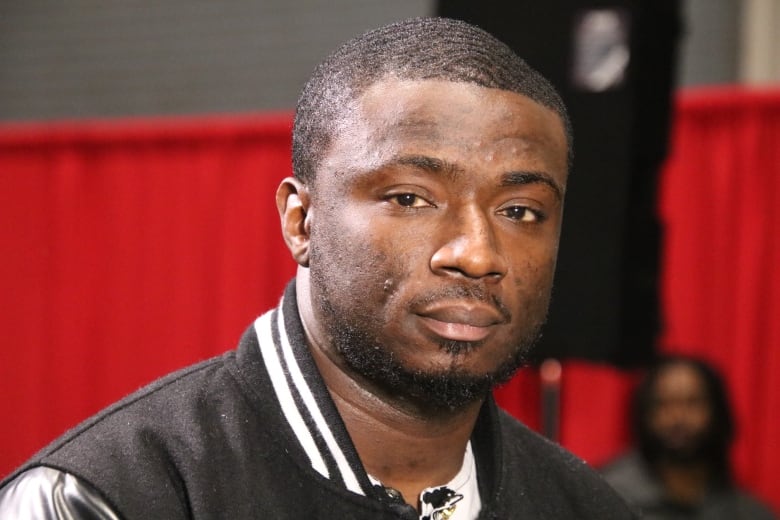 Instead of feeling innocent until proven guilty, Louis Mensah said he usually feels guilty until proven innocent whenever he is stopped by police. (Olivia Stefanovich/CBC)

Even though they have had many negative experiences, they don’t call the situation hopeless.

The young men shared possible solutions before taking to the stage on Saturday at a public speaking event.

« There’s some great cops, » said Ebenezer Oteng, a 27-year-old who grew up in Toronto’s Jane and Finch neighbourhood.

« I could be driving, bumping my music, look at an officer and I bump my head and they bump back. It’s a respect thing. » 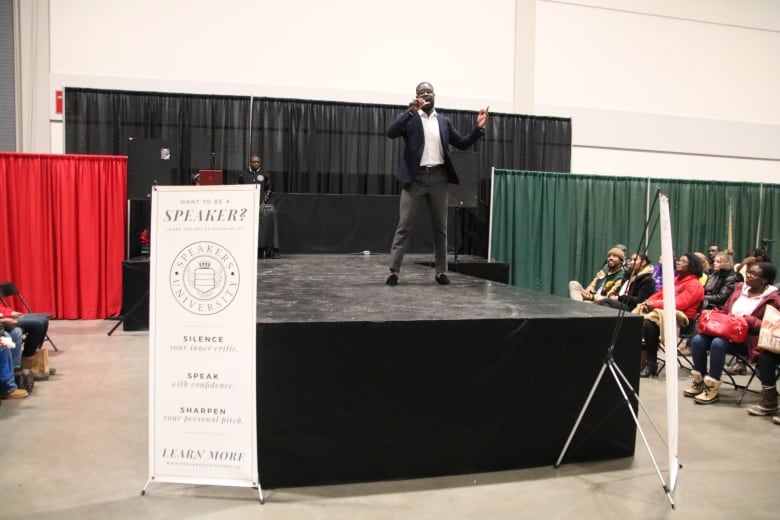 Tolu Atkinson, 26, said he was given a Slurpee coupon by a police officer in Vancouver for wearing safety equipment while he skateboarded as a child. The experience remains a good memory. He hopes police forces across the country can adopt similar positive practices. (Olivia Stefanovich/CBC)

But Oteng admits not everyone feels comfortable even saying « Hi » to officers due to fears of getting pulled over, which is something he would like to see changed from both sides.

Jeffrey Saah, 28, said he has been stopped by police multiple times, and thinks the practice of carding should be flipped on its head.

« If police are supposed to be public servants, then they should almost be like mentors to people in the community, » Saah said. 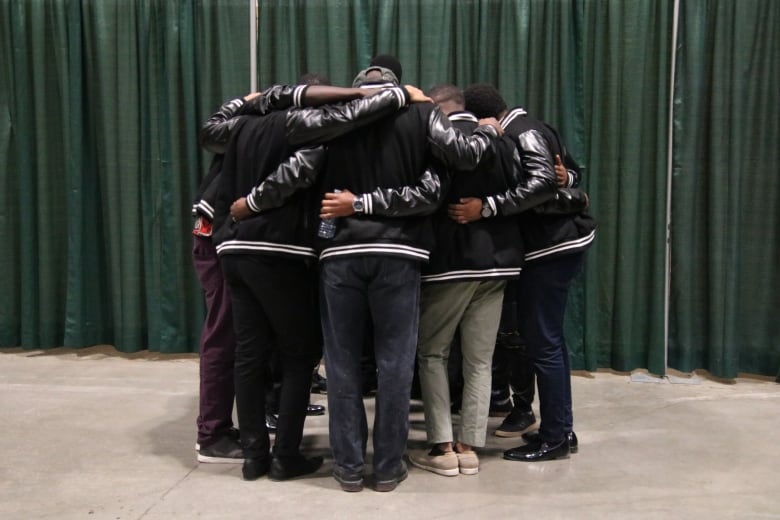 The young men embrace on Dec. 8 to lend each other support at a public speaking event. (Olivia Stefanovich/CBC)

When he was a child, he said he was given a Slurpee coupon by a police officer in Vancouver because he rode his skateboard with safety gear.

« That was a positive experience with police that needs to be implemented more often, » Atkinson said.

« That type of experience should be amplified and projected. »

Who gets to serve?

Atkinson said he would like to see more officers of diverse backgrounds so people feel reflected in their police forces.

Adjei agrees, but thinks communities should get a say in the hiring process.

« The best thing to do is to get to know people so that way when they see you in your uniform, it’s not a fear. It’s more I know why you’re coming into my community. »

Toronto police took one of Zack Noureddine’s killers to a strip club, earned his trust and then a confession. But the jury didn’t hear any of that