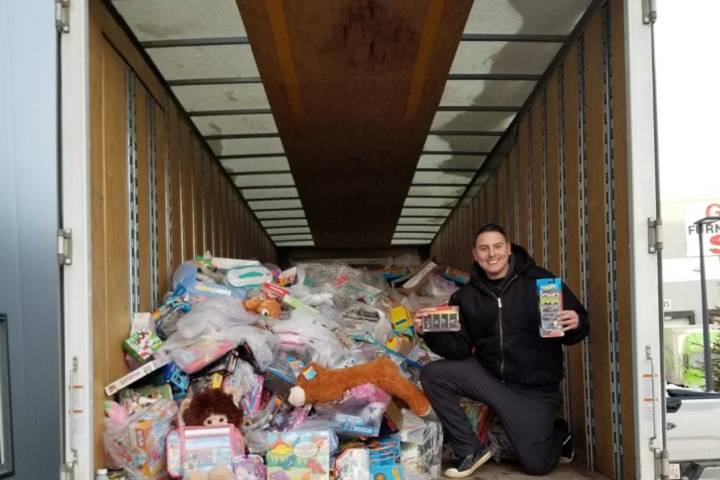 ‘Can Man Dan’ Johnstone aims to pay it forward, and now he’s breaking records in doing so.

Johnstone set the record for the most toys collected by a single person for 630 CHED Santa’s Anonymous during his four-day camp out outside of Famous Toys Warehouse.

The toys will be delivered to children across the city next weekend, and Santa’s Anonymous is nothing short of appreciative.

Though he achieved landmark success in the charitable effort, he simply will not take all of the credit.

“It’s not my record, this is Edmonton’s record,” said Johnstone.

“They’re the ones who donate. They come out in droves and see me. I just stand there like a fool.

“People were coming all hours of the day and night just to donate – whether it was one toy or 10 toys.”

Day 3 of my 3rd (of 5) winter campout for people in need this #Christmas! The sun is shining (after a terribly COLD night) & I’m filling this truck full of toys for @SantasAnonymous! Here at @YegToyBlowout (2403 91 ST SW) until Sun 5pm! Come down, donate, and say hello! #yeg pic.twitter.com/kz9oMElygs

Right now, the anti-poverty activist is on a mission for the city. He’s on his third of five camp outs, and the next is for the Edmonton Food Bank.

“It feels good,” Johnstone remarked, “but I still have a lot of work to do before Christmas.”

When it comes to exactly how he was able to raise over $50,000 in toys for Santa’s Anonymous, he said it comes down to the relationship he has with Edmonton.

“This city and I have this weird relationship where I can ask them for whatever I want,” Johnstone said. “Whether I want to fill a truck full of food, clothes, or toys, they’ll just do it — and that’s why I love Edmonton.”

But it doesn’t happen overnight. Can Man Dan is an initiative that started when Johnstone turned 18, after being on the other side of those donations.

“Growing up poor kick-started this whole initiative,” he said.

“I remember vividly some of the things I got as a kid and I wanted to keep the cycle going.

“We relied on so many different social services like the Food Bank and Santa’s Anonymous- basically every program you could think of.

“So, I turned 18 and started the whole Can Man Dan initiative and since then we’ve raised millions for our city.”

Since the initiative started, he’s helped thousands of people and there’s always another project he’s working on.

This is his eighth year of camp outs for local charities, and in total this year, he’s spent 12 days outside in Edmonton’s bitter cold climate.

“It was cold, to be honest,” he said, but he does find a way to stay warm.

“Seeing all those smiles, and getting all those hugs and handshakes, and loading all these toys into the truck, that’s what kept me warm,” Johnstone said.

“The Christmas spirit was alive and well. It was special.”

Johnstone was born and raised in Edmonton, and has a tireless love for the city.

“I love this city. There’s not a thing I wouldn’t do for it.”

He’s able to achieve charitable successes like this one because of Edmonton’s generosity — and Johnstone says it’s chart-topping.

“This is the most generous city in the entire world. I know I might be a bit biased, but I truly believe it,” he said. “I’m so glad we could help thousands of kids this Christmas.

“This victory is for Edmonton specifically.”

You can find Can Man Dan camping outside of the Heritage Safeway at 2304 109th Street from December 13th to 16th, and again at Southbrook Sobeys at 1109 James Mowatt Trail from December 22nd to December 24th.

LISTEN BELOW: Full Interview with Can Man Dan about his record-setting donation

Suspect in fatal stabbing of 17-year-old Joshua Leo turns himself in: police