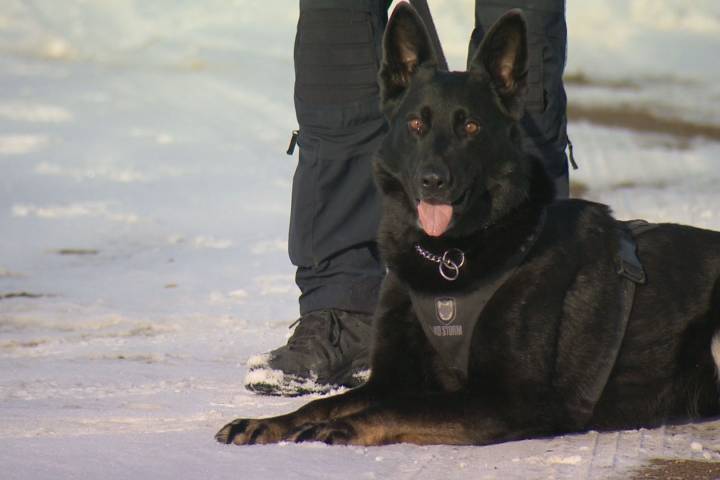 The gender of a police dog is something you might not think about, but when it comes to more males than females, the statistics show an interesting trend not just in Saskatchewan but across Canada.

Currently, the province only has four female police dogs, including one in Moose Jaw.

When it comes to solving crime, Cst. Chad Scheske and his Police Service Dog Siren are ready for any call that comes their way. “We respond to anything in progress, whether it’s break and enters, assaults, violent stuff,” Scheske said.

“The idea for us is to try and get to the scene as fast as possible, so that if there’s someone that we need to track or there’s work to be done in finding people, the sooner we’re there the better.”

It’s a bond like no other. Whether it’s tracking criminals or sniffing out evidence, Scheske and Siren have been partners for nearly three years.

Siren was purchased through the RCMP, where females make up roughly 15 per cent of all dogs currently working from its breeding program in Innisfail, Alberta.

“In our experience, it’s taken us many, many years to unlock the secrets to teach female dogs to do something in the same way that male dogs automatically do them,” said Sgt. Chris Browne, responsible for the RCMP’s breeding and imprinting program.

Browne said that’s because instinctively females don’t like to leave their handler’s side.

“A male dog has no problem leaving the handler to go and apprehend someone, or to go and do a search in a large open area without feeling the need to go back to the handler for support,” Brown said. “So we just had to adjust our philosophy to encourage our female dogs that it’s okay to be away from the handler for extended periods of time.”

Over the past four years, Browne added, the RCMP has trained and assigned more female dogs to handlers than in the previous ten years.

“I find that our female dogs are far more meticulous trackers — they are much better searchers and they have a far more balanced temperament,” Browne said. “Males sometimes are very free thinking. Sometimes we see what we call alpha behaviour in the dogs, where they will challenge the handler to be the one in charge.”

Many females are also held back for breeding, but the RCMP aren’t the only suppliers of police dogs in the country. In Ontario, the Ontario Provincial Police (OPP) only have one working female out of 27 general police service dogs.

The OPP said that’s because females are less outwardly aggressive towards chasing down a threat and the good females are usually kept for breeding.

But regardless of gender, when she’s not at a crime scene, Siren — like any police dog — spends countless hours training.

“She’s a thinker so that exposure training is really important for her,” Scheske said. “She’ll think through things a little more than the male dogs that I’ve seem to have [had], but once she gets a skill she’s really really good at it.”

At the end of the day, it all comes down to solving crime.

“Every handler wants to have a dog that’s a rock star, that goes out and catches bad guys,” Scheske said.  “It doesn’t matter if you’re male or female, big or small.”