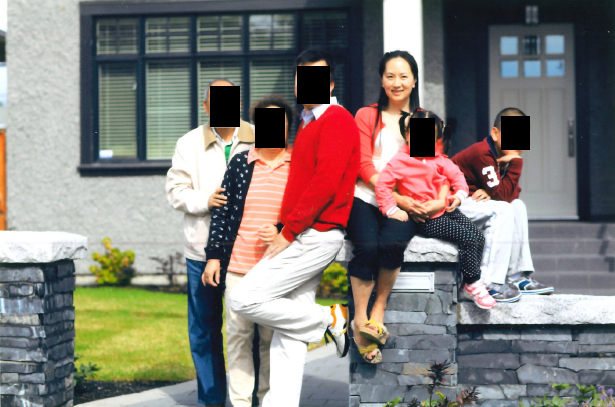 Meng Wanzhou smiles alongside her family in front of landmarks such as the Lions Gate Bridge, in newly-released photos that hint at the Huawei CFO’s life in Vancouver.

The photos, released to media following a bail hearing on Monday, show Meng in various locations such as False Creek, where she sits in front of the Burrard Street Bridge.

Another image shows her in Victoria, where she can be seen in front of B.C.’s legislature building.

Coverage of the arrest of Meng Wanzhou on Globalnews.ca:

Arrest of Huawei CFO not ‘in any way’ political: Freeland

Meng has faced a bail hearing that lasted two days; it has provided various insights into her and her family’s life in Vancouver amid concern that she could pose a flight risk if she were released.

The hearing came after she was arrested at Vancouver International Airport on Dec. 1, on allegations that she violated U.S. trade sanctions on Iran.

A Crown lawyer on Monday said she poses this risk because of her wealth and a lack of ties to Canada.

Meng Wanzhou is seen in front of the B.C. legislature building in Victoria.

Court documents released over the weekend hinted at the ties that Meng has kept on Canada’s West Coast.

Meng and her husband Liu Xiaozong own two properties in Vancouver, one at 4005 West 28th Avenue that was bought in 2009, and another at 1603 Matthews Street, which was bought in 2016, affidavits showed.

Together, the homes were assessed at just under $22 million in 2017.

Meng Wanzhou with her family.

Meng has four children; two of whom went to school in Vancouver from 2009 to 2012, while her husband was studying toward a master’s degree in the city.

Once the kids were finished school, Meng would spend “many weeks, sometimes months” in Vancouver in the summertime, an affidavit said.

“I always try to spend at least two to three weeks in Vancouver every summer,” it said.

Her in-laws had stayed at their home in the summer months since 2010, she added,

Meng’s legal team has said that she doesn’t pose a flight risk, owing partly to her links in Vancouver as well as a fear of hurting Huawei’s reputation.

“My father founded Huawei and I would never do anything that would cause the company reputational damage,” she said in an affidavit.

“I believe that breaching my bail conditions would cause such damage.”

If Meng were to flee to China, then bringing her to justice would prove that much more difficult, as the People’s Republic doesn’t have an extradition treaty with Canada or the U.S.

Should Meng be released, then private security provider Lions Gate Risk Management will have the authority to apprehend her if she breaches her bail conditions, her lawyer David Martin said Monday.

She would have 24/7 security with a driver and security team, a home security package, and she would have to provide them with a weekly itinerary, Lions Gate executive director Scot Filer said.

She would also be able to travel within a surveillance zone.

Meng Wanzhou with family near the Lions Gate Bridge.

The Crown asked Filer whether he could assure the court that Meng would be prevented from breaching her bail.

He couldn’t provide guarantees but he said he was confident that her security would “satisfy the court.”

Meng Wanzhou with family near the Lions Gate Bridge in Vancouver.

Meng has received reference letters as part of her defence.

One of them came from Fan Bao, who described himself as the CEO of Chinese Renaissance Group, one of China’s “largest investment banks and private equity firms.”

He vouched for Meng’s character, saying, “based on my experience working with her, she has come across as a person of highest professional and moral standards.

“While I’m not privy to the circumstances of her detention, I see absolute [sic] no risk for her bail. Ms. Meng is very knowledge [sic] about the international laws and regulations and holds greatest respect for them. She is also a very proud person and will only utilize legal means to prove her innocence.”

Crown lawyers have noted that none of the reference letters came from anyone from B.C. or Canada.

Here are more photos of Meng Wanzhou and her family in the Vancouver area:

Meng Wanzhou with family near the Lions Gate Bridge in Vancouver.

Meng Wanzhou with family in front of a home in Vancouver.

Meng Wanzhou with family on a beach.

Meng Wanzhou with family on a beach.

Meng Wanzhou with family in front of a home.