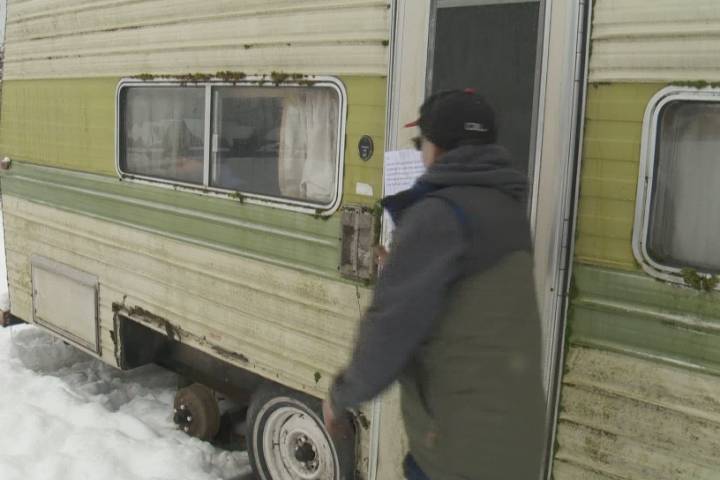 It’s snowing in Whistler and Paul Mitts is worried.

He moved into a trailer parked at the Whistler Tennis Club two nights ago, after a long stretch living in a tent with his wife.

He’s already been hit with an eviction order.

“They’re putting us on the streets. That’s what’s happening. They say, ‘Oh, you can go to shelters in Squamish or North Van. I’ve been here since 1982,” Mitts said.


READ MORE:
Housing is so bad in Whistler one business owner bought his staff somewhere to live

Like almost everywhere else on the South Coast, Whistler is facing a housing crunch, and like elsewhere in the region, people like Mitts are seeing the worst of it.

He told Global News he works as a dishwasher and prep cook in the community, and that there’s no shortage of jobs.

But finding somewhere to sleep is the challenge — even in a community that has a well-developed subsidized housing program.

“In the meantime, what do you do? Bylaws runs around the forest, ‘Aw, you can’t camp here, we’re going to fine you.’”


READ MORE:
1-bedroom apartment in Whistler lists for $6,000 a month

Camping or sleeping in a vehicle on city property is against Whistler bylaws.

The resort municipality is undertaking efforts to ease the housing crunch.

A recent Whistler survey found that 81 per cent of the workforce that keeps the lights on, the lifts running and the coffee fresh does live in Whistler itself.

“We don’t know the nature of that accommodation,” acknowledged Marla Zucht with the Whistler Housing Authority.

Zucht said the resort municipality maintains a stock of housing that ranges from low-income seniors’ accommodations to market rentals, and said more purpose-built rental is under construction.

But she admitted that waitlists have lengthened in the years since Whistler benefitted from a large infusion of housing built as the athletes’ village for the 2010 Games.

In the meantime, that leaves Mitts with few options.

He said if his trailer is towed away, it will leave him homeless once again, this time without a tent site thanks to the buildup of snow.

“Whistler’s got to wake up, get this housing thing going on, put some part modulars up. It’s worse than I’ve ever seen it in my entire life up here,” Mitts said.