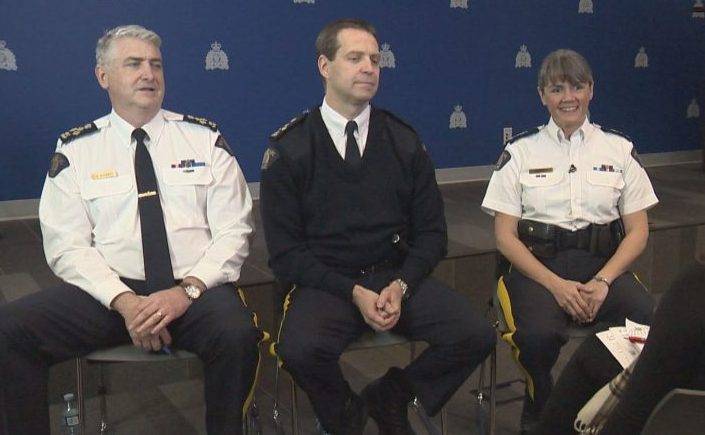 With 2018 nearly in the rear-view mirror, the B.C. RCMP’s leadership team reached out to Global News to provide their perspective on the year that was.

Deputy Commissioner Brenda Butterworth-Carr said she wanted to take the opportunity to reflect on the force’s successes and challenges as well as to highlight the complexity of some of the operations that RCMP officers faced in the past year.

Among the accomplishments the deputy commissioner wanted to highlight was the technological advancement the force has been taking on.

“We’ll be piloting digital evidence, continuing to advance our interactions with Crown…those are things where we can take advantage of modern technologies that are available to us,” she said.

The conversation quickly veered towards one of the biggest stories the B.C. RCMP faced in 2018: the public inquest into the suicide of Sgt. Pierre Lemaitre.

WATCH: Coverage of the Pierre Lemaitre inquest on Globalnews.ca

Inquest into suicide of former RCMP spokesman gets recommendations

Lemaitre was the force’s spokesperson during the fallout from the Tasering death of Robert Dziekanski at Vancouver International Airport in 2007. The inquest found Lemaitre was traumatized after being forced by his superiors to lie about the circumstances that led to Dziekanski’s death; Lemaitre took his own life in 2013.

Butterworth-Carr said she wasn’t in a position to say whether Lemaitre was betrayed by the RCMP but noted that she and the force had learned lessons from the inquest, which made recommendations for improvements in supporting the mental health of RCMP officers.

Assistant commissioners Eric Stubbs and Kevin Hackett, who joined Butterworth-Carr for the interview, agreed that a progressive culture is necessary and that the leadership team is committed to improving the RCMP’s workplace culture, although they’ve also heard positive feedback.

“There are a lot of challenges that the RCMP is facing operationally, administratively and internally, perhaps,” Stubbs said. “But all three of us travel the province on a regular basis, and we’re in town halls and detachments and we’re talking to our members a lot and we see a lot of positivity out there.”

“If people feel like they’re respected in the workplace, if they feel they’ve got meaningful work and contribute and they’re listened to, then that will increase morale,” added Hackett.

To date, more than 3,000 women have made harassment claims against the RCMP as part of a class-action lawsuit. When asked if she had ever faced harassment in her career, Butterworth-Carr was diplomatic.


READ MORE:
‘Nothing has changed’: Ex-Mounties take aim at RCMP during inquest

“I’ve certainly worked with challenging individuals earlier on in my career,” she said.

“I can’t speak to the reasons they behaved the way they did, but I can tell you that in the course of my career I’ve been very willing to stand up and convey challenges or things that needed improvement and continued to provide that environment.”

WATCH: Coverage of Surrey’s switch to a municipal police force on Globalnews.ca

As for Surrey’s decision to move to a municipal police force, Butterworth-Carr wouldn’t say if she thought there was any possibility the RCMP might stay in the city.

The new Surrey city council severed its contract with the RCMP shortly after entering office in November, the first step in its plan to create its own municipal police force within two years. In the meantime, the deputy commissioner said she was concerned about shortfalls during the transition.

“I think whenever we see a potential lack of investment it causes me angst, and that would be the same with any of our municipalities,” she said.

As for the future, Butterworth-Carr said her leadership team plans to take further steps to push the force into the modern age.

“Certainly being a lot more tenacious within the social media environment as well and equipping people with the ability to get out in front of news stories,” she said.

“[We want to] be proactive and take opportunities when they present themselves.”

With his focus on stability, Justin Trudeau has at least one thing in common with his predecessor