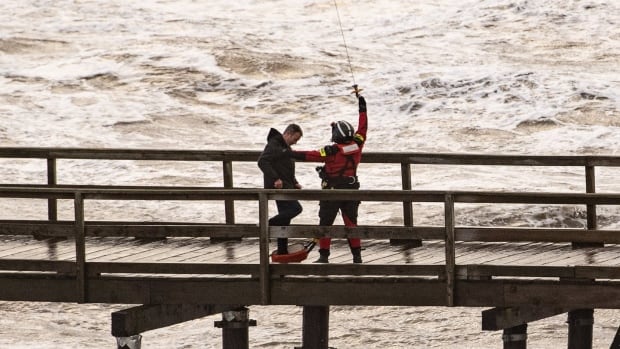 The man who ended up on the wrong side of a crumbling pier during a « devastating, » deadly windstorm on Thursday says he wants to apologize for his « foolishness. »

Oren Perry, 42, was caught on the far end of the pier in White Rock, B.C., after it collapsed in the early afternoon. Waves churned by 90 km/h winds had ripped nearby boats from their moorings and sent them crashing into the century-old pier, beating against the wooden beams until they cracked apart.

Other people on the pier ran back to safety at the first signs of collapse, but Perry says he didn’t feel safe.

« Embarrassing. That’s about it, » he said of being the only one caught on the wrong side.

The mayor of White Rock said Thursday’s windstorm was the worst he’s seen in his 50 years as a city resident. Gales led to fallen trees across the province’s South Coast, killing one woman on Vancouver Island and knocking out power to tens of thousands of homes over the course of the day. 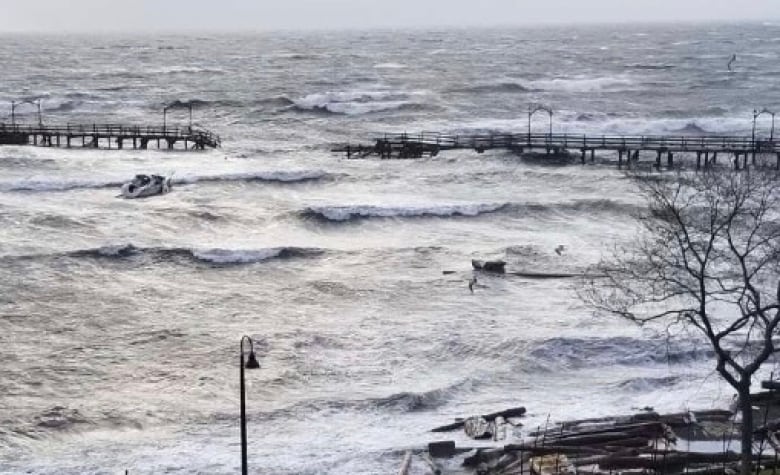 The 104-year-old pier was badly damaged in Thursday’s windstorm. (Submitted by Max McGratten)

Hopes to wait it out

Perry went to the beach with his wife and son around noon Thursday. They were storm-watching from the beach promenade, but Perry’s wife and son went inside a restaurant for a break when the weather worsened.

« The waves were a little bit too big for my son, who’s two, and he was nervous, » Perry said over the phone Friday.

Alone, he decided to walk down the pier to join the crowd watching the waves and boats — « the excitement of the storm, » he said, adding that he’s watched storms from the pier before.

Perry said it took a few « tries » before boats started to break through the beams holding up the 104-year-old pier.

« At first, I was stuck with some other people and it didn’t seem like it was safe enough to cross, and I thought, ‘Well, the storm is going to die down in about an hour and we’ll just wait it out,' » Perry said.

He said he walked further out to get away from the break. Meanwhile, RCMP were onshore shouting for people on the pier to sprint to safety.

Everyone did, except Perry.

« I guess the police showed up to encourage the other people to run through, but I didn’t know … then I wasn’t close enough to make it a make across in time, » he said. « It didn’t seem like it was safe enough to cross. »

Eventually, a section of the pier tore away from the rest and left a gap over the ocean. 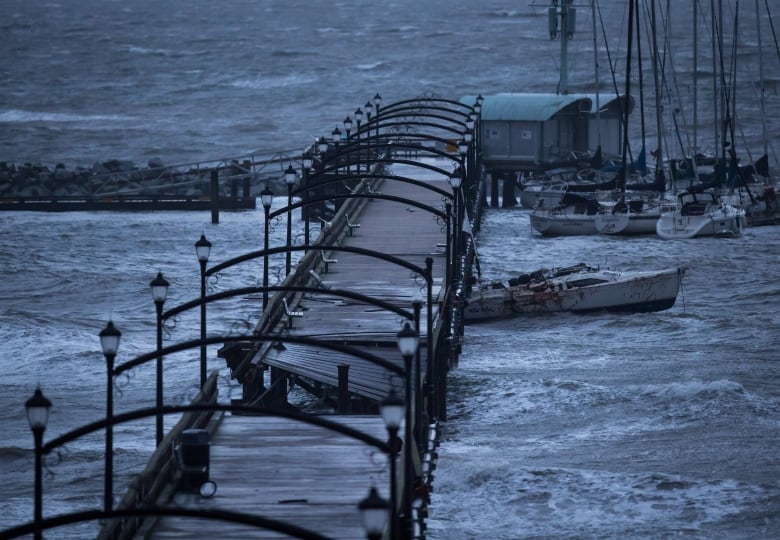 A boat is battered by waves and is slammed into the White Rock pier, which was severely damaged during a windstorm on Thursday. (Darryl Dyck/Canadian Press)

Perry said he hoped to wait out the storm on the far end of the pier, but a Royal Canadian Air Force helicopter from Vancouver Island lifted him to shore just after 3:30 p.m.

« Shout-out to the first responders. They did a great job — all of them, » he added. « And I have to apologize to everybody for getting stuck out there. »

Oren Perry, in black, wraps his arm around his wife after being rescued from the end of the landmark pier in White Rock. (Tom Ewasiuk)

The pier was open when Perry walked across. RCMP shut down the area after the collapse and it remained closed Friday.