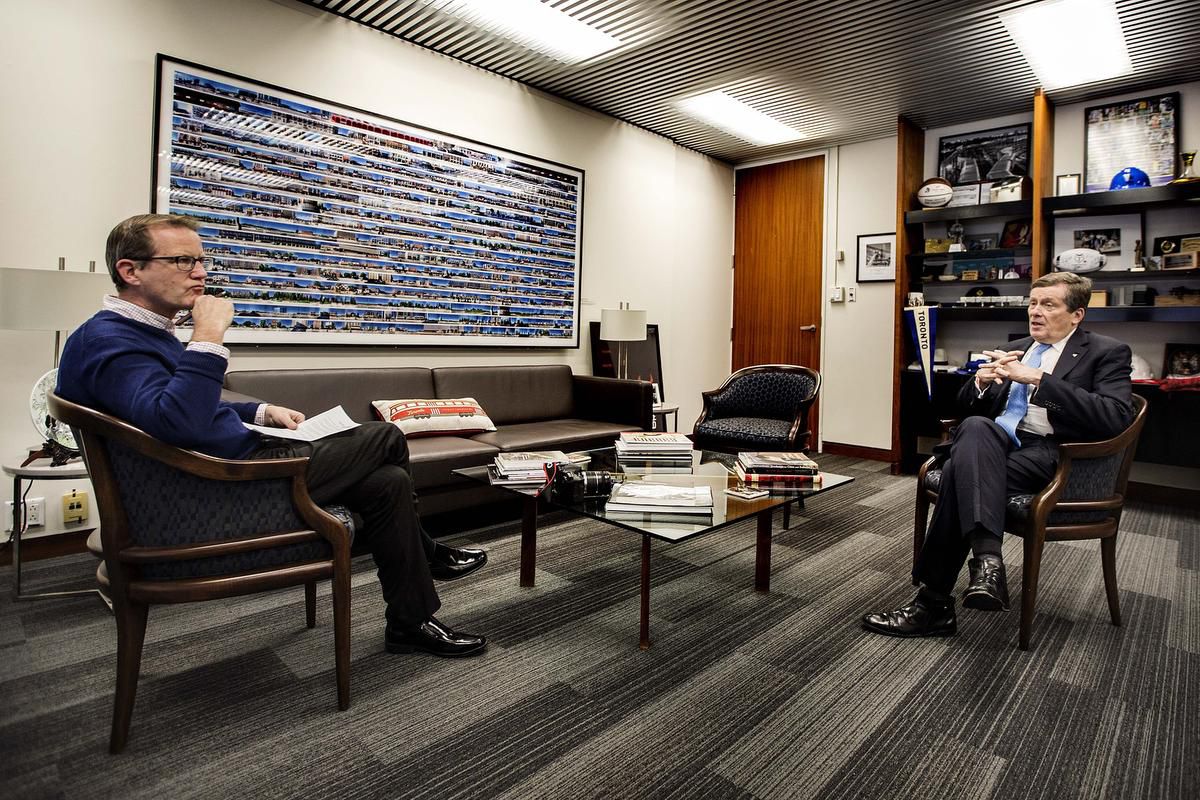 Mayor John Tory wants to keep a lid on Toronto police salary hikes but says officers don’t compare themselves to other city employees who got below-inflation raises.

Tory made the comment in a year-end interview with the Star Thursday, as he reflected on four years in office and the fresh four-year mandate that lies ahead, thanks to his commanding autumn re-election win.

Tory said he and fellow members of the police services board will soon give negotiators guidelines for talks with the Toronto Police Association, which represents more than 8,000 officers and civilian employees.

Tory’s administration bargained hard in 2016 with city inside and outside workers represented by CUPE locals, winning below-inflation hikes of about 5 per cent over four-year contracts.

The mayor said he is inclined to see a “relevant comparison” between contracts, but said they aren’t “apples to apples.” Police union officials “negotiate more within the context of what other police officers in the province are making,” rather than other workers paid by the city, he said.

Toronto police first-class constables this year earned a $98,450 base salary, but those receiving maximum “retention pay”, a bonus that survived the last negotiation, earned $107,312. The total police budget will cost taxpayers just over $1 billion this year, most of it in salaries.

“Being a police officer is the most complex policing job that probably exists in the province and they do a very good job at it …,” Tory said. “Ideally, you would have something that is consistent with the overall desire I have as the leader of the council, which is to run a government that can expand services and manage affairs responsibly, but within the context of a low (property) tax increase.”

Another big challenge for Tory in 2019 will be dealing with Premier Doug Ford, the former councillor who settled into office by slashing the size of council in mid-election over the objections of Tory and his council colleagues.

The mayor said the two have since had productive meetings, but acknowledged the busy agenda of Ford’s Progressive Conservative government has not included passage of regulations allowing for the use of traffic wardens, rather than paid-duty police officers at busy intersections, or for the city to issue traffic tickets using photo radar in school zones.

Tory said much of the city’s wait on those safety initatives happened under the previous Liberal government but he remains frustrated. “To me, it underlines that, on these matters, we shouldn’t have to go and ask. We should have the latitude to … make the decision ourselves.”

Nor has the Ford government committed to honoring his predecessor’s pledge to reduce GO train fares within Toronto to $3 to integrate with TTC prices.

“All (the province) has said to me so far is they’re looking at reducing those fares to reduce the gap between the two (fares), but I have no commitment that they are going to do what had previously been agreed upon” and was to have taken effect Jan. 1, Tory said.

Fare integration could help relieve acute congestion on Toronto’s subway lines because riders, especially those in Scarborough, have told him they’d switch to GO for daily commutes if the prices were the same, the mayor added.

It is unclear what say Toronto will have over SmartTrack stations it has agreed to fund in conjunction with provincial Metrolinx’s regional electric rail expansion; the province wants to develop new GO stations in partnership with private developers in exchange for “air rights” to build above the stations.

“I’m not afraid of any of this,” said Tory, who added that the city should examine provincial requests-for-proposals on station development, but, if it doesn’t like the proposals, should be allowed to stick with paying for a station, itself, and deciding on the design.

“I’m quite willing to take a look at the results of such a process, but (am) always quite mindful of the need to have proper planning, and the need for us to have development which is compatible with what is going on in the rest of the city,” Tory said.

Any provincial attempt to using ministerial zoning orders to overrule city zoning guidelines for SmartTrack station construction would be “a serious issue between the City of Toronto and the province of Ontario”, Tory said. “I just don’t anticipate that is what their plans are.”

In his 2017 year-end interview with the Star, Tory said if he won a second mandate he would work more closely with progressive downtown councillors.

His recent choices for committee chairs leaned heavily on past suburban allies, with only, Ana Bailão, from the Toronto-East York community council, a downtown representative. The mayor says now that he honoured his pledge because he tapped Joe Cressy and Paula Fletcher for key posts at city agencies.

“I looked (the pledge) as being a greater inclusion of downtown councillors in the decision-making process of the government … consistent with my own obligation to move the mandate forward that I’ve been given by the people,” to expand transit, increase affordable housing and keep taxes low.

Since re-election Tory has opened the door to the possibility of seeking a third term, something he previously said he would not do. He now says that door remains open, but, as he starts his second term, he is not giving it any thought.

“It’s nothing to do with legacy; it’s everything to do with trying to address transit and housing and build a great city,” the mayor said. “If I saw a threat to that, that might cause me to make a decision that would be more likely to try to continue as mayor.”