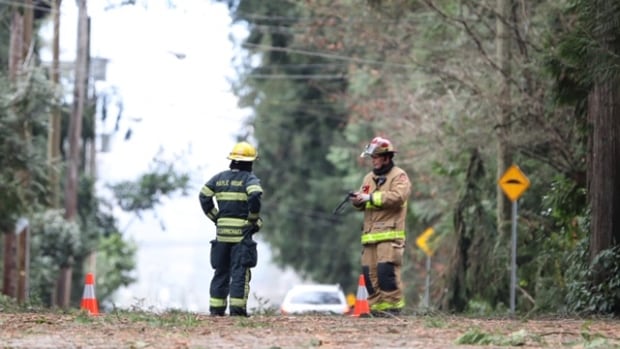 About 66,000 homes across B.C.’s south coast are still without power after a windstorm caused extensive damage to BC Hydro infrastructure on Thursday.

BC Hydro says crews are working until power is restored to homes on Vancouver Island, the Sunshine Coast and the Lower Mainland.

« Due to the extent of the damage, many customers will be without power throughout the day and for some customers it could be a couple of days, » BC Hydro said in a written statement on Saturday morning.

Environment Canada said gusts hit 128 km/h across Metro Vancouver, Vancouver Island and the Fraser Valley on Thursday. The strongest winds were clocked at 144 km/h on a small island near Tofino.

Most of the damage to power lines, power poles and transformers was on Vancouver Island, where a total of about 55,000 homes are still without power. 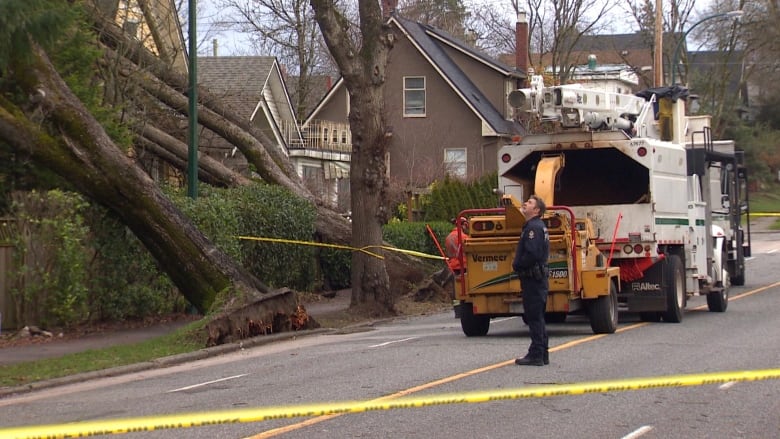 A Vancouver police officer looks up at a tree that fell onto a house in Vancouver on Thursday. Hydro says more than 800 personnel are working to repair widespread damage. (CBC)

In the Lower Mainland, crews are working to restore power to more than 15,000 customers.

BC Hydro says over 800 field personnel are working around the clock to repair the damage. It says the storm was one of the worst windstorms it has experienced in 20 years.

More than 530,000 customers have gotten their power back since the storm hit on Thursday. Updates can be found on BC Hydro’s website.

In Nanaimo, officials are urging residents to conserve water as the city continues to repair its water treatment plant, which was also damaged in the storm on Thursday.