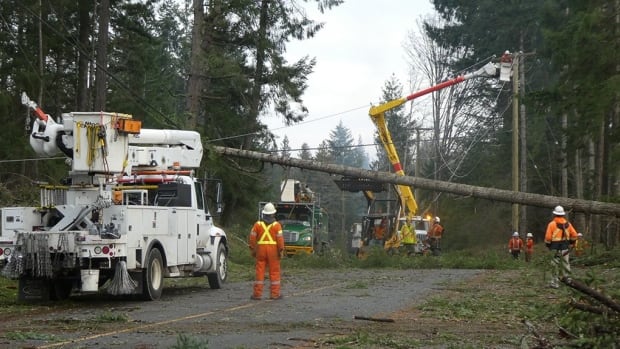 About 44,000 B.C. homes are on their fourth day without power after a powerful windstorm hit the south coast, and it’s likely to be a while longer before crews can fix the damage in some areas.

On Sunday morning, BC Hydro said its personnel had restored power to over 550,000 customers since Thursday’s storm — one of the worst it has seen in 20 years.

But impassable roads blocked by downed power lines means crews can’t fully assess the worst of the damage on some of the Gulf Islands and in Vancouver Island communities like Duncan, Nanaimo and Lake Cowichan.

yes it’s likely power for customers listed as ‘out’ will still be off on Christmas Day. These communities are some of the hardest hit from the storm and are requiring many new poles, among other repairs, to bring them back. Thank you for your continued patience,

BC Hydro said it has brought in additional personnel from Alberta and Eastern Canada to help out, but it still expects it will be several days before power will be restored in hard-hit and remote areas.

In the Lower Mainland, there are still 4,000 customers without electricity. BC Hydro says that even there it could take up to 36 hours before the power is restored.

Environment Canada said gusts hit 128 km/h across Metro Vancouver, Vancouver Island and the Fraser Valley on Thursday. The strongest winds were clocked at 144 km/h on a small island near Tofino.

Updates on power outages can be found on BC Hydro’s website.