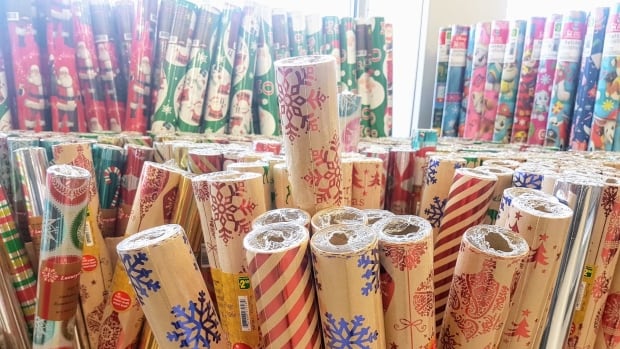 All that twinkly, glittery garishness associated with Christmas wrapping makes for a flashy presentation but it’s most definitely not a gift to the environment, says Winnipeg-based Green Action Centre.

So while we’re dreaming of a white Christmas, we need to think more green, the group says.

« It’s quite crazy, actually, the statistics surrounding how how much waste we are sending to a landfill around the holidays, » said Bethany Daman, a co-ordinator at the centre, which develops and advocates for environmental policies for Manitoba communities.

« The stats that we have is approximately 550,000 tons of wrapping paper is thrown out, so it goes to the landfill, in Canada each year. »

That includes things like the shiny wrapping paper as well as the glossy gift bags and the tissue paper used to cover the gifts inside those bags, Daman said.

« All three of those items are not recyclable in Manitoba and the reason is they contain the glitter and they contain plastics, » she said.

« There’s coloured shapes in there mixed with wax, metal and clay content and some of it’s laminated, so there’s too many additives, making it difficult to recycle. » 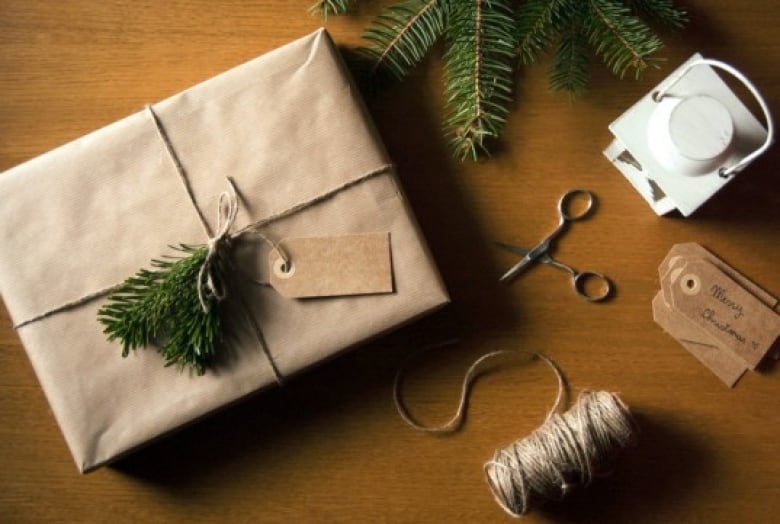 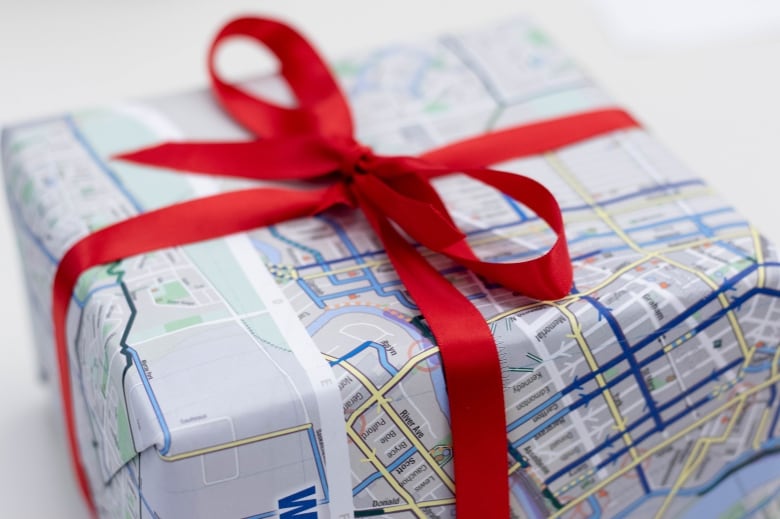 The Green Action Centre tries to help people come up with alternatives that take the unnecessary glitz out of gift wrap.

« If you have a scarf or something, you can actually turn that into quite a beautiful wrapping piece. You can use the ends of the scarf to make a bit of a bow at the top, » Daman said.

« Or something that someone in our office is doing this year is using tea towels to wrap her gift. »

Other suggestions include using plain paper that comes in rolls, like the brown kraft stuff used to wrap packages for shipping.

Decorate it with stamps or markers or « get crafty and make your own embellishment from paper, string, leaves and twigs, » says Environmental Defence, a Canadian environmental action organization.

Or find old magazines and make a collage, Daman suggested.

« If there’s a little bit of glue, it’s going to be fine to put in the recycling after. As long as [you’re not using] glitter glue or an excessive amount of paper glue, that’s gonna be totally fine, » said Daman, and she agrees that markers and stamps are a great way to dress it up. 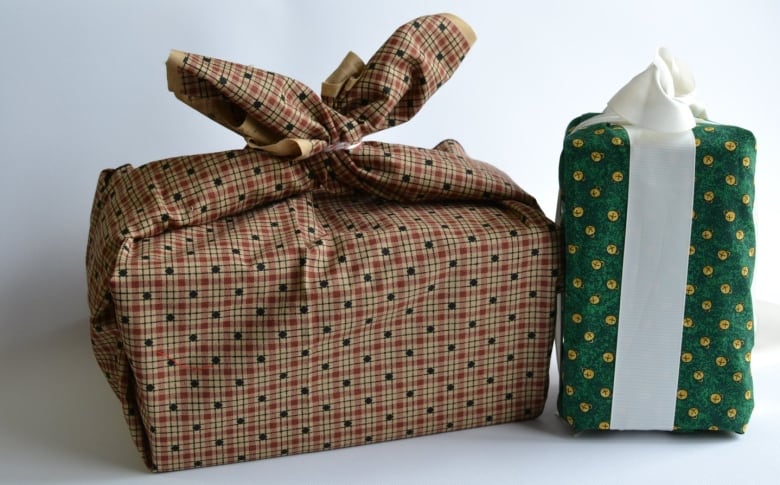 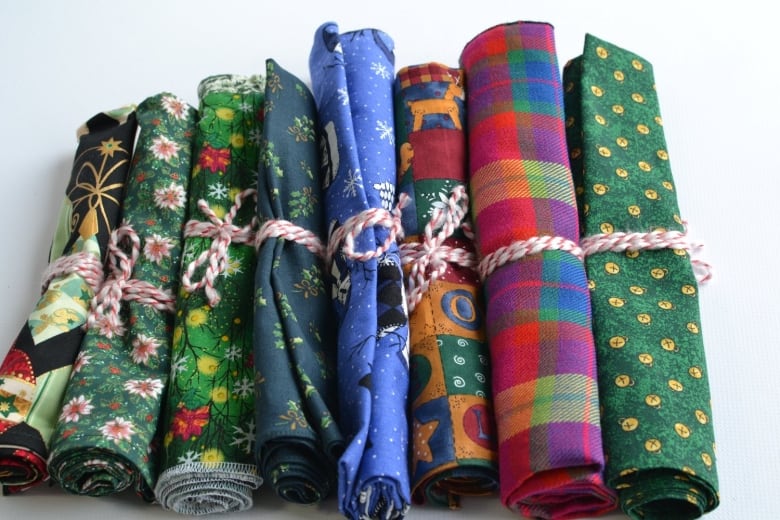 Fabric comes in many colours that can be as festive as glossy Christmas wrap, but lasts longer and is more friendly to the environment. (Submitted by Anna-Marie Janzen/Reclaim Mending)

Same with a little bit of brushwork. But only a bit.

« If you’re doing a bunch of painting on it, that’s not going to be OK to recycle, » she said.

Not only are these options better for the environment, they show the person getting the gift that there’s been a lot of thought put into it.

« I definitely think that that ends up being a more special way of presenting the gift as opposed to just going to the mall, picking something up, getting it wrapped and then just presenting it to them, » Daman said.

« It’s something that you remember for so much longer when you’re actually having that effort put in. » 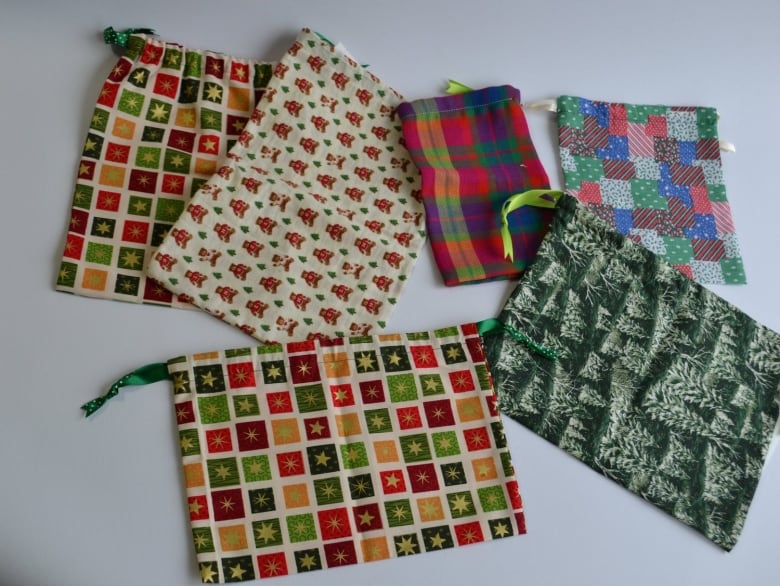 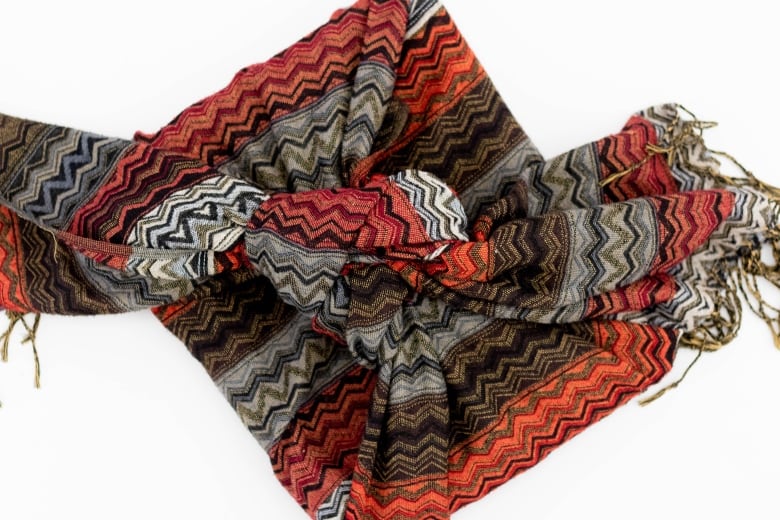 « If you have a scarf or something, you can actually turn that into quite a beautiful wrapping piece. You can use the ends of the scarf to make a bit of a bow at the top, » says Green Action Centre’s Bethany Daman. (Green Action Centre)

If wrapping isn’t your preference, an option is to get reusable cloth Christmas bags, Daman said.

« They have holiday designs on them and a lot of them are made from reclaimed material, so you can just use that bag over and over again from year to year and you can buy them in a variety of sizes. »

Substitutes can even be found for the tissue paper, said Daman, who recently put together a gift for a friend who likes cycling. 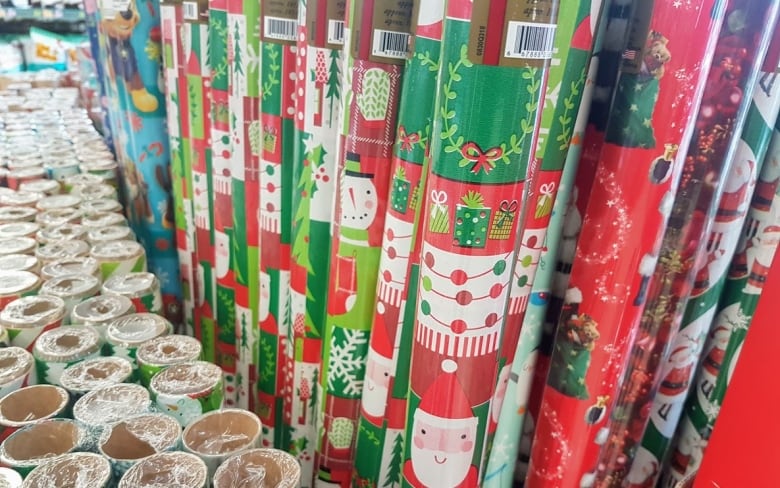 Most coloured, glossy paper cannot be recycled because of the inks and other additives. (Darren Bernhardt/CBC) 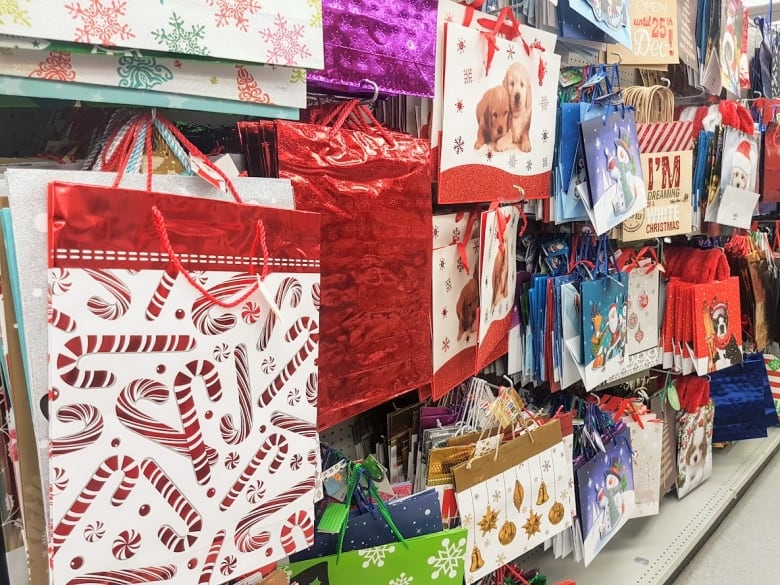 Like the shiny Christmas wrap, these types of gift bags cannot be recycled, but you can reuse them to extend their life and keep them out of the landfill as long as possible. (Darren Bernhardt/CBC)

« I took an old cycling map and I used that as tissue paper in the reusable shopping bag. It was something that was going to get recycled anyway because it was an outdated map, but I was able to use that in a creative way that also reflected something of the person, » she said.

If you happen to be on the receiving end of a glossy gift bag, the best way to contribute to the environment is to save it and get as many additional uses out of it as possible before it goes to the landfill, Daman said.

« If your parents and grandparents are anything like mine, they probably also save all their wrapping paper and carefully fold it up to be reused next year. This might seem old fashioned, but it’s actually a great attitude that we could all use a little more of. »

While recycling is important, reusing is better, « because an endless stream of recycling isn’t sustainable, » Daman said.

« There’s still resources going into processing that recycling, so we have to think about always reusing what we have and then finding a recyclable alternative. »‘

And in the end, that’s a present to everyone.