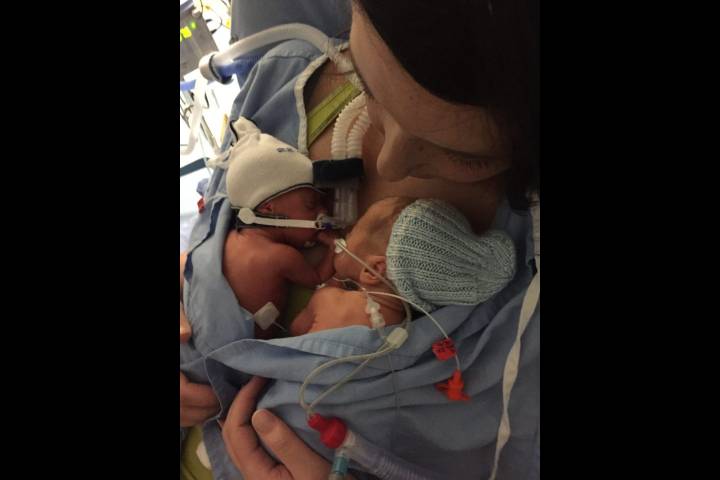 Three-year-old Ben Weller uses a walker to get around, but his family is hoping a surgery available in the U.S. could help him walk freely.

Ben and his twin brother were born 11 weeks early.

They were too tiny to bottle- or breastfeed so they spent the first two months of their lives hooked up to oxygen and feeding tubes in a Vancouver hospital, their mother Stephanie Weller said.

Then, during their six-month checkup, the Wellers’ world changed forever.

“Time just stopped,” Stephanie said. “I just looked at him: he was sitting on this table, and I thought, ‘He never even got a real chance.’”

Ben’s condition affects his legs and arms, making them stiff and contracted, and permanently affects muscle control and co-ordination, she added.

“Our physiotherapist said it’s like if you have an extremely tight elastic band around your legs and hips always trying to snap them back together,” Stephanie said. “That is what Ben feels when he is trying to move.”

But the family wasn’t willing to give up.

After extensive research, they found a doctor in the U.S. who offers a specialized spinal surgery.

“They would open up the base of Ben’s spine and use electricity to pinpoint the nerves that are connected to the damaged part of his brain,” Stephanie said.

The nerves that connect the damaged part of the brain to the spastic muscles are then severed, she added.

“It doesn’t cure cerebral palsy because it’s not curable. It doesn’t fix his brain, but it severs the part of it that causes that.”

Ben would require extensive therapy following the surgery, but the family is hopeful he would eventually be able to walk on his own.

“He has to relearn everything: how to walk, how to move, just the feeling of not relying on that spasticity anymore because that will be gone,” Stephanie said.

After extensive testing, the three-year-old was recently approved for the surgery.

It comes with a hefty price tag. The family estimates the cost of the surgery, transportation, hotel stays and therapy to be around $100,000.

His parents say it would be worth it.

“Just being able to move like his brother, to be able to run around the yard and to chase a soccer ball,” his father Dallas Weller said.

If Ben doesn’t receive the surgery, he will likely be in a wheelchair by the age of five, his mother added.

“There is no insurance company in Canada that will cover this so we were literally going to sell everything because … this is our kid, and we want the best for him,” Stephanie said.

As Ben sits on the waiting list for the surgery, friends and colleagues started a GoFundMe page that has since raised thousands of dollars.

The family says the community support has been overwhelming.

“You have to do what you’ve got to do for your kids. Everything else is all material,” Stephanie said.

“And if we can give Ben the opportunity to walk, there’s nothing that I would not do for him for that at all.”