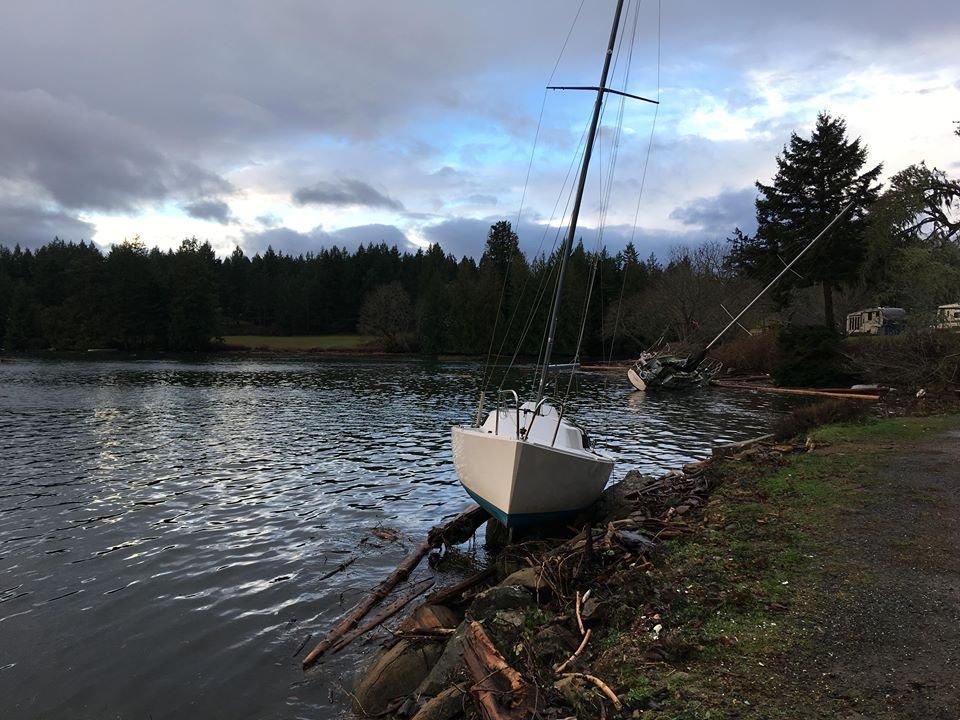 The tragedies that befell the First Nation were echoed throughout much of British Columbia this holiday season following a powerful storm that battered the province on Thursday. Tens of thousands of people have been left without power.

But locals are banding together to make the most of a gloomy situation.

“We are a pretty tight-knit community. If we have the means to help, then we do it. Looking after each other is the way that we are getting by,” Seymour said in a phone interview. “Everybody is praying they’re going to get hydro today. They would love to be home for Christmas Day.”

Heavy rain and 100 km/h winds uprooted hundreds of trees, one of which struck and killed a woman in her early 20s on Thursday morning. Then in the evening, as 16 community members sat by candlelight, one candle tipped over, causing an out-of-control house fire. A falling tree sliced through the living room of another home, which housed 12 people.

As for the rest of the community, “they have no idea what they’re going to do for the holidays,” Seymour said.

“We are looking at families that have to find someplace else to get together. They can’t have their usual turkey dinners, and I don’t know how they’re working that out … They may be eating something cold by candlelight.”

Though the largest First Nations band in B.C. has been hit hard, Seymour said community members with power — just under half of the population of 5,000, he estimates — are opening their doors for people in need of a hot shower, a stove or even filtered water. Roughly 35 households are struggling to access clean water.

But his biggest concern is for elders with mobility issues, given that they’re not expecting power to be back on until the new year. Seymour spent Monday morning phoning around to ensure there’s plenty of dry wood to burn on their wood stoves.

BC Hydro reported there were roughly 20,000 British Columbians without power as of late Monday morning. A large number are on Vancouver Island including the Cowichan Valley and Galiano Island, said Tanya Fish, the Crown corporation’s spokesperson.

Repair crews have been working 24-7 in the face of hundreds of downed power lines and trees. The Ministry of Transportation has been assisting with cleanup.

But the most affected areas will be without power on Christmas Day, Fish noted.

“Customers in these areas have been really amazing. They’re bringing coffee, hot chocolate and food out to crews to show their appreciation,” Fish said.

Meanwhile, on Galiano Island, several residents told StarMetro that their cellphones have been their “life blood.”

When the power went out Thursday, resident Tobi Elliot said, the community naturally stepped up to help one another. She spoke to StarMetro for 10 minutes on her way to deliver drinking water on Sunday as her cellphone dwindled to one per cent battery life and died.

Locals immediately “grabbed their own chainsaws” and started clearing trees from roadways, she explained. Since debit and credit machines were down, people were sharing cash for essentials such as gas. Others were delivering jugs of fuel for those who needed gas. Clean water was also a commodity, as it was completely sold out by Saturday.

Then late Sunday night, six boats came loose from their moorings and proceeded to thrash violently in the water. One Galiano resident, who lives on a houseboat in the harbour, spent the night unhooking boats and fending others off.

“He and other people worked through the night to make sure there was minimal damage to the boats. He saved three, and three were beached,” Elliot said on Monday morning.

The town prepares an annual “spirit feast” on Christmas Day that serves roughly 250 people. But the community hall is located on the south end of the island, without generators or heat. Elliot said the dinner was almost cancelled.

“Everybody’s families are arriving today, and we’ve all been wondering how to cook a turkey dinner when you have no power,” she said.

But organizers and volunteers decided “we need to do it this year, more than ever.” They’ll be serving hot turkey sandwiches, cider, coffee, tea and cookies — all made in a propane-powered commons kitchen.

While speaking to StarMetro by phone Monday morning, Elliot said power was starting to go back on around the town centre. She was hopeful she would get a chance to bake some sockeye salmon, which is thawed completely after more than 72 hours without power.

“I’d already accepted Christmas would be a lot different this year,” she said. “We are potentially cut off from services in cities. You learn to look after yourself and your neighbours.”

BC Hydro will continue to update its website with outage repairs.