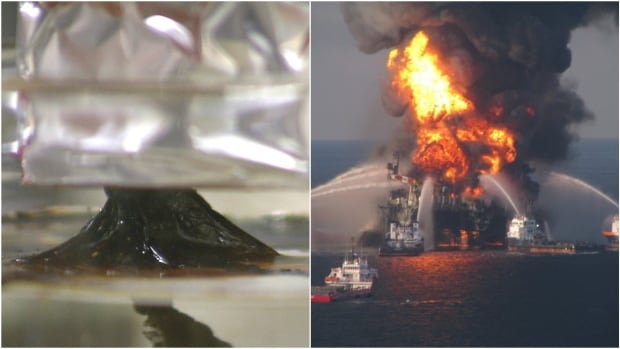 Engineers at the University of Calgary say they’ve come up with a fresh and effective new technique in the global hunt for a better way to clean up oil spills.

The process uses a material they call a « super sponge. » It’s non-toxic and biodegradable, to boot.

To demonstrate, Nashaat Nassar puts bitumen into a two-litre glass container filled with water and then flicks a switch. The mixture is shaken and stirred.

The chemical engineer and associate professor then sprinkles on it a dark powder — a magnetic chemical compound of boron nitride. 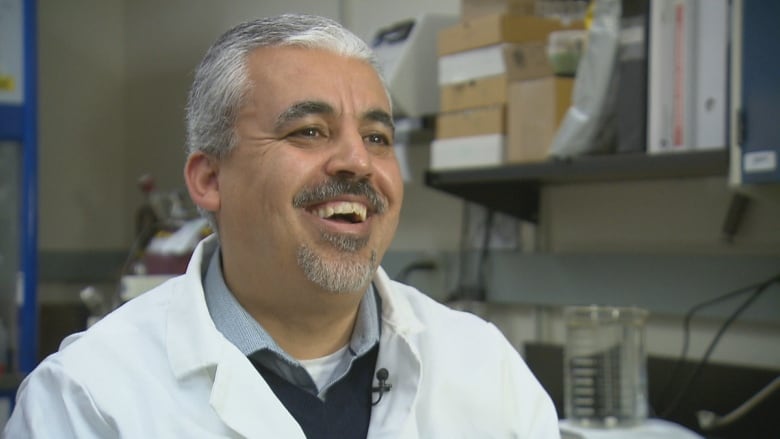 Nashaat Nassar, a chemical engineer and associate professor at the University of Calgary, is part of the ‘super sponge’ research project. They hope to test it on a larger scale. (Dave Rae/CBC)

At a microscopic level, the material is extremely porous, kind of like a sponge, says Nassar as he demonstrates by hovering a magnet wrapped in foil over the oil and sucks it right out of the water.

« With this material, we can minimize the spread of the oil, » he says.

The « sponge » also has the benefits of being non-toxic and inexpensive to produce, Nassar says.

The innovative project is part of a burgeoning area of research in oil spill cleanup. 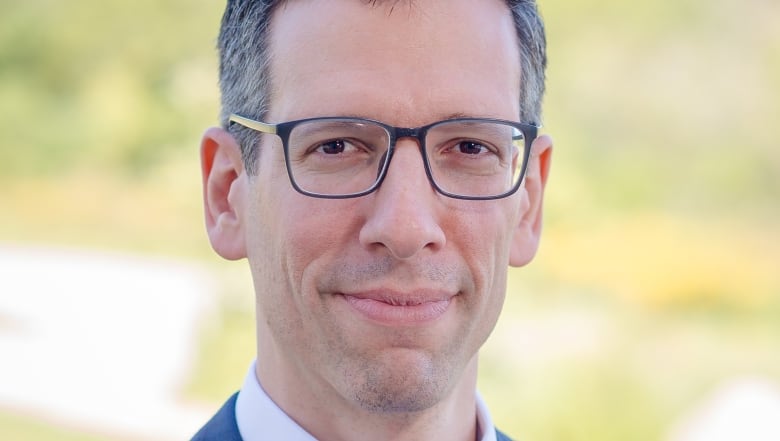 Seth Darling is a scientist at the Argonne National Laboratory in Illinois, where work is ongoing on another possible sponge solution to oil spill cleanup. (Submitted by Seth Darling)

Similar research in the U.S.

Scientists at the Argonne National Laboratory just outside Chicago are working on another spongy solution. Theirs uses specially treated sheets of polyurethane foam that can soak up oil.

« You can pick it up, squeeze it like a kitchen sponge, and the oil will come out, » said laboratory scientist Seth Darling.

« We went out there and demonstrated very clearly that you could pick up oil slicks off the surface of the ocean, out there in the real world, deployed from a boat. »

Darling says the Deepwater Horizon explosion in 2010 — when millions of barrels of oil gushed into the Gulf of Mexico — prompted many scientists to rethink cleanup technologies. 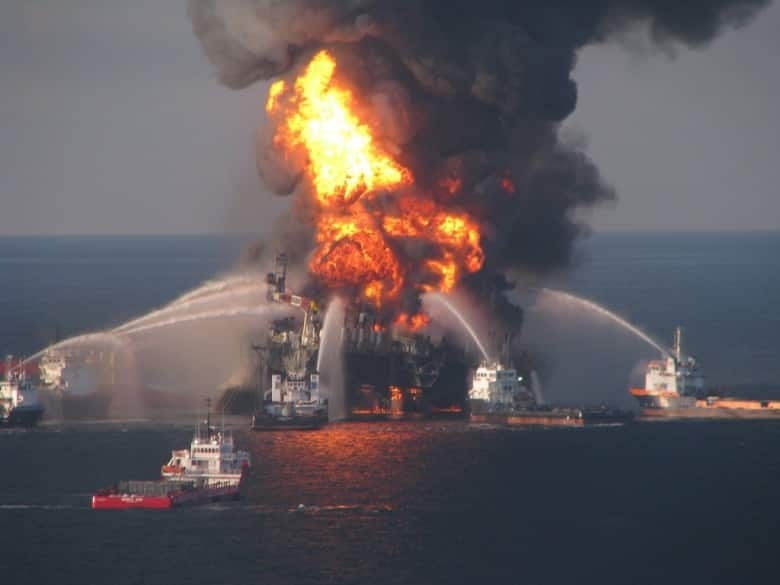 « Everyone saw the catastrophic effects it was having on the environment and the monetary burden it also created for the company and the whole local economy there. So, lots of researchers thought, there’s got to be a better way to deal with this than what’s out there. Lots of folks started working on this idea of asorbents. »

Typically, oil spill cleanup involves skimming and burning the crude off the water’s surface, or breaking it down with chemical dispersants. 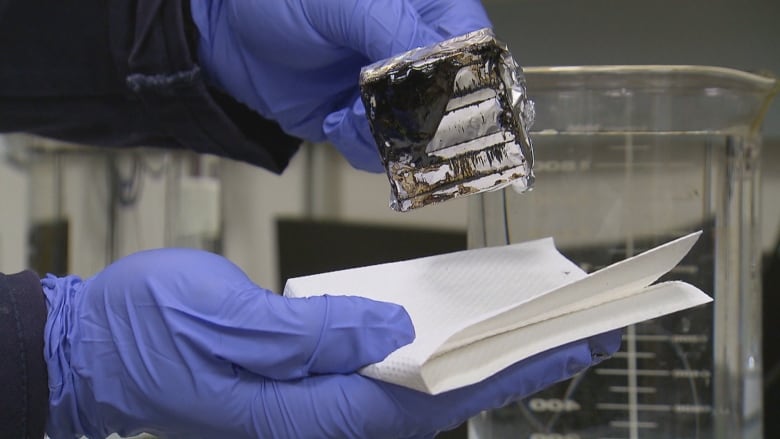 The powdered boron nitride developed at the University of Calgary, when added to oil, allows the oil to be drawn out of the water with a foil-wrapped magnet. (Dave Rae/CBC)

The oil recovery rate, though, is far from perfect, says a science historian at the University of King’s College in Halifax.

« Nobody would dispute that our track record is not very good, » Ian Stewart says.

The size and location of a spill are also factors in recovery, he says. 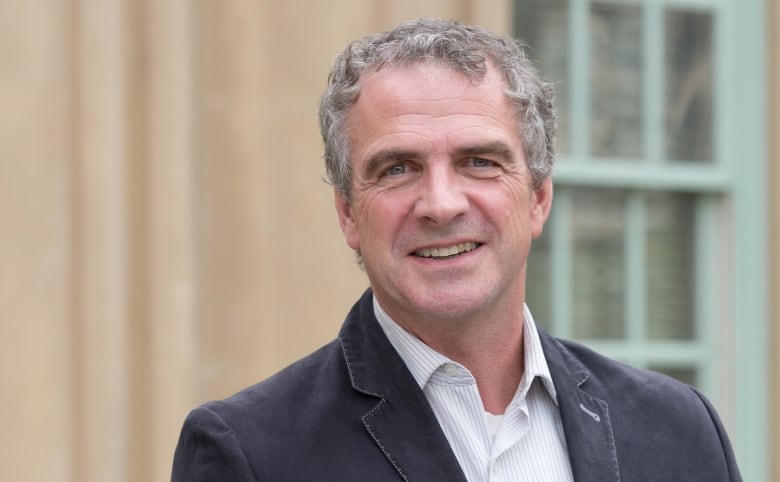 Ian Stewart, a science historian at the University of King’s College in Halifax, says the oil recovery rate after a spill is far from perfect. (Submitted by Ian Stewart)

« Five to 15 per cent is what’s said. But it really depends. If you’re in a very calm, secluded bay and you’ve got the right technologies on hand, then a lot more can be recovered. It does vary. The big spills that have happened throughout history, they have typically been in places that were very hard to recover. »

But, he cautions, real world testing of the new cleanup technologies is yet another challenge.

« It’s all promising stuff. The problem, as these researchers will tell you, is that they’re far away from being operational. »

Back at the University of Calgary, researchers recognize that a lab demonstration is one thing. The open ocean is another.

« We are always trying to look at efficient techniques to go beyond the lab and try to have more real solutions to what the industry is facing these days, » Nassar says.

The next step is testing the « super sponge » on a larger scale, he says. 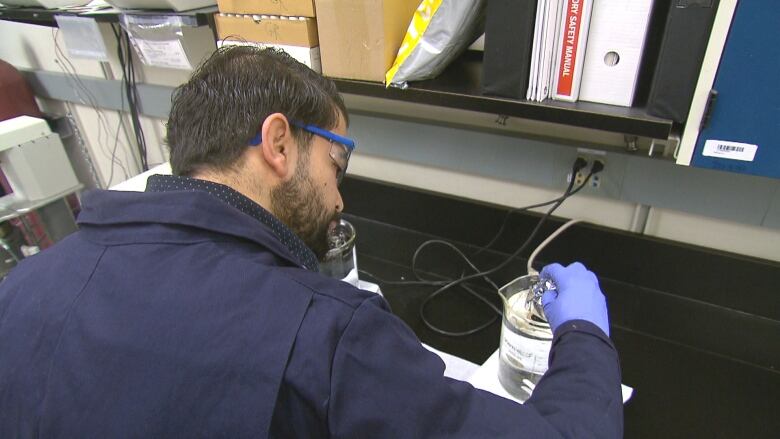 Engineers at the University of Calgary hope to expand the research to larger projects. (Dave Rae/CBC)