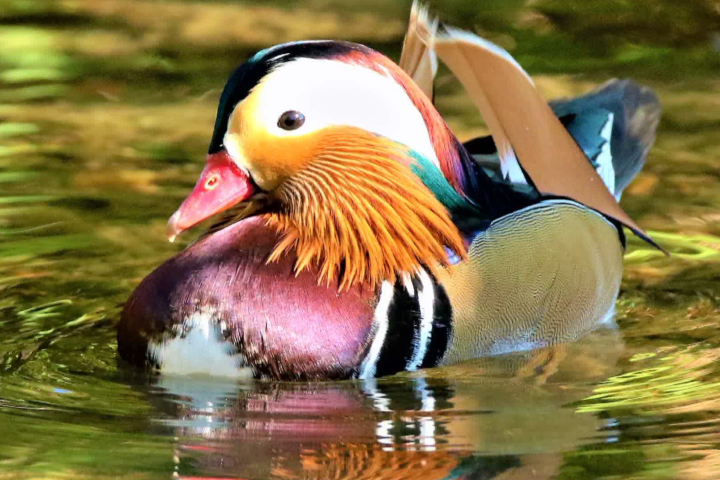 Whether they have four legs, two wings or a tail, animals have a way of nosing their way into the news.

In fact, many animal stories were among Global BC’s most read in 2018, while others dominated talk around water coolers and dinner tables.

Here’s a look at some of the animal stories that roared into the headlines this year.

For nearly two weeks in November, Metro Vancouver was captivated by #Otterwatch2018.

The episode began when a hungry — and illusive — river otter slipped into Vancouver’s Dr. Sun Yat-Sen Classical Chinese Garden and took up residence in the park’s pond.

From there, it began gobbling its way through the gardens’ prized — and valuable — koi fish.

The Vancouver Park Board brought in an expert to try and catch the critter, but the wily animal evaded capture — munching all but three of the gardens’ 14 koi, including a 50-year-old fish named Madonna, before slipping away on its own.

The episode resonated with the city, dividing the public into #TeamOtter and #TeamKoi on social media, spawning Chinatown Otter merch and spurring a parody Twitter account.

WATCH: B.C. has its own spectacular visiting Mandarin duck

Speaking of celebrity animals, few in B.C. got as much attention this year as the Mandarin duck.

The bright, exquisitely plumed birds are native to East Asia and not known to exist in the wild in North America so it’s something of a mystery how this one ended up in Burnaby Lake and Lost Lagoon.

However it got there, the duck had B.C. birders a-twitter in November, with crowds flocking to the lake to try and snap a photo of the creature.

The Burnaby Lake Park Association says the bird has actually been there since last May, and others have suggested it’s been around for a full 18 months.

The duck’s celebrity came on the heels of another Mandarin duck, this one in New York’s Central Park, going viral.

WATCH: Meet the Delta cat that is living a life of crime

When the news writes about cat burglars, it’s very rare that the burglar in question is a real cat.

Not so in the case of Bella, a North Delta cat that’s dedicated herself to a life of crime.

The purr-loining puss has developed a reputation for sneaking out of owner Shawn Bell’s apartment every night, prowling the neighbourhood and returning with laundry for loot.

That’s left Bell with bags and bags of the stolen stuff — but no one to return it to. He said in September that no one has come looking for their laundry yet.

WATCH: Was that a small shark spotted off of Vancouver’s Kits Beach?

Experts believe the creature, whose fin was photographed cresting the waves close to shore at Kits Beach, was a Pacific spiny dogfish.

The species of small shark is not uncommon in the deeper waters of the Georgia Strait.


READ MORE:
Is that a shark swimming up to Vancouver’s Kits Beach? Possibly yes, and it could be in trouble

What’s unusual is for one of those creatures to come in so close to shore.

The Vancouver Aquarium suggested the animal may have been hunting or in distress.

For a week in November, the internet went steer-crazy. Giant cows from around the globe were suddenly making headlines, after the story of Knickers the Australian cow, who was too big to be butchered, went viral.

And B.C. was no exception, adding Buddy the steer to the pantheon of giant bovines.

The massive animal is six-foot-five and weighs about 2,400 pounds.

His owner, Jim Saiko, bought Buddy six years ago as a calf with the intention of butchering him — but instead the pair bonded and became literal buddies.


READ MORE:
No bull: B.C. home to one massive steer

Buddy is so big, in fact, that he keeps outgrowing his shelter.

However, the Buddy story may be coming to an end. Saiko told Global News he’s moving and can’t take the steer with him so whoever buys the farm may get a massive cow in the deal.

“I hope that if someone does buy my property, they’d want to keep him,” said Saiko.

It looked like the heartwarming story B.C. needed during another brutal year of wildfires.

Five “lost” 12-week-old Maremma puppies were found and “rescued” by a BC Wildfire crew on patrol near Lumby in August.

The crew had found the dogs on the side of the road, and after calling local authorities and learning there were no houses nearby, took the dogs in.

However, it turned out the dogs weren’t lost at all.

Their owner, Heidi Lang, said the dogs were actually wandering her 640-acre beef-and-sheep farm and were about half a kilometre from her residence.

The dogs were returned safely.

Bear enters 95-year-old’s pantry, she chases him out

Anna Stady was watching TV in her home in Union Bay, near Courtenay, in August when she had an experience she won’t soon forget.

The 95-year-old said she heard a noise in the kitchen — and when she investigated, found herself face-to-face with a bear.


READ MORE:
‘I chased him out’: 95-year-old Vancouver Island woman finds black bear in her pantry

The bear headed out to the woods — only to return minutes later, this time getting into the baking goods.

“It was the same bear. Only he knocked over the sugar bin, and oh, what a mess,” Stady said.

She chased the bear out once again and is rather humble about the whole story.

“It wasn’t even that exciting. I don’t know why it is getting that much excitement,” Stady said.

WATCH: Molly the pet pig adopted from the BC SPCA killed and eaten by new owners

While many of the stories on this list are cute or funny, not all of them have happy endings — including the following three.

One of the animal stories of 2018 that elicited some of the strongest response from our readers was the story of Molly the three-year-old Vietnamese potbelly pig.

Her story drew outrage when it emerged that she had been adopted from the BC SPCA last January, only to be killed and eaten by her new owners about a month later.

What’s more, Molly’s new owners allegedly Snapchatted photos and videos of the meat being seasoned and prepared to eat.

The BC SPCA, while upset, said the owners were within their legal rights to kill the pig so long as it was done humanely.

The owner later posted to Facebook to apologize and said he arrived at the decision to kill the pig after it became aggressive with his dogs and tried breaking through a door.

“I do promise that Molly died humanely, and it was not done for fun or for sport,” he wrote.

“I realize that what I did was wrong and I cannot fix it. I can only continue to apologize.”

WATCH: Orca lets go of dead calf after carrying it for 17 days

The fate of B.C.’s endangered southern resident orcas was an ongoing story throughout 2018, animated heartbreakingly by the sad fate of two members of the J-pod.

The orca known as J-35 made international headlines when her calf died shortly after birth.

Rather than letting it go, she took it on an epic journey, keeping the dead calf afloat and pushing it through the water for more than two weeks and 1,500 kilometres.

A second J-pod orca, J-50, also became the focus of international attention after she stopped eating and became severely emaciated.

A joint effort by Canadian and U.S. scientists to try and diagnose her problem, give her antibiotics and revive the three-year-old female lasted for months, but to no avail.

J-50 was last sighted in mid-September, and after days of fruitless searching, government officials and NGOs concluded she must have died.

The loss of J-50, a breeding-age female, left the southern resident population at just 74 animals and highlighted the plight of the struggling group.

Concern over their future became a key element of a Federal Court of Appeal decision to send the Trans Mountain Pipeline back to regulators to consider its effect on the marine environment.

It also prompted new whale watching regulations in B.C., while in Washington state, Gov. Jay Inslee instituted a partial ban on the practice and dedicated $1 billion in funding to preserve orcas and the wild salmon they feed on.

The most tragic of this year’s animal stories was the death of a Yukon mother and her infant daughter in an attack by a grizzly bear in November.

Valé​rie Thé​orêt and her 10-month-old daughter Adele Roesholt were mauled to death on Nov. 26 outside their remote trapping cabin northeast of Mayo, Yukon.

The child’s father, Gjermund Roesholt, made the horrifying discovery upon returning to the cabin — after himself being charged by the bear, which he fatally shot.


READ MORE:
‘They were living the dream’: Community reels after Yukon mom and baby killed by grizzly bear

The death sent shockwaves through the community, which described the family as “living the dream” before the tragedy.

The incident put a spotlight on the region and its lifestyle but prompted a reaction from locals who said such attacks are extremely rare and that living in “the bush” is safer than the city in its own way.

Results of a necropsy on the bear have yet to be made public.