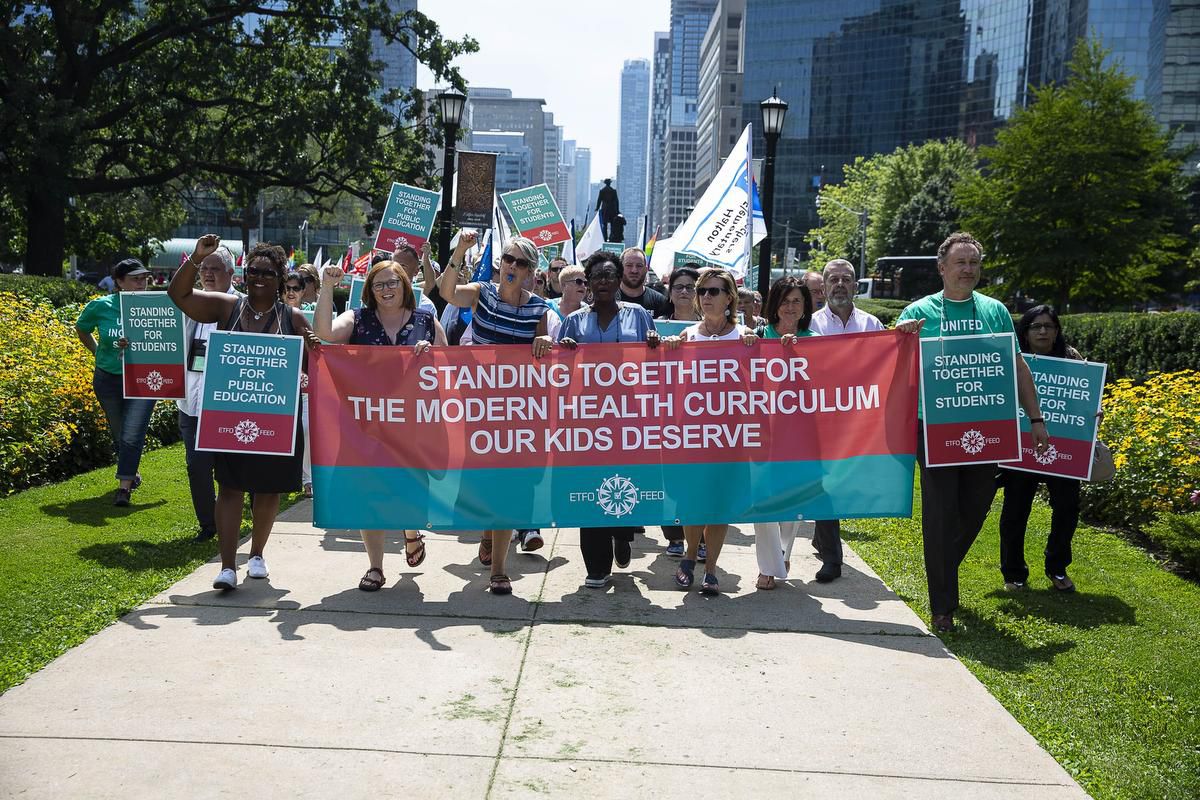 Ontario’s elementary teachers are legally challenging the rollback of the modernized sex-ed curriculum because it has caused a “chilling effect” among educators and put students at risk of harm, a court heard Wednesday.

Lawyers for the Elementary Teachers’ Federation of Ontario (ETFO), a union representing 83,000 educators, say the repeal of the 2015 Health and Physical Education (HPE) curriculum, and the creation of a website for parents to report non-compliant teachers, was unconstitutional.

“This case is not about the curriculum, it’s about the directive and the reporting site,” said ETFO lawyer Adriel Weaver in Divisional Court. She said there’s been a “chill” among teachers making them afraid to teach the 2015 curriculum, which ultimately deprives students of information, putting them at risk.

ETFO lawyers say the directive by the Progressive Conservative government violates the rights of teachers by limiting their freedom of expression, and the rights of students.

The two-day hearing is tackling two separate legal challenges to the province’s rollback of the 2015 curriculum, which included such topics as same-sex relationships, consent and gender identity. The other application was made by the Canadian Civil Liberties Association (CCLA). Both groups want the government directive quashed, but the province, which will make its arguments Thursday, says the applications should be dismissed.

In August, Premier Doug Ford scrapped the 2015 HPE curriculum for elementary grades because some social conservatives felt it wasn’t age appropriate. It was replaced with a curriculum issued in 2010, which contains sex-ed material from 1998. At the time, he warned teachers who did not comply would face repercussions, saying: “Make no mistake, if we find somebody failing to do their job, we will act.” His government also launched a website called ForTheParents.ca, which some critics likened to a snitch line.

ETFO says the reporting website, which is no longer active, had the effect of intimidating teachers, constraining their professional judgment, and ensuring students don’t learn the 2015 curriculum.

The panel of three judges asked the ETFO lawyers if any teachers had been disciplined or if they had any data, or teacher surveys, indicating a chill effect. But they did not.

Prior to proceedings, Cindy Gangaram, a co-applicant in the ETFO challenge, told reporters she has experienced a chill effect, saying the directive “coerces me as a teacher to not teach important topics that had been included in the repealed 2015 curriculum.”

Lawyers representing the CCLA and co-applicant Becky McFarlane, who’s a queer parent of a sixth grader, focused their arguments on the curriculum change. They say the interim curriculum doesn’t include sexual orientation, gender identity and same-sex relationships, which alienates the LGBTQ+ community and violates their constitutional right to equality.

Stuart Svonkin, who represents the CCLA and McFarlane, said the directive is discriminatory against those who are LGBTQ+ because they have been “erased” from the curriculum. When the judges asked if there had been an infringement of rights during all those years when that sex-ed material was taught, from 1998 to 2014, Svonkin replied, “The world has changed … The Human Rights Code has changed.”

His comments were echoed, in part, outside the courthouse by Michael Bryant, executive director of the CCLA.

“The official curriculum in Ontario has been changed — it used to be diverse and now it’s heterosexual only,” he told reporters. “Obviously, this is about homophobia. If the government is going to be homophobic with its curriculum, you can bet the Constitution will have something to say about that.”

According to court documents filed by the province, sexual health topics in school are not matters of constitutional law. Furthermore, their lawyers argue that teachers have a great deal of discretion when it comes to lesson plans and have a duty to teach in a way that’s inclusive of all students, including LGBTQ+.

Outside court, ETFO president Sam Hammond told reporters the province is being hypocritical, by saying teachers have discretion when the government issued a warning to them and created a “snitch line to solicit complaints.”

“Thousands of frustrated Ontarians have called for the reinstatement of the (2015 curriculum), he said. “We have collected thousands of petition signatures calling for the sexual health component of the 2015 curriculum to be restored.”

The province recently wrapped up a public consultation on education issues, which will inform its creation of the next HPE curriculum to be issued for the next academic year. Between September and December, it received 72,000 submissions through web surveys, online comments, and telephone town halls.

At Queen’s Park, Progressive Conservative MPP Paul Calandra (Markham-Stouffville) said the government is “fairly confident” it will win the case.

Calandra noted the Tories consulted the public extensively as it prepares to revamp the health curriculum.

“I never in my wildest imagination thought that there would be 72,000 engagements in the process. It has gone very, very well,” he said Wednesday.

Meanwhile, NDP MPP Terence Kernaghan (London North Centre) said when children see themselves reflected in the curriculum, they “thrive both educationally and socially.”

“By deliberately removing LGBTQ identities and families from the curriculum, the Ford Conservatives put students at risk,” Kernaghan, the NDP’s critic for LGBTQ issues, said in a statement. “Any person, and any parent of a child who’s been a victim of cyber bullying, a survivor of sexual violence, or subjected to discrimination because of their LGBTQ identity, can tell you how devastating it is for a child’s mental and physical health to be denied information, empowerment and a safe space.”

‘It felt like a movie’: Single father of twin girls returns to Canada after surrogacy ordeal