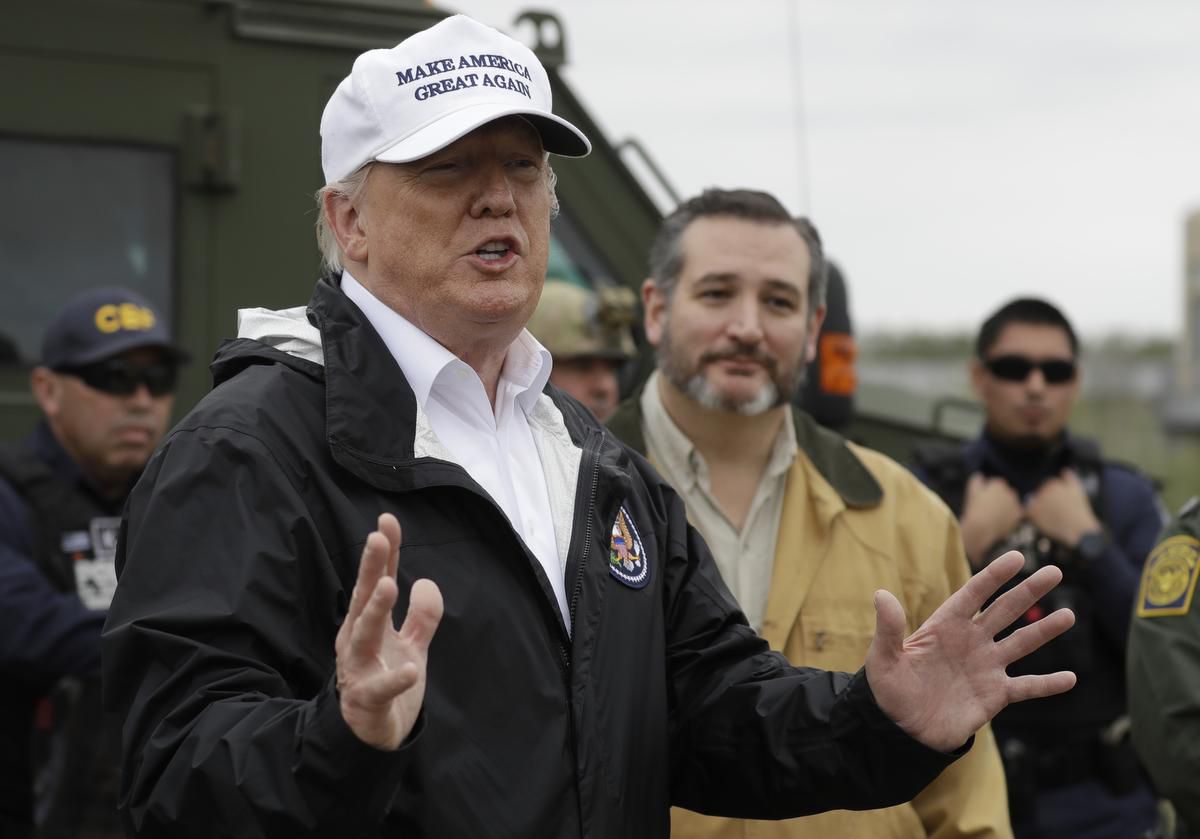 WASHINGTON—U.S. President Donald Trump lied his way through a visit to the Mexican border on Thursday, returning again and again to false claims as he attempted to promote his proposed wall project.

He unleashed the dishonesty barrage, which included at least 10 false or misleading claims, as he escalated his threat to declare a “national emergency” if he cannot convince Democrats to agree to spend $5.7 billion on the border wall.

He said he would “probably” declare an emergency, if there was no deal to end the 20-day-long government shutdown he initiated because of the wall dispute, and he added, “I would almost say definitely.”

Declaring an emergency would possibly allow Trump to build and fund a wall without Congress’s approval.

But it would be certain to be challenged in court and prompt abuse-of-power accusations, and several senior congressional Republicans have already said they would not support such a drastic measure.

NBC and The New York Times reported Thursday that the White House was looking at the idea of funding part of the wall using billions in unspent money that was allocated to the Army Corps of Engineers budget. NBC and the Times said the funding pool includes money intended for projects in areas hit by natural disasters, including Puerto Rico and California.

Trump has previously threatened to deny federal assistance to hurricane-damaged Puerto Rico and to fire-damaged California, whose officials have criticized him.

The shutdown will be the longest in U.S. history if it continues until Saturday, as appears likely.

Pressure has mounted on Trump as it has dragged on.

Hundreds of thousands of federal workers are scheduled to miss their first paychecks on Friday. The organization representing FBI agents issued a Thursday letter demanding an end to the shutdown, arguing that “financial security is a matter of national security.”

Trump’s Thursday dishonesty began even before he left Washington. He told reporters that, when he had promised during his campaign that Mexico would pay for the wall, he had never said this would be a direct payment.

“Obviously, I never said this, and I never meant, ‘they’re going to write out a cheque,’ ” he said, adding: “When I said ‘Mexico will pay for the wall,’ in front of thousands and thousands of people, obviously they’re not going to write a cheque. They are paying for the wall indirectly.”

He had not promised a “cheque” during the campaign, although he explicitly said “they may even write us a cheque,” but he had, in fact, made clear he was talking about a direct payment; a document still on his campaign website promised he would threaten Mexico with financial harm until it made an “easy” decision: “make a one-time payment of $5-10 billion.”

Trump claimed that the indirect payment he is now talking about would effectively be made by Mexico through the new North American trade agreement he has negotiated with Canada and Mexico.

But even if the agreement is eventually approved — Congress might take years before voting on it — it will never create a funding stream that can be allocated to an infrastructure project.

When he arrived in McAllen, Texas for an immigration roundtable at a Border Patrol station, Trump derided critics who dismiss walls as outdated and ineffective.

He said some old technology, such as the wheel, is timeless.

“A wheel is older than a wall,” he said.

He repeated it a few seconds later: “The wheel is older than the wall.

Defensive walls predate wheels by thousands of years. (Jericho’s famous wall existed around 8,000 BC; the wheel is thought to have been invented around 3,500 BC.)

Seeking to portray Democrats as divided on the shutdown, Trump described a “big article” in which he said newly elected Democrats broke with party leadership and described the party’s “no wall” position as “indefensible.”

That did not happen.

An article in Politico merely included two Democrats expressing mild concern about how voters would respond to the extended shutdown.

Both of them continue to oppose the wall.

While George W. Bush approved 700 miles of border fencing in 2006 — not the kind of giant concrete wall Trump campaigned on. Democrat Bill Clinton was president 20 years ago, and he made no effort to build a wall. Nor did Republican predecessors George H.W. Bush and Ronald Reagan; indeed, Reagan explicitly opposed the idea.

As he did in his Tuesday prime-time address, Trump offered a misleading description of Democrats’ position on the wall: This time, he said, “They said, ‘We don’t want a concrete wall.’ I said, ‘That’s OK, we’ll call it a steel barrier.’ ”

Democrats have objected to the project on the whole, not to Trump’s choice of material.

Trump left the Border Patrol station and went to the border, itself, at the Rio Grande. There, he told reporters, “The nice part about the wall or the barrier is I can have that worked out in 15 minutes. We can start construction.”

The construction process, which involves planning, study, contracting, and contentious property acquisition, would not begin nearly that fast.

Trying to exaggerate the problem of illegal immigration, Trump said of the Border Patrol: “They have done a fantastic job. Never so many apprehensions, ever, in our history.”