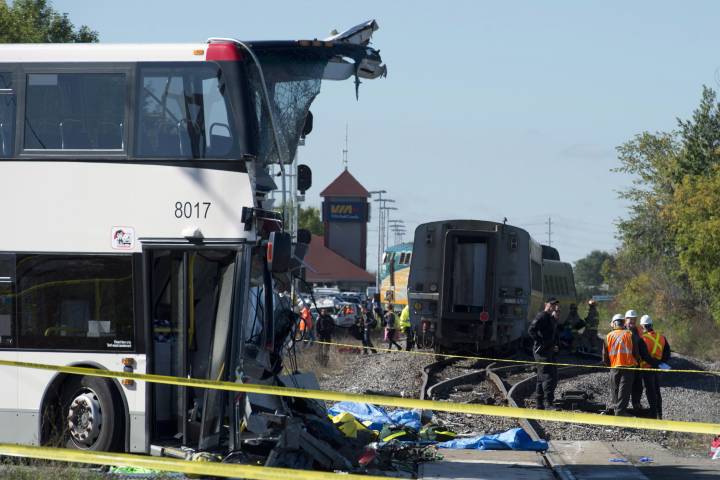 The incident happened just over five years after another deadly accident involving a double-decker bus, which took place in the Ottawa suburb of Barrhaven.

The bus was heading to downtown Ottawa on the Transitway, a private roadway that’s been set aside for commuter buses, said a report by the Transportation Safety Board (TSB).

Along the Transitway was a left-hand curve that led to Woodroffe Avenue, where the roadways ran parallel and a railway crossed them both.

At the bus’ wheel, the driver would have been faced with all the usual controls and a few additional pieces of technology — like a video monitor screen measuring six inches by four inches.

This monitor showed feeds from four different cameras on the bus: one showed the upper deck, and any OC Transpo driver was supposed to look at it at bus stops and while the vehicle was in service.

While the bus was stopped at Fallowfield, neither the driver nor his 95 passengers knew that flashing lights, bells and gates had activated along the railway some distance ahead to signal a train was coming.

The bus pulled out of the station 10 seconds after those signals were triggered — and four minutes behind schedule.

As the bus pulled out, one passenger was standing near the top of the double-decker’s stairs and would have been visible on the driver’s monitor screen.

No passenger was supposed to be standing on the top deck — and it was the driver’s job to look at the screen and remind them.

As the bus approached the left-hand curve on the Transitway, the driver would have heard passengers talking about seating that was available on the deck above them.

The driver looked up toward the monitor at this time.

Along the railway, Via Rail passenger train number 51 was about to cross Woodroffe Avenue and the Transitway en route to Toronto.

Warnings had been activated for more than 30 seconds.

Inside the bus, however, no one would have been able to hear the bells — and with the gates and flashing lights hidden by trees, foliage, signage and the bus’ front pillars, the driver wouldn’t have been able to see that a train was coming.

Suddenly, passengers noticed the train and yelled out at the driver to stop and look out.

The driver then hit the brakes smoothly — as he had been trained to do — and that lengthened the bus’ stopping distance.

The bus in which six people died is towed away from the site of the fatal bus and train crash in Ottawa, Thursday, September 19, 2013. Six people died in the crash between a Via Rail train and a city bus on Wednesday.

The bus hit the train after its speed had slowed to 7.7 km/h.

The collision killed the driver and five passengers, hurt nine others seriously and left 25 passengers with minor injuries. No one was hurt on the train.

The double-decker might have avoided the collision had it stopped just 0.4 metres sooner.

TSB investigators blamed the crash on a number of factors, none were driver error.

“Given the circumstances, this accident could have happened to just about any driver,” TSB lead investigator Rob Johnston said in 2015, when the board’s report was released.

Visual distraction was one factor identified in the crash.

Drivers are expected to inspect the video monitor when their buses reach stops, and when they’re in service.

Drivers, the TSB determined, would need to “periodically glance at the screen” while the bus was moving in order to monitor passengers standing on the upper deck.

“Research has determined that a driver’s glances away from the forward visual scene, especially glances lasting two seconds or longer, are significantly associated with accidents and near accidents,” the report said.

Cognitive distraction was another factor.

The driver had spoken with at least one more passenger about sitting on the bus’ upper deck before the vehicle left Fallowfield station, the report said.

And as the bus travelled, the driver would have heard passengers discuss seating.

“This combination of factors, along with the perceived need to make a no-standing-on-upper-deck announcement, created a situation where the driver was likely cognitively distracted in the seconds prior to the accident,” the report said.

The TSB recommended “comprehensive guidelines” for the use of in-vehicle video monitoring displays to lower the risk of driver distraction.

Distraction wasn’t the only factor in this crash, however.

Also blamed were the driver’s obstructed view, grade separation on the road and the bus’ “crashworthiness” — it was lacking a front bumper and its front end wasn’t designed to protect against the impact of a collision.

The Canadian Motor Vehicle Safety Standards, it turned out, had “no requirements for frontal impact, side impact, rollover, or crush protection” for buses in this category.

“Although not required by regulation, a more robust front structure and crash energy management design might have reduced the damage to the bus and prevented the loss of a protective shell for the occupants,” the report said.

Ontario Place must remain ‘family friendly’ and accessible to all, experts say. Here are their ideas