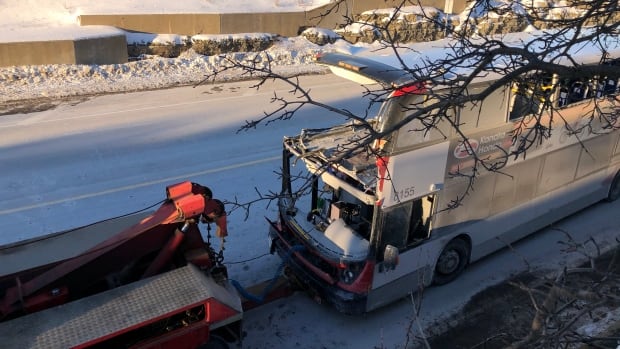 On Friday afternoon, just as rush hour was getting underway, a packed OC Transpo bus slammed into a bus shelter west of downtown Ottawa.

The next 24 hours were chaotic, as emergency crews scrambled to treat the injured and city officials tried to keep residents updated about the developments.

Here’s how it all happened.

3:50 p.m.:  A double-decker bus carrying dozens of people bound for Kanata collides with the shelter at Westboro station.

4:01 p.m.: Ottawa police announce that they’re responding to the crash and that « several » people have been hurt.

4:13 p.m.: One of the first photos of the crash shared on social media shows significant damage to the bus’s front end. Further photos would come in, showing seats dangling from the top level of the bus and stretchers waiting to ferry away injured people.

4:31 p.m.: More than 40 minutes after the crash, OC Transpo tweets that a collision has occurred and that buses are being detoured.

4:56 p.m.: Ottawa Mayor Jim Watson tweets his shock at the « horrific incident » and urges people to stay away from the crash site.

6 p.m.: The hospital says nine people are now in critical condition at its trauma centre.

6:08 p.m.: The City of Ottawa announces that it’s opened a « family reunification centre » at a nearby seniors’ centre where people can go to get information about their loved ones.

6:15 p.m.: Ottawa police Chief Charles Bordeleau updates media from the scene. He says there are « some fatalities, » but doesn’t give a number. 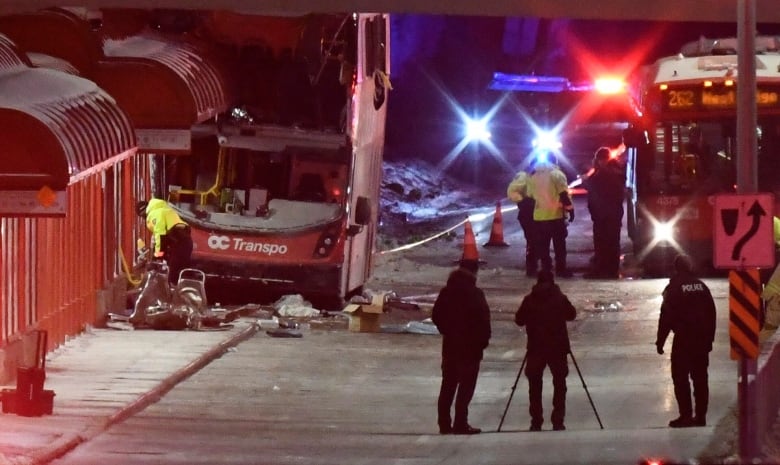 7 p.m.: Watson, Bordeleau, OC Transpo general manager John Manconi and other city officials assemble for a news conference at Ottawa City Hall. Watson says that three people are confirmed dead and that 23 others were injured. Bordeleau says the bus driver has been arrested.

8:01 p.m.: Paramedics announce they’ve finished their work at the scene.

8:25 p.m.: Premier Doug Ford issues a statement that he’s « shocked and saddened » by the crash. He applauds the work of first responders.

11:55 p.m.: CBC learns that the driver of the bus has been released from custody. 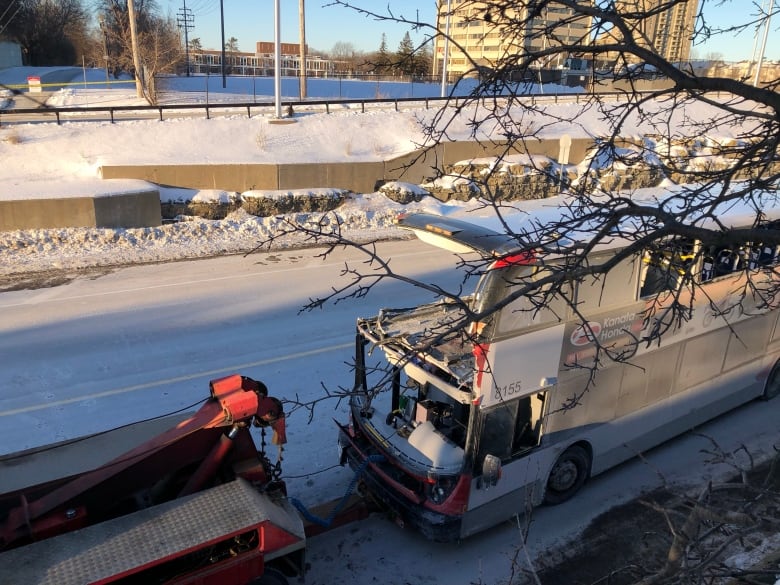 A tow truck pulls away a damaged OC Transpo bus from Westboro station on Jan. 12. The double-decker bus struck the shelter the day before. (Idil Mussa/CBC)

7:50 a.m.: Two men come by the scene and put up a tree. One man tearfully tells a CBC reporter they want to affix the names of the victims to its branches.

7:59 a.m.: Ottawa police say they’ve confirmed the identities of the three people who died, but do not release their names.

11:12 a.m.: The Ottawa Hospital tweets that it only has one person left in critical condition.

1 p.m.:  At a press conference, Sgt. Cameron Graham with the force’s collision investigation unit says officers will be reconstructing the crash to find out what happened. He urges people who were on the bus or saw what happened to come forward, and predicts the crash scene will likely be cleared by Saturday night.

3:27 p.m. Crews begin to tow the bus involved in the crash away from the station.

3:45 p.m. Nearly 24 hours after the fatal collision, police begin driving a similar bus up and down the Transitway near Westboro station in an attempt to figure out what happened.