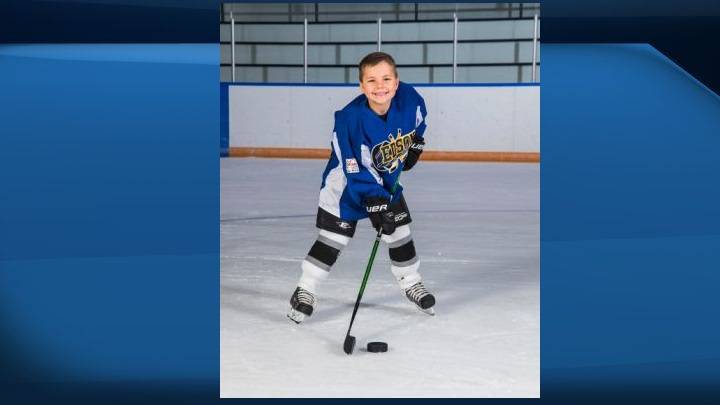 A deadly crash in central Alberta last week that killed the six-year-old son of two RCMP officers has the hockey community in Edson pulling together support for the parents.

Cooper Dwight Pennoyer died on Friday afternoon after police said a truck he was travelling in hit the back of a snowplow that was stopped on the side of Highway 16, about 30 kilometres east of Edson. The person driving the truck was taken to hospital with minor injuries. The driver of the snowplow was not hurt.

The Edson Aeros Junior A Hockey Club is now planning a pre-game tribute for Cooper ahead of their hockey game against the Cold Lake Wings this Friday night.

“We are planning a tribute to Cooper as he was a huge Aeros fan and also a player in the Edson minor hockey system,” the team’s president, Axel Axmann, said in an email to Global News. “We understand that Cooper’s mom, who is also an RCMP member, will be in attendance.”

“She was very supportive of it,” Axmann said of Sarah Pennoyer’s response to the tribute plans.

“As we learned from the tragedy in Humboldt, the hockey family is a small family and it’s a very tight-knit group,” Axmann said. “Cooper was a member of the Edson Minor Hockey Association here… We thought one of the best ways to honour him was to have a game in his memory… and show support to his family.

“Lots of tears, lots of grieving will happen and it’s OK, because it’s something that we need to do in order to deal with the process.”

Cooper’s obituary highlights his love for school, especially gym class, and “having new ‘harder’ things to learn.” It also says he played hockey with the Edson Sabres and was also a passionate fan of the sport, cheering for the NHL’s Edmonton Oilers and Vancouver Canucks. Axmann said the Aeros’ assistant coach told him Cooper also enjoyed cheering on their team at games.

“Although young in years and old in soul, Cooper’s zest for life shone everyday through his infectious smile and big brown eyes that lit up when he talked about everything he loved,” his obituary reads. “When Cooper smiled it was with his whole face and you couldn’t help but smile with him.

“He shared his passion of hockey, Lego and everything outdoors with his dad, spending countless hours talking, constructing, discussing cows and quadding.”

Cooper’s obituary also mentions he had expressed a desire to follow in the footsteps of his parents, Sarah and Jason Pennoyer, and to eventually pursue a career in law enforcement.

“He was so proud when he put on his mom’s RCMP hat or his dad’s RCMP Stetson and got to play with their vests,” the obituary reads. “The detachment ladies had their ‘coop’ entertainment almost every morning and afternoon while he was waiting to go to school or home, target practice with elastics — taping them to their chairs and drawing them pictures on whatever scrap paper they had on their desks.”

In lieu of flowers, Cooper’s family has set up a trust fund for his sister Taylor to which people can donate. Axmann said he hopes people attending Friday’s game will donate to the trust fund.

“A portion of the funds will be donated in his name to Ecole Westhaven School and the Edson Minor Hockey Association.”

There will also be a celebration of Cooper’s life in Edson on Thursday.

“The RCMP members are a big part of our community and they’re very much involved with us and they do great things for us,” Axmann said. “To have this happen is tragic and it’s sad and we all feel for them and the family.

“It’s a small community and they’re such a big part of it.”

The RCMP said the cause of Friday’s crash remains under investigation.

Edson is located about 200 kilometres west of Edmonton.

Did Saudi teen Rahaf Mohammed jump the queue with her speedy resettlement to Canada?