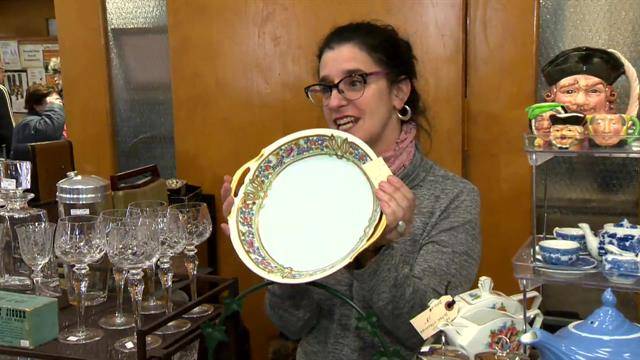 There’s also the smell of an old radio. “It smells like an old car,” she said while taking the smell in. “It’s funny: it’s the sounds, the smells, the touch, the feel.

With her overflowing treasure trove of vintage china and home items, Ouimet’s appreciation for the classic is clear.

“I have one room in particular that I keep the door closed, because it’s full of stuff,” Ouimet admitted, “and I’m renting out a friend’s basement to put my stuff there.”

It’s a happy problem she shares with a handful of vendors at Timely Vintage, a vintage market in Pierrefonds, where collectors go to sell their own overstock.

“I have to buy the whole collection, so I get rid of what I don’t want after, but some of this I still want — but my wife doesn’t want me to have it,” Lance Ford, owner of the Vintage Vibes shop, said amid laughter.

WATCH: Julie-Anne Ouimet from Timely Vintage shows off her most precious finds

The market, set inside the St Michael and All Angel’s Church, is a place for unique finds, ranging from the cute to the admittedly strange.

On the cute list is a walking Mickey Mouse doll. “This is one of my favourites,” Ford said while showing off the doll. “Oh, it’s so cute.”

On the strange column, meanwhile: a weirdly-shaped, multi-coloured vase.

“This thing, they call it ‘goofus glass,’ because back in the days, they took it as a goof,” said Correy Patterson. “Like people thought they were joking when they made these, but now they’re getting desirable because they were weird.

The whole place is a time capsule of sorts. “I’m showing them some of the stuff that I grew up with,” said Evan Graham, who took his children to the market.

And if you ask, you’ll also get a history lesson. “These are pins from the ’40s, during the war period,” Mike Hennessy explained.

“Copper was unavailable, they were using it to make shells. So they coloured the silver a copper colour, because they couldn’t get the brass.”

The market was a one-day pop-up.