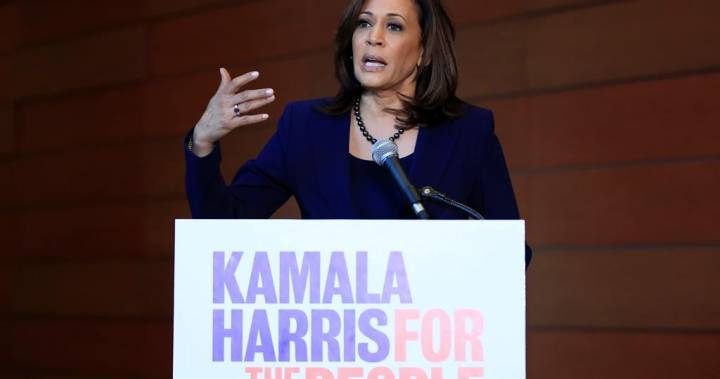 A suburban Montreal high school is leading the cheers north of the border for graduate Kamala Harris, the California senator and former prosecutor who confirmed Monday she’s seeking to become the first black woman elected president of the United States.

“Run Kamala Run!!” Westmount High School’s social-media feeds gushed after Harris confirmed what much of the rest of the U.S. had assumed: she plans on being the Democrat who pries President Donald Trump out of the White House in 2020.

In a memoir Harris describes the heartache of moving from Oakland to chilly Montreal so her mother Shyamala Gopalan, a breast-cancer researcher, could take a job at McGill University.

“The thought of moving away from sunny California in February, in the middle of the school year, to a French-speaking foreign city covered in 12 feet of snow was distressing, to say the least,” she writes in The Truth We Hold: an American Journey released earlier this month.

Her initial foray into Notre-Dame-des-Neiges, a school for native French-speakers, was a challenge: “I used to joke that I felt like a duck, because all day long at our new school I’d be saying, ‘Quoi? Quoi? Quoi?’”

‘I know how to fight’: Kamala Harris explains why she will win in 2020

By the time she was enrolled at Westmount, Harris had mostly adjusted to her life in Quebec, recalling fondly how her by-then divorced parents both attended her graduation, her mother resplendent in a bright red dress and heels.

“I think she’s a role model for all of us. Coming from a great school like Westmount, possibly to the White House, is a great story to tell.”

Westmount High School couldn’t be more proud to claim presidential hopeful Senator Kamala Harris among its former graduates. Kamala embodies so much of what we strive to impart in our students. Run Kamala Run 🏃🏽‍♀️!! https://t.co/zSo4gGRycA

It’s no accident that Harris, whose mother is from India and father from Jamaica, chose Martin Luther King Jr. Day to confirm her plans, which she did during an appearance on ABC’s “Good Morning America.

“My parents were very active in the civil-rights movement, and that’s the language that I grew up hearing,” she said.

“(King) was aspirational like our country is aspirational. We know that we’ve not yet reached those ideals. But our strength is that we fight to reach those ideals … We are a country that, yes, we are flawed, we are not perfect, but we are a great country when we think about the principles upon which we are founded.”

Harris was far from the only Democratic hopeful, declared or otherwise, who was out and about on what would have been the civil-rights leader’s 90th birthday — evidence that thorny issues of race, gender and ethnic tensions will be prominent in the coming primary battles among an already dense and growing field of candidates.

Vermont Sen. Bernie Sanders, the 2016 challenger to eventual Democratic nominee Hillary Clinton, attended a church service and a rally Monday in South Carolina, where he fell short two years ago and will need support from black voters to contend again.

“It gives me no pleasure to tell you that we now have a president of the United States who is a racist,” Sanders told rallygoers.

Gillibrand said “white women like me” must share the burden of fighting for equality. Warren offered a constitutional amendment to guarantee the right to vote. And Biden, who lingered on his close relationship with former boss Barack Obama, lamented his support for a crime bill in 1994 that imposed harsher sentences for crack-cocaine possession.

WATCH: Presidential hopeful Kirsten Gillibrand tells crowd ‘I will fight for your children’

Harris, too, faces tough questions on issues of justice.

As a California district attorney and later as the state’s attorney general, Harris frequently opposed or ignored criminal justice reform measures aimed at levelling a playing field critics say is unfairly tilted against black defendants, the former director of the Loyola Law School Project for the Innocent wrote last week in the New York Times.

During a question-and-answer session at Howard University in Washington, Harris acknowledged having regrets about some decisions during her tenure. But her office also introduced a number of initiatives to address racial profiling and bias in law enforcement, as well as sentencing reforms, she said.

“Instead of deciding either you’re soft on crime or tough on crime, let’s understand that if we’re going to be smart with the taxpayer’s dollars, let’s get people out of the system instead of cycling through the revolving door of jail,” she said. “One of my biggest regrets is that I’ve not had more time to do more, but it’s my intention to keep fighting for it.”