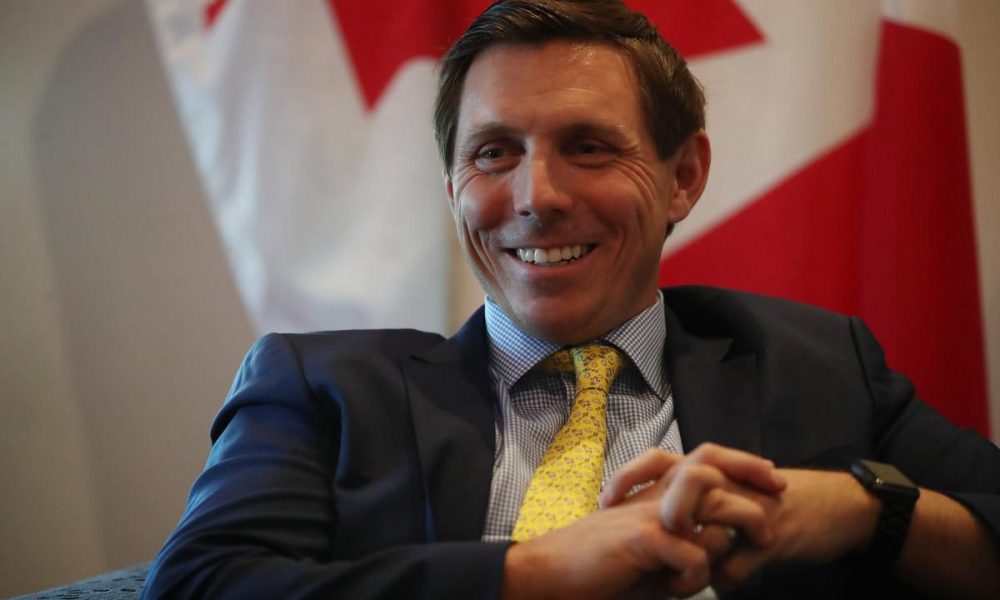 This time last year he was Ontario’s next premier.

Today, Patrick Brown is the mayor of Brampton.

It was Jan. 24, 2018, when CTV News broadcast an investigative story alleging Brown, then the Progressive Conservative leader and front-runner to succeed Liberal premier Kathleen Wynne, was sexually inappropriate with two women.

While he denied the claims, most of his top aides resigned en masse that night, emboldening Tory MPPs to force him out as leader and paving the way for Doug Ford to win the premiership.

“I would say 2018 started very challenging and I wouldn’t wish it on my worst enemy…because that doesn’t just hurt you, it hurts your family, it hurts your friends,” Brown told the Star in a wide-ranging interview this week in his spacious top-floor office in Brampton city hall.

Brown is suing CTV for $8 million and expects the case could take “up to four or five years” to resolve. A spokesman for the network said “CTV News continues to stand by its reporting” and would not comment further on the court proceedings.

Despite penning a searing autobiography, Takedown: The Attempted Political Assassination of Patrick Brown, that was critical of many Conservatives, he insists he is not bitter.

“When I look back at 2018 it’s with fondness,” he insisted, pointing to his September marriage to girlfriend Genevieve Gualtieri and his improbable Oct. 22 victory over incumbent Linda Jeffrey in the Brampton mayoral race.

“In hockey, you get bodychecked, you get knocked down, you get back up. I got hit pretty hard — I got levelled like a truck with those allegations — but in adversity it’s an opportunity to show what you’re made of, too.”

His book has stoked controversy with Tory MPP Vic Fedeli threatening legal action over passages that allege the now-finance minister was accused of inappropriate behaviour by a female staffer. Fedeli has denied any wrongdoing.

Brown said writing the book was cathartic. “I think it’s been a big success. The publisher tells me we’ve now sold over 7,000 books and they’re going to have to do a reprint,” said Brown.

The memoir also allowed him to settle scores with the four top aides — his chief of staff, campaign manager, advertising guru, and press secretary — who quit that fateful night one year ago.

Brown appears more sanguine than he was when he was writing his book, claiming he no longer gives much thought to them.

“Obviously, mercenaries are mercenaries. People hired for the purpose of an election are only invested in themselves. The lesson there is loyalty and real friendship in public service is important,” he said.

But there were other Brown controversies beyond the CTV story. Last April, Ontario’s integrity commissioner reprimanded him for “deliberately” failing to disclose rental income and a $375,000 loan on his Lake Simcoe home.

The former PC leader plays that down as an example of “the hornets’ nest of Queen’s Park” in spite of being censured by Wake.

Still, he acknowledged there remains a schism with some in the party he had led since 2015.

Brown stressed he was “happy” last June 7 that so many of the Tory candidates he personally recruited were elected — including six members of Ford’s cabinet.

Any elation has been tempered, however, by the more right-wing direction adopted by the premier on issues as disparate as sex education and climate change.

“I would have loved if we’d had a moderate, pragmatic Progressive Conservative government, one that Bill Davis could have been proud of,” he said, referring to his mentor and fellow Brampton resident, who was Ontario’s centrist Tory premier from 1971 until 1985.

“I look at the debates that we’re having between provinces on climate change and I think it would have been very different. Climate change is an issue that shouldn’t be partisan,” he said, conceding the new Tory leadership effectively “changed the entire conversation for the country” on carbon pricing.

Similarly, Brown had publicly broken with the social conservatives who helped him with the 2015 Tory leadership and embraced the modernized sex-education curriculum introduced by Wynne’s Liberals.

But Ford, who needed those same groups to win last March’s PC contest, has so far stuck with them, scrapping the updated sex-ed lessons and temporarily reverting to the previous 1998 curriculum while revising the syllabus.

“Just think how different the flavour of the government would be,” said Brown, adding he had hoped to march in last summer’s Pride parade as premier of Ontario, an event Ford skipped.

“To have no Conservative leader there? We’d made so much progress on that front. Was I sad that that progress had taken a step back? Of course,” he said.

His fractious relations with the premier remain an issue.

Ford, who didn’t want his predecessor as a PC candidate in Barrie in the last campaign, unilaterally cancelled the regional chair election in Peel — along with those in York, Niagara, and Muskoka — after Brown was vying for the post.

Some of the premier’s operatives then helped Jeffrey, a former Liberal cabinet minister, in her unsuccessful re-election bid.

Less than 24 hours after Brown defeated her, the province cancelled a planned satellite Ryerson University/Sheridan College campus for Brampton, along with expanded post-secondary facilities in Milton and Markham.

Now, the province now looking at sweeping reforms to regional government that could have an impact on Brampton as well as other municipalities.

Brown emphasizes the differences with his Tory successor are ideological and not personal.

“Obviously there are different styles of conservatism. There is the Trump style and there is the Bill Davis style and obviously I am more of a red Tory, a moderate conservative,” he said.

That said, the rookie Brampton mayor said he is “willing to work with anyone.”

“It’s not my mentality to look backward, I like to look forward and I’ve got an opportunity to do something special in Brampton and I want to honour the confidence that the people in Brampton have shown in me.”