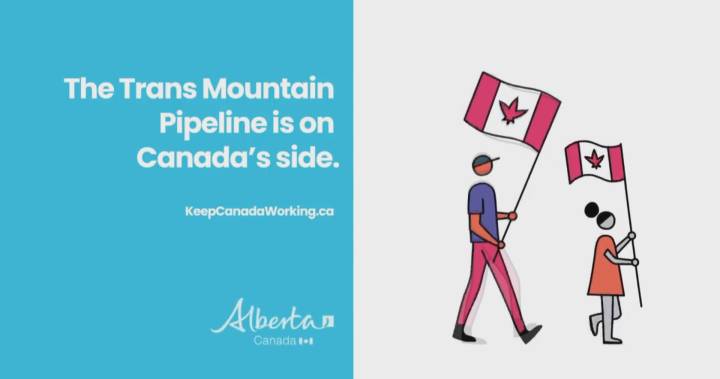 The Alberta government is full steam ahead on an advertising campaign trying to convince Canadians that the Trans Mountain Pipeline is a must-build project.

Work began on the Keep Canada Working campaign back in January, and as recently as November, the government said it had spent $10 million on the project.

But on Jan. 23, the province told Global News that $23.4 million was spent on the campaign, a jump of $13 million in just over two months.

“It does have the characteristics of an aggressive marketing campaign, given the amount of money that’s been spent,” said Mohammed El Hazzouri, an associate professor of marketing at Mount Royal University.

The total budget for the Keep Canada Working campaign is $31 million.

The money is going towards television, radio, print, online and billboard ads that tout the Trans Mountain Pipeline as a project that would boost Canada’s economy and create jobs.

According to documents obtained by Global News, Keep Canada Working is a national advertising campaign with multiple messaging arms for different parts of the country.

Although the ads are running across the country, there are specific messages targeting Halifax, parts of British Columbia, Toronto and Ottawa — predominantly to get the attention of sitting members of Parliament.

The documents also show there is a $425,000 “ethnic” campaign with TV, print and radio ads in Spanish, Cantonese, Mandarin, Punjabi and Filipino to target residents in B.C.’s lower mainland.

According to internal memos obtained through a freedom of information request, one of the main principles of the campaign is to point the finger at B.C.

“This is not B.C. vs. Alberta, this is B.C. vs. Canada,” the principles section read.

Two more principles listed in the documents said “it’s senseless to pit the environment against the economy” and “this is a good thing.”

A spokesperson for the province later told Global News that the section regarding B.C. refers to that provincial government’s position being in contrast with popular opinion and federal policy.

“Our position is very clear that communications always reference positions of the B.C. government, not the people of B.C.,” said Shannon Greer, a spokesperson for the Alberta government, in an email.

Global News reached out to B.C.’s environment minister for a comment about the campaign. The ministry responded with a statement that did not mention the Keep Canada Working campaign.

“The province’s focus remains on defending the interests of British Columbians and protecting its environment, economy and the coast,” the statement read.

“The province recommends against the approval of the Trans Mountain Pipeline Expansion Project.”

But despite the opposition from B.C., Mount Royal University political science professor Duane Bratt believes the campaign is working.

Bratt points to data from a recent poll that shows public opinion of pipeline construction is shifting countrywide.

Meanwhile, the National Energy Board is holding public consultations into the reconsideration of the Trans Mountain project, with a report expected to be issued by Feb. 22.