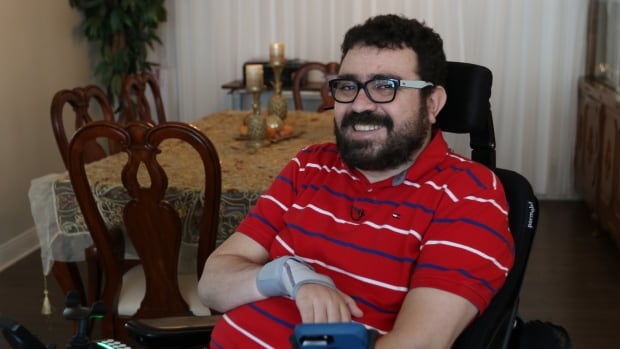 Aymen Derbali swivels his wheelchair toward the large windows of his new living room, sparsely furnished with ornate rugs.

He bows his head and closes his eyes, taking a moment for his afternoon prayer, before talking about the turning point in his life — moving into a new home with his family last August, after being apart for nearly 18 months.

« I was able to go back to my home and have a normal life, like before the tragedy, » he said.

Derbali, a father of three, nearly avoided the attack that killed six people and seriously wounded him and four others at Quebec City’s Islamic Cultural Centre on Jan. 29, 2017.

He was debating whether to go his local mosque that evening, but eventually told his wife he was going, and would be home in time to put their eldest son to bed.

Derbali was in his usual corner at the back of the room, when he saw the gunman come in and raise his weapon toward him.

He was hit with seven bullets, including one that struck his spinal cord. In a second, the life he’d set out for himself and his family made an abrupt turn. 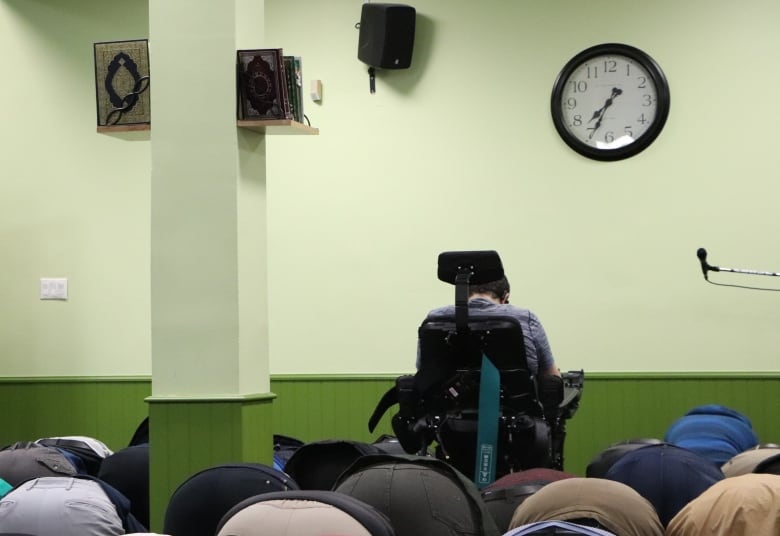 Derbali regularly attends the mosque where he was shot on Jan. 29, 2017. (Julia Page/CBC)

Derbali was in a coma for the next two months. His doctors feared he’d lost most of his cerebral capacities, after surviving four heart attacks.

When he woke up, he was told he’d never walk again.

But « being able to recognize my children and my wife, for the rest of my life, that was the main thing for me, » he said.

His coma was especially hard on his then-eight-year-old son, Ayoub, who was convinced his father was dead.

« He was very upset. So when he saw me back at my home he was very, very happy. » 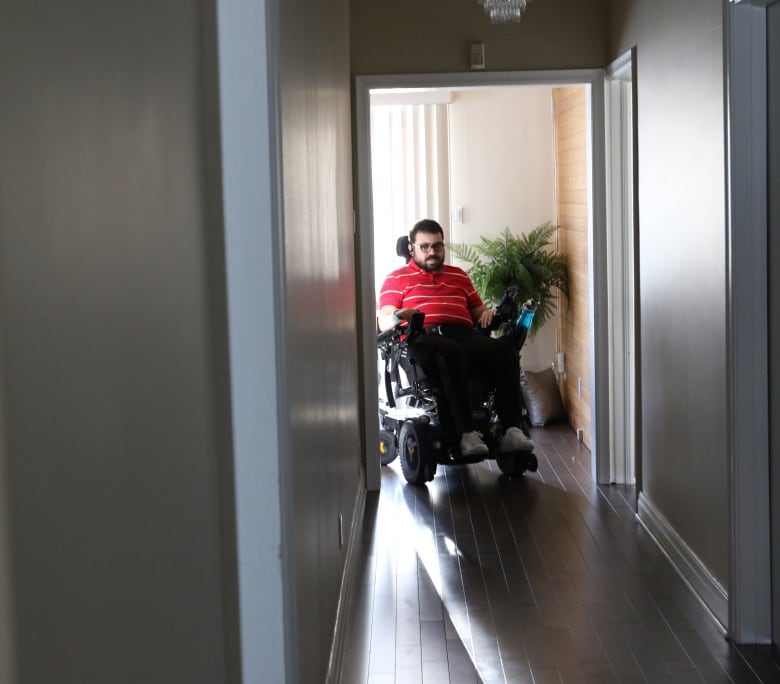 The wide hallways of his new home allow Derbali to move around easily. (Julia Page/CBC)

The soft-spoken 42-year-old can now move freely around the house, purchased thanks to a $400,000 fundraising campaign.

People from around the world answered the call from Dawanet, a Muslim charity, to help his family move out of their Sainte-Foy apartment — which was too cramped and ill-equipped for Derbali’s needs.

The wide hallways and door frames in the new home allow him to move around during the day, from his small desk in his bedroom to the sitting room where he can watch television with his children.

He can also watch them play soccer in the backyard in the summer.

« This solidarity has encouraged me to be more positive, and this is the beautiful thing, » he said.

Grateful for the wave of support he’s received, Derbali refuses to dwell on the act of violence he fell victim to that night. « There is much more goodness than evil on this planet, » Derbali said. 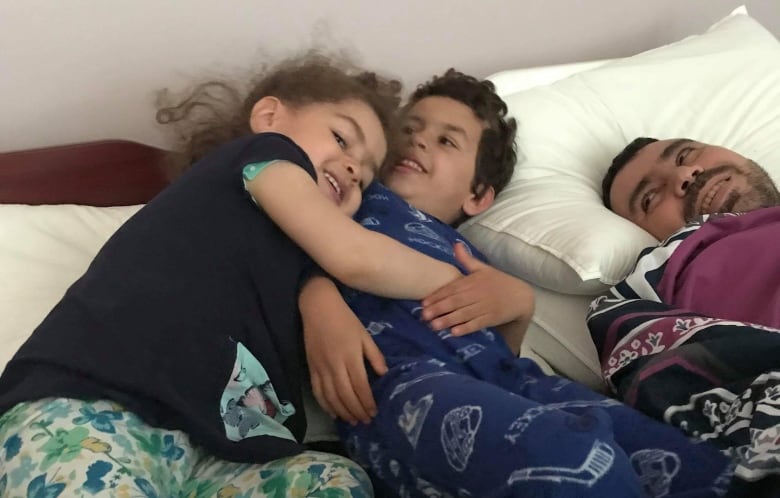 His home still needs a few more modifications to make it fully adapted to his needs, including an adapted shower and an elevated platform to allow him to go straight to the garage from the kitchen.

But he is able to help in planning all this, now that he can type on his keyboard with two fingers and answer calls on his cellphone, lessening the burden he felt he put on his family, just 12 months before.

« I can plan the work around the house, pay the bills and help my son with his homework. »

He is also there every afternoon to greet his children when they return from school, just a few blocks away.

Derbali has started sending out resumés  in hope of landing a part-time job, to supplement the income provided by the government’s compensation for victims of crimes.

But his daily routine still takes up a lot of his time. He requires three hours of home care every day, and the bullets that exploded inside his body cause him constant pain.

Nonetheless, he is committed to the humanitarian work he began long before the shooting. 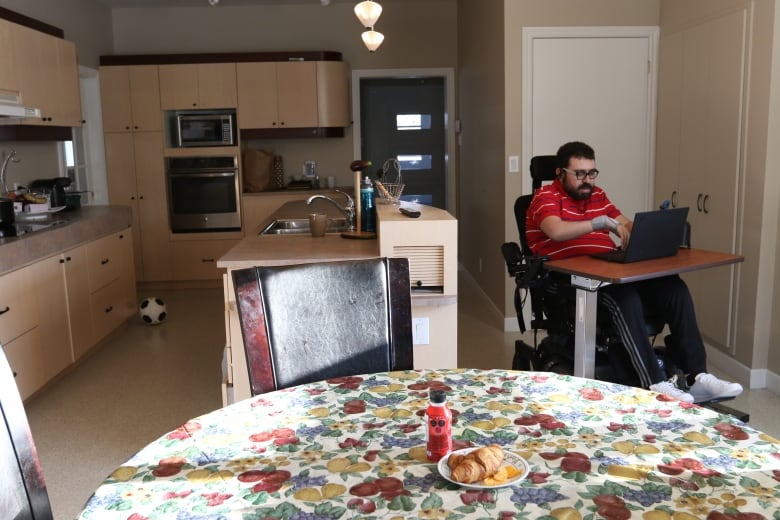 Derbali, who worked as an IT specialist, is now able to type on his computer and hopes to go back to work part-time. (Julia Page/CBC)

He continues to be involved in an orphanage he helped set up in Bolivia and now wants to do more within Quebec City, to foster dialogue between groups that may have been on separate paths for too long.

« We woke up after this tragedy and said ‘We have to be more open to all the communities,' » he said.

He is encouraging Muslim youth to get involved and volunteer for homeless shelters, for example.

« In this way we can fight hate crimes and we can fight ignorance. This is the most important thing, to have concrete actions, » he said.

Derbali has also started giving conferences in high schools to show young men and women the mark hatred left in his life, convinced these face-to-face meetings will leave a much deeper impact than any government initiative. 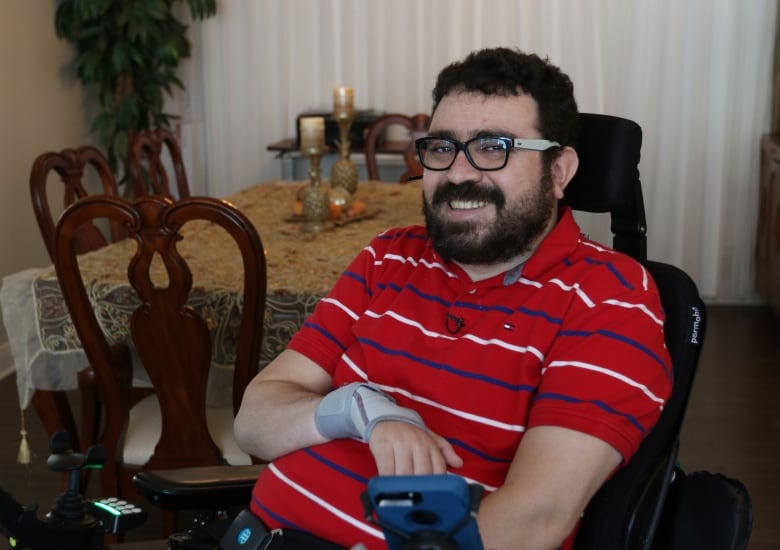 Derbali sits in the dining room of the new home his family was able to purchase thanks to a fundraising campaign that netted more than $400,000. (Julia Page/CBC)

« You know if we have an open-minded teenager, we don’t have to be afraid for his future. »

The two-year anniversary will be an important milestone for Derbali. So will knowing the fate that awaits the young man he crossed paths with in his place of worship, two years ago.

Convicted gunman Alexandre Bissonette will be sentenced just days after the anniversary, on Feb. 8, at the Quebec City courthouse.

Derbali says that will be another chance to turn the page and focus on the good he has seen emerge from that dark night.

« It’s my second life that is starting. »