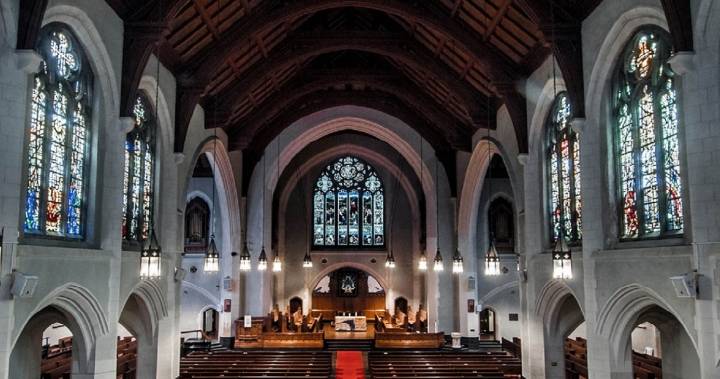 A downtown Vancouver landmark will be closing its doors for up to two years as it undergoes repairs, restoration, and a seismic upgrade.

St. Andrew’s Wesley United Church is a familiar sight at the corner of Burrard and Nelson, and known for interiors featuring French and Italian-stained glass windows, a vaulted timber roof, and angel reliefs.

Lead Minister Dan Chambers said the church, opened in 1933, is a historical piece of architecture.

“The architects were Twizel and Twizel, and although that sounds like a candy they were well-known and well-regarded architects of their time. And this is sort of the jewel of their Neo-Gothic architecture on the west coast,” said Chambers.

Over the next two years — or, as Chambers hopes, eighteen months — it’ll be getting new pews, walls, electrical systems, a new roof, and getting a seismic upgrade.

Chambers said the project is a big undertaking, but a necessary one.

“When we tried to imagine the city losing another worship space and performance space, we felt we had to make this happen.”

While its doors are shut, the church will be holding services at the Century Plaza Hotel. The First Baptist Church and St. Paul’s Anglican Church are also hosting some of St. Andrew’s Wesley’s events during the restoration.

The church will hold its last full Sunday service on February 3rd.

The week after, however, worshipers can return after service to the church, where Chambers said they’re invited to a celebration of the space on February 10.

“We’ll have a big potluck lunch. We’ll invite children and adults to write prayers of gratitude on the walls,” said Chambers.

“It’ll be a way of expressing our gratitude and our prayers of thanks for this sacred space that has served the needs of generations.”