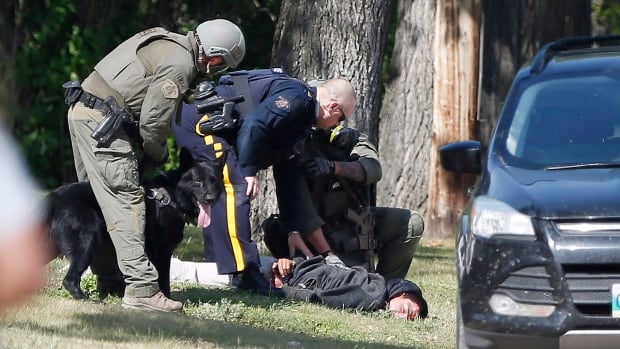 The man accused of shooting an RCMP officer during series of break-and-enters in western Manitoba has pleaded guilty.

Therae Racette-Beaulieu was charged last August with two counts of attempted murder as well as two counts of break and enter, possession of property obtained by crime and weapons-related offences.

He entered guilty pleas to one count of attempted murder, as well as to breaking and entering, stealing firearms and theft of a motor vehicle in Brandon provincial court on Thursday morning. He was 18 years old at the time of his arrest.

Cpl. Graeme Kingdon was shot near Onanole, Man., a town about 220 kilometres northwest of Winnipeg, just south of Riding Mountain National Park, on Aug. 29, 2018. RCMP said Kingdon and another constable had arrived at a report of a break-in at a rural property near Onanole at about 9:30 p.m. when shots were fired.

Kingdon suffered a fractured skull in the shooting, while the other officer was not injured physically.

The shooting sparked a massive manhunt that ended the next afternoon in Neepawa, Man.

Three other men from Portage la Prairie — Tommy Edward Beaulieu, 21, Shane Donovan Beaulieu, 30, and Delaney Marcus Houle, 23 — were also charged in alongside Racette-Beaulieu with two counts each of breaking and entering, possession of property obtained by crime over $5,000 and weapons-related offences.

Houle and Shane Beaulieu were previously granted bail, while Tommy Beaulieu was denied bail and remains in custody. All three have yet to enter pleas and are due in court again in February.

Racette-Beaulieu has been in custody since he was arrested in August. He has no prior convictions in adult court in Manitoba

A sentencing hearing is scheduled for March.