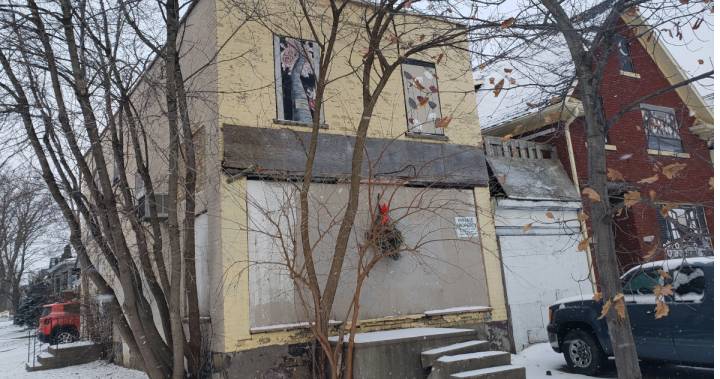 The city plans this even thought it does not actually own the building.

The property at the corner of Samuel and Brubacher streets, which features both a home and a commercial building, has been in existence at least 100 years but has spent the past 20 years or so of its existence boarded up.

The absentee owners have paid all of the property taxes on the building but have not paid the upkeep on it, which is why the city stepped in.

“Residents over the years have always wanted to see vacant buildings repaired, demolished, action taken,” said Jennifer Hassum, a spokesperson for the city of Kitchener.

She explained that new regulations were introduced in 2016 which required owners of vacant buildings to maintain a certain level of maintenance.

The two buildings are in the process of being torn down.

Having decided the vacant building did not meet those maintenance standards, the city brought someone in to fix the exterior of the “Inconvenience Store,” as well as a house on the property.

“As a result of that process, the city was advised to obtain an engineer’s report, as there were concerns the building may not be structurally sound,” Hassum said.

The city received the report in December and it concluded that the buildings were not structurally sound, and recommended it be torn down.

Staff for the city are currently putting the finishing touches on a tender contract which will be listed in February and the process will continue from there.

The absentee owners will be given a bill for the demolition and will also have to make a decision on what happens to the “Inconvenience Store.”

A beautification project by neighbours saw the windows covered with paintings.

Global News reached out to the owners of the property for comment but has not received a response.

Over the past couple of years, the store has been beautified by neighbours who tried to paint a pretty face on the building.

“A few of the windows on the second floor started breaking from underneath the plywood that was flaking and coming apart so there was glass falling down onto the grass below the building,” said neighbour Laura Peart-McBride.

So she helped organize a contest in which residents of the Central Frederick community could build on their neighbourhood’s artsy reputation and cover the windows with artwork.

“When people see it, they feel so much animosity towards it,” Peart-Mcbride explained. “So I thought, what if use the skills that we have, and that is a lot of people who are very talented with a paintbrush.”

“The hopes was that would beautify a negative space.”

She was also hoping the increased awareness of the old building might draw interest from someone who would rehabilitate it.

She says the project was successful in drawing interest but the current owners were not interested in selling the building.

A beautification project by neighbours saw the windows covered with paintings.

“We’ve had several developers interested. Most have been sent away,” neighbour John Cunningham said.

While Peart-McBride hoped it would be renovated, she understands that perhaps it is now too late to restore it and believes it has become a safety concern.

“A lot of the houses around it have babies and if something were to happen, and that house were to go up in flames, that’s worst case scenario,” she said.

Cunningham has been living in Central Frederick for 40 years and was around when the building was a thriving Newfoundland store where goods were brought in for people from Newfoundland and Labrador.

While he understands it is not the prettiest building, he believes it should survive.

“It’s quite classic in its own right,” he said. “It was what old neighbourhoods represented. You didn’t go two miles to get your bread and milk. You walked down the street.”

There are plenty of others in the area who will be happy to see the building leave, though it is unclear exactly when they will get their wish.

And once it is gone, the city says it will be up to the owners to decide what will happen with the empty lot.

“Just tearing it down and building a four-plex is not in the flavor of our neighbourhood,” Cunningham said.

Kevin Vickers says he is retiring as ambassador to Ireland, will return to N.B.