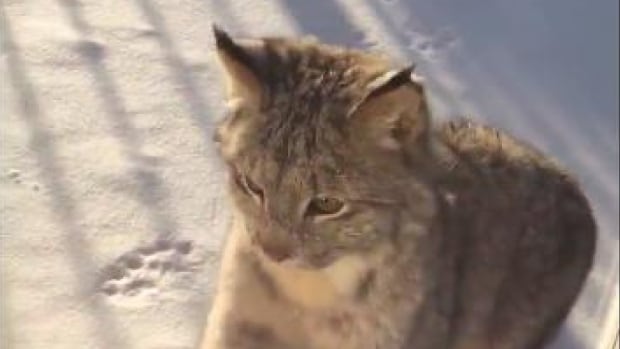 Of all the beasts of the northern wild, the lynx — a large forest cat with fur-spiked ears and saucer-wide paws – is perhaps the most elusive.

Even seasoned hunters rarely encounter the feline, according to the Canadian Wildlife Federation.

This week however, Lianne Mantla-Look captured not one — but two — of the wild cats on camera when they appeared on the back deck of her home in Yellowknife’s Kam Lake neighbourhood.

Mantla-Look was sick and in bed when she noticed something out the window.

But it wasn’t until Mantla-Look’s own pet cat Cheese began hissing that she realized what was going on.

« I looked and there was this baby lynx just hanging out. »

Mantla-Look’s video was shot during one of those pristine winter days, when the sun hangs low and radiant in the sky, and the posts and lintels of, say, a Kam Lake back deck, cast long, powder-blue shadows on the freshly-fallen snow.

But on this day, the frosty film that coated Mantla-Look’s upper-level deck was marked with the distinctive prints of cat — a cat much larger than Cheese.

In the video, a young-looking lynx can be seen prowling the deck, poking about as if looking for something.

At about 43 seconds in, the scene is punctuated by an exclamation: « Oh my god, » says Mantla-Look, as she pans the camera, dramatically, to the left.

« I started taking a video and some pictures and then I looked down on the main level of our house, just right down below the deck, and there was another lynx, hanging out down there, » she said.

My cat tried to protect us.– Lianne Mantla-Look

But before video viewers can digest the extraordinary event that is unfolding before them, Cheese reacts.

The first lynx has approached the window and is peering inside and pawing at the frame.

Cheese leaps at the glass.

« My cat tried to protect us, » said Mantla-Look.

Protect them Cheese did. The lynx, defeated, turns around and stalks off.

« After Cheese growled and hissed, the lynx eventually ran off and into the woods, » said Mantla-Look.

« I’ve never seen a lynx this up close and personal before, so it is a pretty incredible experience. »

Many questions remain: why did the two lynx (or lynxes, both plural forms are correct, according to Merriam-Webster) emerge from the wilderness in broad daylight? Why did they venture onto Mantla-Look’s property, specifically? What, on earth, were they looking for?

« I think it just kind of got curious, » she said. « And probably a little bit hungry. »