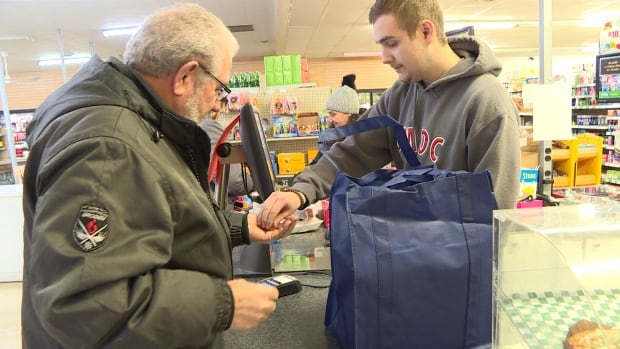 Four major stores in the Twillingate area have ditched the plastic bag in response to a push from the local DFO detachment.

Starting this month, shoppers at grocery stores in the area will only be offered cloth or paper options, as the shops accepted a challenge from the Department of Fisheries and Oceans to go plastic-free. The challenge officially started on Friday, although some stores made the switch earlier.

« Today is day one, so far, so good, » said Colin Stuckless, owner of the Stuckless Freshmart in Durrell on Friday.

« If we could do our little bit, and someone else does a little bit, maybe it adds up to a big amount. » 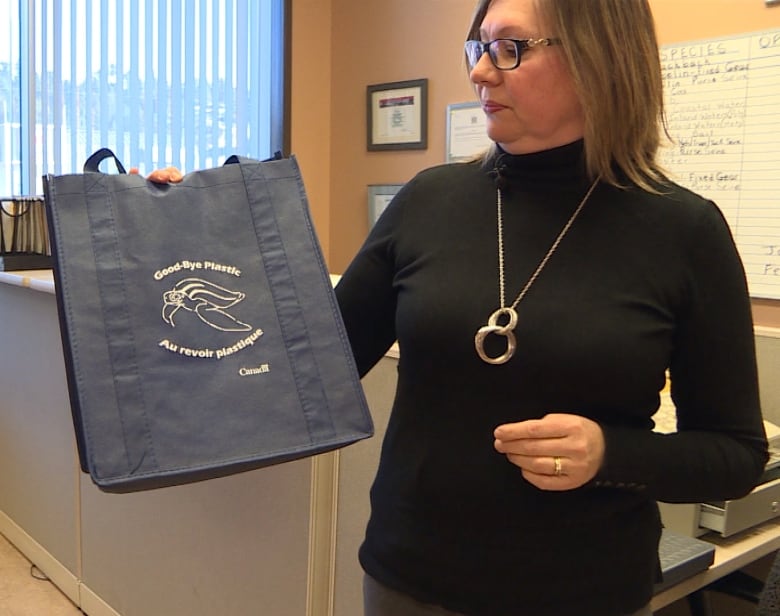 Judy Hillier shows off the reusable bag her detachment distributed to grocery stores in Twillingate. The DFO detachment created a tender for the bag, and bought 6,000 to hand out in the community. (Garrett Barry/CBC)

Customers at the Freshmart are being offered free reusable cloth bags, which were provided to the store by the DFO, at the checkouts.

Judy Hillier, a clerk at the Twillingate DFO detachment who lead the plastic-bag project, said 6,000 bags were bought by the detachment and distributed to the community.

« I mean, it’s part of the DFO mandate to protect species in the ocean, so if we can prevent plastic bags from making its way there, why not? »

The pledges are signed! 4 local grocery stores in Twillingate have accepted our <a href= »https://twitter.com/hashtag/DFONL?src=hash&amp;ref_src=twsrc%5Etfw »>#DFONL</a> challenge to say goodbye to plastic bags in 2019. They’ll offer only reusable or paper bags in an effort to reduce plastic waste in the environment. <a href= »https://t.co/nsijEXkh6r »>pic.twitter.com/nsijEXkh6r</a>

Along with the Freshmart, the two Foodland stores and the Independent store in the area have signed up. And if customers are complaining, Stuckless hasn’t heard it.

« Actually, response has been great, » he said. « We have a Facebook page that we put on to let people know what was going on, and it was a really great response, people all seemed to be in favour of this, because we’re hearing it all over the world now about plastic issues. »

Think of the turtles

Hillier said the impact of the plastic bag is obvious in Twillingate — all you need to do is visit the beaches in the summer.

« Plastic bags, they don’t dissolve. They don’t break up and go away. They break up, they rip up, they become micro-plastics … all of it ends up in the food chain, it’s ingested by all different types of sea creatures, » she said.

« We’ve been involved in Beach Cleanups over the years, there’s plastics on the beach everywhere. There are plastic bags ending up in the environment, in the trees, it’s everywhere. » 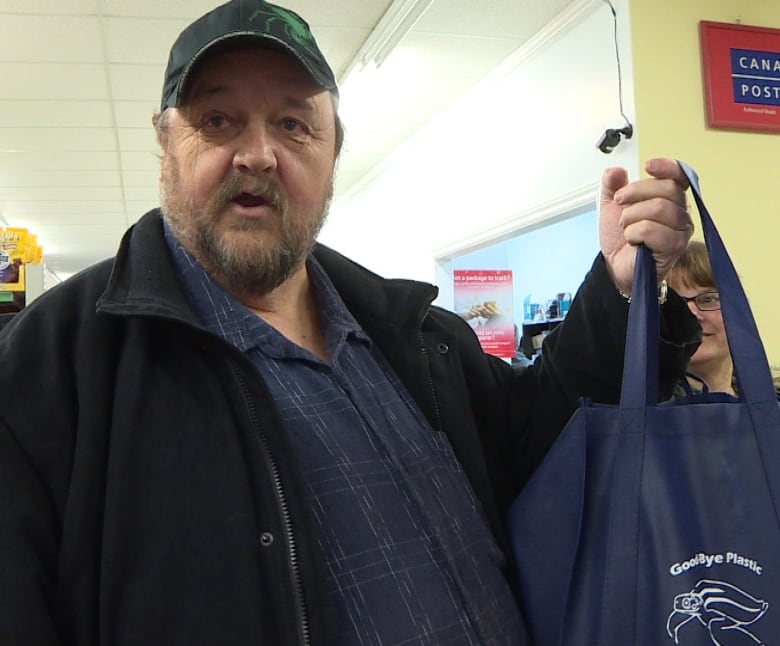 The project isn’t a ban on plastic bags in the community. Instead, it’s an opt-in challenge that DFO offered to grocery stores in the area last fall.

« This is the first time we’ve done anything like this, to this degree, so we chose to go local just to see how this would go, » Hillier said.

Shoppers at Durell’s Freshmart on Friday morning said they supported the project — even if not all of them remembered to bring the bags they have already picked up.

« Once we forgot, but from now on we won’t forget, » said David Burt.

He said his nephew, Shawn Bath — who dives in the waters near Twillingate to clean up junk from the ocean — has told him of all kinds of garbage he finds underwater. It’s part of the reason he supports the ban. 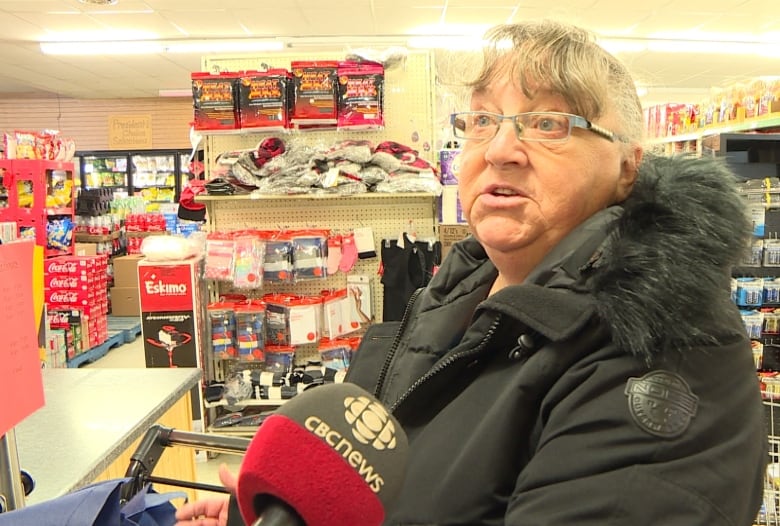 Josephine Cutler said she’s likely to reduce her bag consumption in total thanks to the new reusable bag. « I loves those bags, » she said. « Because with the plastic ones, you gathers them up in your house, and you got a mess. With those, they are stronger. » (Garrett Barry/CBC)

He also thinks his new cloth bags will be much less likely to find a landfill than the plastics that he used in the past.

« They’re blowing out of people’s pickups, they’re all over the road, » he said. « Something like [the new bags], you’ll be more careful not to blow it away. » 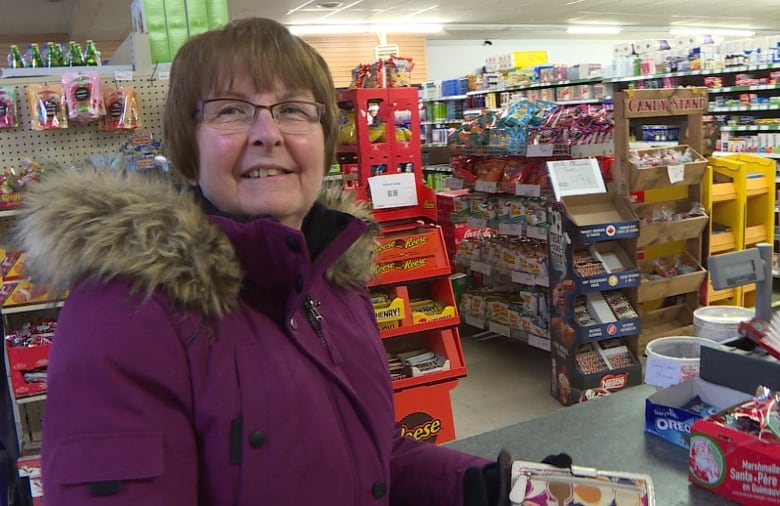 Doreen Gates was one of the few customers on Friday who remembered to bring their own reusable bag. She said she supports the plastic bag elimination, and wants to send less garbage to landfills. (Garrett Barry/CBC)

Hillier said she expects to see less plastic on the shores when next summer comes. In fact, it’s part of how she’s planning to evaluate the project.

« Success is when no more plastic bags are being given out by these grocery stores, people are bringing their own re-useable bags, » she said.

« Success will be when we see less plastic washing up on the beaches. »

Join the discussion on the CBC Waves of Change Facebook group, or send us an email: wavesofchange@cbc.ca.