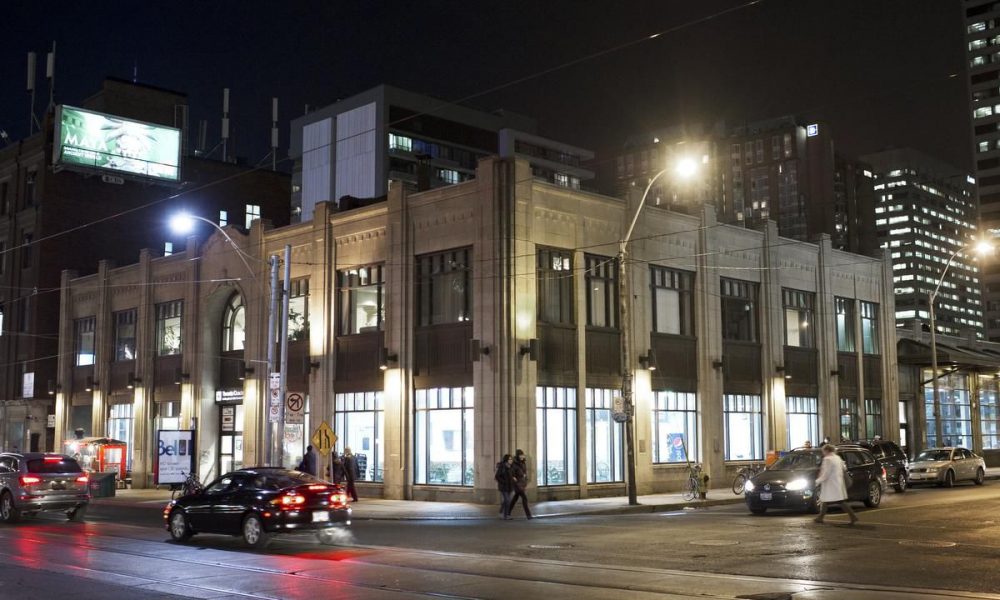 Toronto has never been kind to its architecture. This is a city, don’t forget, that has happily allowed countless heritage buildings to be demolished or reduced to empty facades that hide the modern mediocrities that replace them. Such is progress in this busy conurbation.

No surprise then that a town that once contemplated tearing down two of its most important landmarks — Old City Hall and Union Station — would stand by while the Toronto Coach Terminal at 610 Bay St. slowly falls apart. The stylish Art Deco facility, which opened in December 1931, could have done double duty as a nightclub. It was the kind of place where one imagines elegant women in long gowns making their entrance on a grand stairwell.

The stairwell is still there, but today it serves no purpose. The second floor and the restaurant that was once there are closed. Designed by architect Charles Dolphin, who also gave Toronto the General Postal Delivery Building, which survives as the façade of the Air Canada Centre, and the Consumer’s Gas Showroom on 2532 Yonge St. north of Eglinton Ave., the terminal is a remnant of a more optimistic age.

Though Canada was in the midst of the Great Depression, which devastated the country — at one point the unemployment rate was fully 33 per cent — Toronto somehow managed to build a bus terminal that had limestone cladding, stained glass windows, hand-painted faux stone walls and an interior illuminated by a cluster of crystalline chandeliers. Clearly, these were different times — attitudes to public architecture, let alone public transport, weren’t what they are today. Mobility was something to be celebrated, even glamourized. Men wouldn’t have thought of entering the terminal without a jacket and tie. Women wore hats and gloves.

Ninety-odd years later, people definitely do not dress up for travel. Whether by bus, boat, train or plane, getting around is something to be endured not enjoyed. Travellers today are better off dressing for comfort. Buses aren’t as uncomfortable and unhealthy as airplanes, but at a time when the car rules, they are considered the lowest form of public transportation, abandoned to those who can’t afford anything better. Even on the TTC, they rate well below subways and streetcars. Maybe that’s why the commission cares so little for those unfortunates consigned to ride the bus.

The GO bus terminal at Union Station confirms the lowly status of the vehicles it serves. Little more than a series of bays, it offers benches and a simple glass enclosure to shelter passengers. It’s so basic it seems more a structure than a building, engineered rather than designed. There’s nothing wrong with it, of course. As long as it’s not raining, snowing or freezing cold, it’s as comfortable as one would expect a loading dock to be.

If it represents anything, it is the triumph of austerity. We applaud the new terminal because it was constructed cheaply. The materials — steel, glass and concrete — are industrial. No limestone here. And don’t expect chandeliers. That would have been not just excessive, a waste of money and an affront to hard-working taxpayers, it would have been laughably — wildly — inappropriate.

The grandeur of Union Station across the road feels anachronistic, even ironic. With its massive stone columns, enormous arched windows and vaulted ceiling, its Great Hall was designed to impress those arriving in the Big City. Hearts raced and mouths gaped at the sheer scale, the spectacle and opulence of the space. The experience of Union Station was not quickly forgotten. But by the 1970s, trains and buses were in decline; people preferred to drive. Travellers gave way to commuters, and with the ongoing transformation of Union Station into a shopping mall, commuters are now being turned into consumers. Airports have met a similar fate.

Meanwhile, the Toronto Coach Terminal, that relic of a lost world, has never felt so lonely and isolated. Through all the changes, however, the remakes and neglect, the building retains a glimmer of its former glory. The attentive user will be rewarded with the odd glimpse of a city that could afford to be optimistic even during the worst of times. By comparison, contemporary optimism feels forced, even false. It is merely rhetorical.

Overwhelmed by demand, drowning in expectations, poorly run and bullied by its provincial masters, modern-day Toronto simply can’t cope. It does what it can but it’s never enough. The past isn’t just a foreign country; it’s also a foreign city.

Christopher Hume is a former Star reporter who is a current freelance columnist based in Toronto. Follow him on Twitter: @HumeChristopher