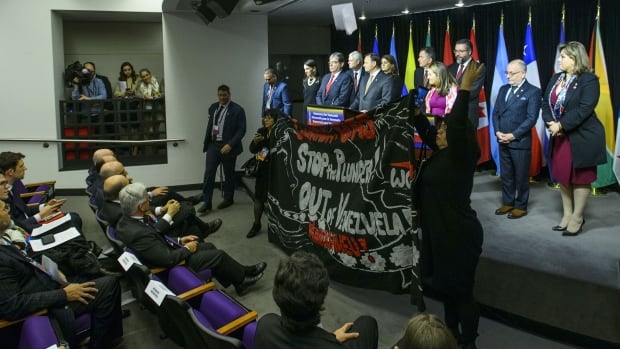 Organized labour in Canada is voicing its opposition to the federal government’s decision to embrace Venezuelan opposition leader Juan Guaido over the regime of Nicolas Maduro — which has been accused of human rights abuses and of winning the last election through vote-rigging.

They’re sharing that stance with the federal New Democrats, who came out against the federal government’s position late last month. « Canada should not simply follow the U.S.’s foreign policy, particularly given its history of self-interested interference in the region, » said a statement by NDP Leader Jagmeet Singh issued Jan. 24.

CUPE defended its position Monday when contacted by CBC News. « The statement speaks for itself, » said a CUPE spokesman.

Canada accused of siding with Trump

CUPE goes on in that statement to accuse the Trudeau government of choosing to side with a self-declared interim leader over President Nicolas Maduro, « who was duly elected by the people of Venezuela. » It also accused Ottawa of siding with U.S. President Donald Trump and American foreign policy.

CUPE said that it « rejects any attempt by the Canadian government to interfere with the democratic processes and sovereignty of the Venezuelan people. Given the history of U.S. involvement in the region, the actions of Guaido have all the signs of a coup d’état. 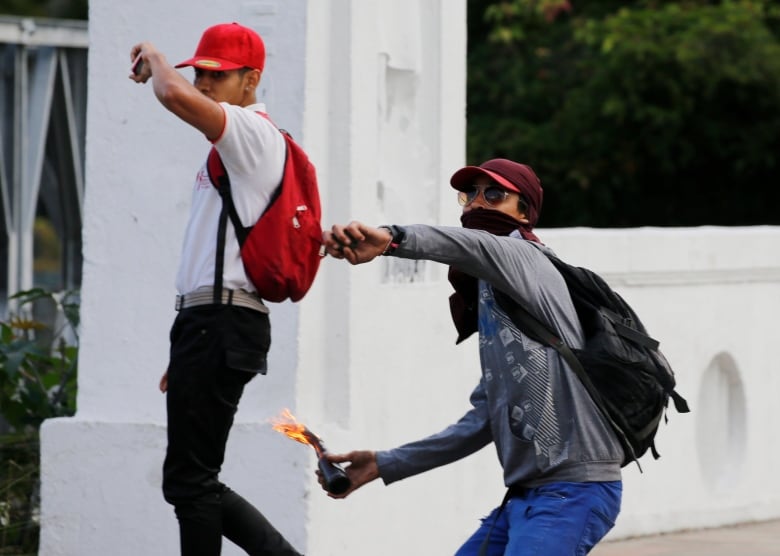 A masked anti-government protester throws a Molotov cocktail towards Venezuelan Bolivarian National Guardsmen who clashed with the small group of demonstrators when they tried to block a road after the group attended a peaceful demonstration called by self-declared interim president Juan Guaido, to demand the resignation of President Nicolas Maduro, in Caracas, Venezuela, Saturday, Feb. 2, 2019. (Fernando Llano/Associated Press)

« We warn Prime Minister Justin Trudeau against playing any role in bringing about regime change in another country. »

At the news conference closing today’s meeting in Ottawa of the Lima Group of nations, Foreign Affairs Minister Chrystia Freeland said the idea that opposition to Maduro is part of a coup plot organized by western democracies « could not be further from the truth. »

She said that Guaido derives his legitimacy from being the leader of the national assembly in Venezuela. She also emphasized the temporary nature of the Lima Group’s recognition of Guaido as interim president.

Freeland said Guaido’s interim authority is meant to be used solely to order free and fair elections to return Venezuela to democracy.

The Canadian Labour Congress (CLC), of which CUPE is a member, also issued a statement last week, warning of the dire consequence of « international interference » in Venezuela’s crisis.

But its statement was more measured than that of CUPE, focusing on calling for the government to « promote dialogue to foster a peaceful solution to the Venezuelan crisis. »

CLC President Hassan Yussuff is also the president of the Trade Confederation of the Americas, which includes the labour movement in South America.

He said he finds the international endorsement of Guaido « problematic » but his main concern is the prospect of military intervention — something the U.S., which is not a member of the Lima Group, has mused about. 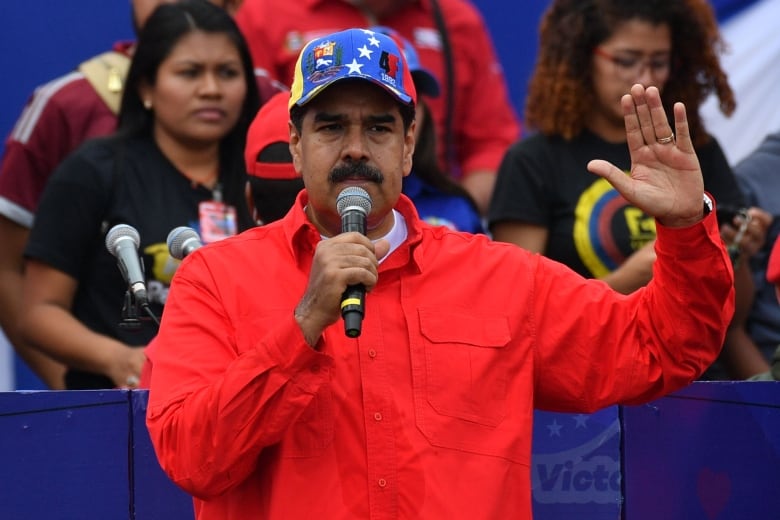 Venezuelan President Nicolas Maduro delivers a speech during a gathering with supporters to mark the 20th anniversary of the rise of power of the late Hugo Chavez, the leftist firebrand who installed a socialist government, in Caracas on February 2, 2019. (Yuri Cortez/AFP/Getty Images)

« I think Canada has an important role to play, but I think we have to distinguish that very differently than the interest of the United States, » said Yussuff in an interview with CBC News.

The Lima Group’s final statement out of Monday’s meeting in Ottawa emphasized the group’s « support for a process of peaceful transition through political and diplomatic means without the use of force. »

About 50 protesters showed up at the Lima Group’s closing news conference to denounce Canada’s moves so far. The protesters had varied backgrounds, but some represented organized labour.

National President of the Canadian Union of Postal Workers Mike Palecek said the protesters wanted to send a message that Canada should not interfere in a foreign democracy.

Palacek, like many of the protesters, said he doesn’t blame Maduro or his predecessor Hugo Chavez for the humanitarian crisis in Venezuela.

« There’s no doubt that there’s problems. A lot of those problems are a result of precisely of the economic sanctions levied against Venezuela and the fact that we’ve seen oil prices crash globally, » he said.

Two of the protesters, masquerading as journalists, interrupted the Lima Group’s closing news conference, shouting, « Hands off Venezuela » while holding a big black sign that read « Stop the plunder. »

Outside the venue, the protesters made speeches about the benefits to Venezuela’s poor of the Bolivarian revolution, led by the late Chavez. No mention was made of the current situation: millions of Venezuelans don’t have enough to eat, there are massive shortages of basic medicines and the country’s inflation rate is slated to rise to 10 million per cent this year.

At least three million people have fled Venezuela since 2015.