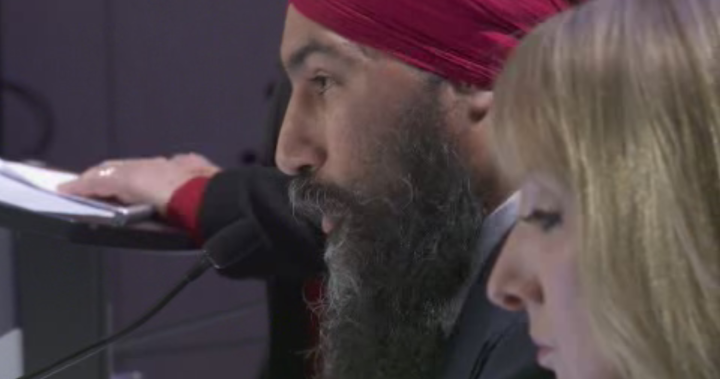 NDP leader Jagmeet Singh was one of a number of candidates in the riding of Burnaby South who took heat at a fiery debate that happened as part of a federal byelection campaign on Wednesday night.

WATCH: Jan. 19 — Races heating up in key byelections in B.C.

As the debate began, a protester wearing a jacket that displayed the logo of the American Indian Movement started yelling toward the stage, directing his anger at Singh, though he also had harsh words for parties beside the NDP.

“The last part of your land, you guys want to take it for oil? You don’t have consent,” the protester said.

Singh responded, but the protester spoke up again: “yeah, why are you supporting LNG then?”

Singh has publicly taken B.C.’s side when it comes to the expansion of the Trans Mountain pipeline — he’s 100 per cent opposed, he said in May.

He later said the federal government should abandon the expansion altogether.

The NDP leader said he would be happy to chat with the protester after the debate, but he wasn’t interested.

“We don’t want you elected if you’re supporting pipelines,” the protester said.

“We’re used to the white Europeans taking our land, now we’ve got coloured people, coloured people coming here, saying we want your land too,” he went on to say.

The debate was hosted by the Friends of Canadian Broadcasting, an organization that believes a “strong CBC, fearless journalism, and our shared story make us who we are.”

The focus of the debate was expected to be the future of Canadian media in the age of Facebook.

However, other topics soon took over — and a battle over signs erupted on the sidelines.

Conservative candidate Jay Shin talked about the federal Liberals’ promise to balance the federal budget by 2019: “that hasn’t happened.”

Thompson talked about how she had been banned from Facebook three times.

Thompson has drawn controversy for her opposition to SOGI 123 — a curriculum focused on sexual orientation and gender identity within B.C.’s school system.

In the past, she has said that it teaches “gender-fluid ideology to all children in British Columbia.”

Of being banned from Facebook, she said, “I wear it as a badge of honour, because it means I was speaking truth.

“Speaking truth has become an act of courage and it ought not to be that way in Canada.”

Thompson drew raucous cheers and applause from supporters who carried large campaign signs to the debate.

READ MORE: ANALYSIS — With the NDP focused on B.C., Jagmeet Singh may lose a crucial beachhead in Quebec

However, one issue related to broadcasting and media did generate discussion among the candidates — “fake news.”

Asked whether any of the candidates had been victimized by fake news in the past, both Singh and Thompson said yes, they had.

Singh said an ad circulated recently that suggested he and his wife lived in a $5.5-million mansion.

“And my wife is like, if that’s the mansion we live in, why don’t you take me there?” he said, drawing laughs from the audience.

Thompson, meanwhile, said reporting had emerged that suggested she had once stood alongside an organization that, she claimed, she had never heard of.