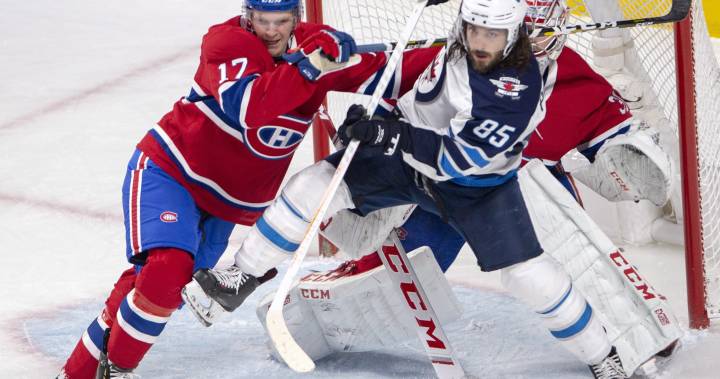 The Montreal Canadiens are playing four straight games that will tell them very clearly where they stand in the NHL’s hierarchy.

The Winnipeg Jets and Toronto Maple Leafs are home games, then the Habs take to the road for the Nashville Predators and Tampa Bay Lightning. All four opponents have a chance to carry the Stanley Cup this year. The Habs will know by this time next Saturday whether they are in the mix of greatness, or if they have some miles to travel still.

First up, the best in the west: the Winnipeg Jets, whom the Canadiens dominated 5-2.

He has the odd, rather eventful gaffe, but you sure can’t deny Jonathan Drouin is having a remarkable comeback second season for the Habs.

This is the hottest that he has been. Drouin in his last 10 games has four goals and nine assists. He had a good run with Max Domi, but it appears head coach Claude Julien’s decision to separate the two has worked out for both of them, especially Drouin. First period, Drouin came through with a goal to tie it up at one, darting through bodies to receive the pass in the slot from Brendan Gallagher, then fired a one-timer through Connor Hellebuyck.

In the second period he was flying down the wing, then put in the perfect shot into the top corner. Drouin has now played 55 games this season, counting 17 goals and 29 assists for 46 points. He is on pace for a 69-point season, eclipsing his career best of 53 points. It’s remarkable what being in better shape can do to your overall game, and especially the last 20 seconds of your shift. Late first period, Drouin was flying — on the back check, no less.

Can’t say we saw that for a season and a half, but that’s what better lung capacity and heart does for your legs. Everything gets easier.

One of the important measurements of a player and a line is how they compete against the best lines in the league. This season, without much fanfare, Phillip Danault has been stellar, taking on the best in the game and passing with highest honours.

Danault lined up with Drouin and Gallagher against the Jets’ top line of Mark Schiefele, Blake Wheeler and Kyle Connor. Many players and many lines have been destroyed this season against these three Jets stars, but the Habs were doing the destroying in this one. The line finished with a near-70 Corsi, which is total domination.

Drouin was everywhere; he was flying. Danault was doing what he does positionally to set it all up. He also counted two assists on the Drouin goals and one more assist on the Shea Weber goal. He ended his night with a goal for his 40th point of the season, tying a career high. Gallagher was working his tail off as per usual, counting two assists. Everyone is always curious whether Danault is a third-line centre or a second-line centre, and the truth is he’s a match-up centre. That makes him a terrific playoff centre.

It’s when you see that the Habs can win huge line match-ups like this against the best in hockey that you know that they can surprise this season — that this success is not a mirage. Sure, the Jets best also had their moments, but the Habs were neither intimidated nor outclassed against perhaps the second best team in hockey behind Tampa Bay. This predicts a future with a possible shock or two in it before this season is done. The playoffs are all about match-ups, and the Habs have a centre that matches up with the best in the game and does not get schooled. In fact, he can even dominate them like Schiefele in this one. It’s time to stop sleeping on what the Habs have in Danault.

WATCH: Call of the Wilde — The Habs are back in action

Jesperi Kotkaniemi now has his goal total to 10 on the season, having scored four goals in his last four games. The coaching staff told him that he has a good shot and to use it more, which seems to have been good advice. All night, too, he simply makes the right play. He finds his pass, and he understands the situation when it is time to be safe. He is 18, but he seems 28.

It was another night where Victor Mete was flying. He joined the rush to almost score his first goal as an NHLer, but it just went wide on the partial breakaway. Midway through the second period, he quickly found Gallagher for a sure tap in that was stopped. In the third period, it again looked like he had his first on a five-footer, but it just would not go in for him. Mete uses his speed to pull away from checkers. He would have had a tough time in the brawny NHL, but when you can use your speed now, Mete is one hell of a 100th pick overall in the entry draft. Sure, you can’t tell when he shoots if it was meant to be a pass, but everything else he does well.

Overall, a word is due about everyone — the entire team.

The Habs weren’t playing the Ducks in this one. This was the Winnipeg Jets, and if not for their keeper, it was 6-1 after the second period. Drouin could have had four himself. Nicolas Deslauriers had a gaping net, but let the only place that Hellebuyck could possibly make the save be where Deslauriers shot it — on the ice, where the Jets keeper darted out his pad in desperation. The Habs were firing rockets from everywhere and the Jets were overwhelmed. One of the best teams in hockey found the Habs had too much speed for them.

This was a statement game. Not because they beat the Jets, but because they dominated them.  It didn’t need a pleasing scoreline. The Habs had 53 shots. Just the tilt of the ice told you that the Habs could very well be for real, and if you have been underestimating them, maybe it’s time to stop.

WATCH: Call of the Wilde — Going into all-star break

Carey Price was an 890 goalie at one point this season. The Habs were winning games but they needed four goals to do it, and they got those goals to their credit. However, that script was not sustainable. They needed their goalie to come back to the numbers that he is capable of, and he has. With a 953 save percentage in January, Price is looking just as stellar in February. Price was among the worst goalies in hockey to start this season, but now he is back near the top. He likely has too far to go to finish top five in save percentage, but he’s making a run for it. Price has his season-save percentage to 917, good enough for 13th in the league. He needs to get to 924 to get top five. Not likely attainable, but for the Habs, anything resembling this Carey Price and that playoff spot is all but assured. A number of 953, considering a goalie faces on average 30 shots a game, is a goal and a half allowed per game. Give the Habs that number allowed and they’re going to win a lot of hockey games the way they’re skating.

Some interesting thoughts coming from Nick Suzuki this week. He is one of the Habs’ top prospects playing for the Guelph Storm in the Ontario Hockey League.

Suzuki is trying to create not more, but create faster. “The Canadiens asked me to think faster and run my games with even more speed”. Suzuki said that he would slow down the game last year deliberately to open up options for himself, but the Habs don’t want him to do that. They know that he will not have that kind of time at an NHL level, so they’re trying to get him to think the game in a quicker manner. As a result, Suzuki says he’s not worrying about his offensive numbers this season, but is instead focusing on his development. For those that say the Habs don’t need another centre, Suzuki at the pro level will be a winger. He can play both, but his game translates better to winger.

The Habs could welcome Suzuki to the roster as soon as next season, though if he had a season in Laval, it would not be an issue either. There are spots available on the fourth line next year, but you must win that spot. It won’t be handed to you with Ryan Poehling also likely to be fighting for a place on the roster. It’s exciting to think already what the Habs will look like next year and how they will improve from season to season. Players like Max Domi and Drouin are still getting better. Jesperi Kotkaniemi will definitely be exciting to watch develop as he leaves his teenage years behind. The Habs will lose not a single core player next season. The Canadiens have only Jordie Benn and Antti Niemi as unrestricted free agents next year. The Habs could be right in the mix next year, if they aren’t already. Pretty exciting times considering what only last year looked like.

Joni Ikonen is back from long term injury playing better hockey than last season at a top level. Ikonen played 22 minutes in one contest this week, showing that he has bounced back from his knee injury well. In 52 games last season, Ikonen scored only four times. He has three goals in his last eight games.

In Russia, Alexander Romanov continues to grow in confidence. After not getting a point in his first 32 games in the KHL, Romanov has a goal and two assists in his last five games. He is joining the rush on a regular basis and getting more ice time. His learning curve has been stunning — except to Trevor Timmins, of course, who found this gem. It was only seven months ago that he was drafted when experts thought Timmins had made a massive mistake going right off the board with his pick. After making the KHL as an 18-year-old, Romanov was then the best defenceman at the World Junior Championships. GM Marc Bergevin has indicated that Romanov could play as a third pair blue liner in the NHL easily already.

Expect the Habs to acquire a depth defenseman at the trading deadline. If the club is continuing to push for a playoff spot, as appears likely, Bergevin will need to have more defenders who can play minutes in the playoffs. The club does not have enough depth defensively whatsoever. They may have not been planning for this, but Bergevin often speaks of how many defencemen you need in the playoffs because of injuries, and the Habs are short by one if not even two. The deals will likely be met with disappointment as fans will hope for a first pairing marquee defender, but expect instead two defenders who can play a solid 5-6 role.