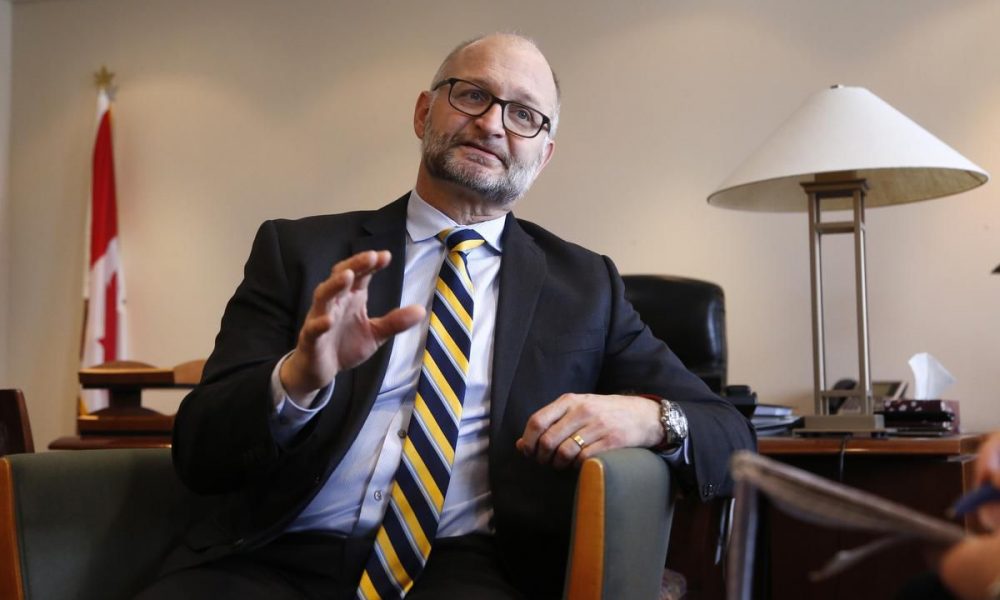 OTTAWA—Justice Minister David Lametti says foreign affairs will be a factor if and when it comes time for him to make what he acknowledges is a political decision whether to extradite Huawei executive Meng Wanzhou to the United States over China’s furious objections.

Lametti, named three weeks ago to take over the justice file after Prime Minister Justin Trudeau shuffled Jody Wilson-Raybould off to veterans’ affairs for unspecified reasons, now finds himself on the hotseat in both the Meng Wanzhou affair and the SNC-Lavalin prosecution, among other unfinished legislative business.

On Thursday, in his first sit-down interview, Lametti admitted he had no idea why Trudeau picked him to be Wilson-Raybould’s successor, and tried to draw a distinction between his job as the government’s top lawyer and being a cabinet member, Quebec minister and MP, on all those files.

Lametti said he will often prioritize his role as attorney general or chief legal advisor to the government and its departments.

But he said as a cabinet member he has a political role to play in helping to create and direct policy.

Lametti acknowledged that the welfare of three Canadians facing “arbitrary” justice in China may depend on whether Meng is extradited to the U.S. to face fraud charges connected to alleged violations of sanctions against Iran.

But he insisted the plight of the Canadians and Meng’s extradition are “two separate matters” and he will only weigh in at the end when it requires a political decision that takes account of foreign affairs.

He said Canada has, “as a matter of a political decision, created what I think is an excellent process, which is to say a section in the government will treat this (Meng) case neutrally as it runs through the courts, and the minister of justice will not have any say in the matter.

“Nor will any other political actor, and that is what we have done,” he added.

“It is only, if and when there is a committal order to extradite by a judge that the minister of justice will enter into the proceeding and make what is, then, a decision based on all the evidence, but recognizing that, at this point, foreign affairs is a political matter, and … make a decision.”

Extradition law and jurisprudence explicitly state that a minister may take into account political factors such as good international relations or international legal cooperation frameworks. A minister may also refuse to extradite if he or she believes the prosecution is politicized, or being used to try someone for a political crime, such as treason or espionage.

Amid a firestorm of criticism from Beijing, Trudeau’s government has tried to avoid discussing what political factors may come into play in the case. Trudeau fired John McCallum as Chinese ambassador for his public speculations about the case.

Sitting in a sparsely furnished ministerial office he hasn’t yet moved into, Lametti acknowledged that, “sadly,” there are two Canadians detained in China. He was referring to Beijing’s arrests of Michael Kovrig and Michael Spavor in apparent retaliation for Meng’s arrest. He said their detentions are believed to be “politically oriented in nature.” He also mentioned a third case, that of Robert Schellenberg, a Canadian convicted of drug trafficking, and said “we feel that a sentence has been arbitrarily jacked up to a death penalty.”

None of it changes his approach, he said.

“If we link the two, then we’re falling victim to the very same kinds of processes that we’re criticizing in other countries.”

The international assistance group in the Canadian justice department will assess the U.S. case against Meng and decide, by the end of the month, whether to issue what’s called an “authority to proceed.”

Lametti said his officials are “evaluating … whether there is some basis for the laying of the (U.S.) charge. It’s not determination of guilt or innocence by any means, but it’s a way of saying this a legitimate exercise on the part of the foreign (U.S.) government.” It’s a step he said is “important to the rule of law.”

Lametti said the Canadian legal system allows “any person of any stature, whatever standing, in this case of whatever country, the ability to defend themselves in front of a very impartial, highly qualified, Canadian judge, and that’s an important value to protect.”

At the same time, Lametti said the Canadian government, its consular staff and the minister of foreign affairs are “doing their best to make sure that we, on a political level, can intervene with the Chinese government, on behalf of our Canadian citizens.”

Lametti is on leave from McGill University where he taught law.

He is an expert in intellectual property and copyright issues.

Asked if he had any sympathy, given that background knowledge, for U.S. charges that Huawei, the Chinese corporate giant, steals American technology, Lametti refused comment on “any specifics, because I don’t see the evidence in front of me. I haven’t read the evidence. I haven’t read the court documents as regards the trade-secrets part of that case.”

In general, however, he said intellectual property has become a larger concern with trade secrets now being “treated as a criminal matter in certain jurisdictions, and we have agreed to do that in the most recent trade agreement with the United States and Mexico.

“I agree that we needed to have a trade agreement, and there are a number of different provisions in that agreement that reinforce and really illustrate the importance of intellectual property in the current economic order.”

As for how he will square his role as a Quebec minister and MP with his role in the SNC-Lavalin affair that broke Thursday, Lametti said he does not believe he is compromised by being from the province where SNC-Lavalin is of huge economic importance.