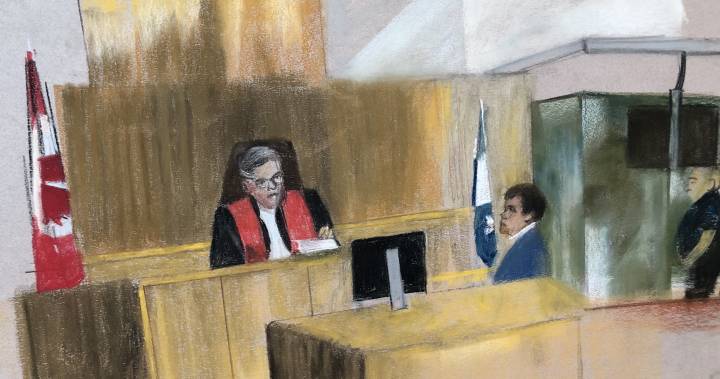 Alexandre Bissonnette, the man responsible for the 2017 Quebec City mosque shooting, has been sentenced to life in prison with no chance of parole for 40 years.

The judge has just said he believes it would be fair to sentence Bissonnette to live in prison, without parole eligibility for 35 to 42 years. He says it would be cruel and unusual to not give the prisoner some hope that he could one day be free.

Quebec Superior Court Justice François Huot chose not to give him consecutive sentences, where he would have been eligible for release in 150 years.

The judge said Friday he took all 24 past decisions of consecutive sentencing — Section 745.51 of the Criminal Code, which was added in 2011 — into account before rendering his decision.

WATCH BELOW: A timeline of the deadly Quebec City mosque shooting.

Huot concluded demanding consecutive sentences was “constitutionally invalid” and is calling for the federal government to reform the law.

Before giving his sentence, Huot warned the room of about 250 people to be respectful of the decision, noting that no protest will be tolerated.

“[It was] a premeditated and gratuitous act,” he told the court, adding that it was “a tear of our social fabric.”

“Despite the time passed, it will remain forever engraved in our collective memory.”

Huot noted Bissonnette was not working in January 2017 because of an anxiety disorder. Doctors had prescribed him Paxil.

Judge Huot says he has a 246 page sentence. Won’t read it entirely today.
Bissonnette is moved to the witness stand… and is now standing up as the judge begins to read.
Huot says this crime will be forever written in blood in the history of Quebec City, the province and Can.

The judge summarized Bissonnette’s internet search history, which included looking up the 2015 San Bernardino attack, information on how to prepare his guns and research on other possible targets — including feminist groups, schools, malls and airports.

He mentioned an incident two months before the mosque attack when Bissonnette loaded his weapons and went to a local mall in Quebec City intending to commit mass murder, but changed his mind.

READ MORE: Inside the mind of a killer: What we now know about Alexandre Bissonnette’s Quebec mosque shooting plot

Huot spoke of the night itself, when Bissonnette walked into a mosque in the provincial capital at 7:54 p.m. on Jan. 29, 2017, and opened fire during evening prayers.

WATCH BELOW: Alexandre Bissonnette parents arrive ahead of sentencing

Citing security footage, Huot mentioned “a small girl with a pink hat runs without knowing where to hide,” until someone pulls her to safety. There were four children in the mosque that night.

He noted Bissonnette acted with “calculation, determination and in cold blood,” adding he held racist beliefs and the crime was precipitated by a “visceral hate for immigrants.”

Judge Huot went over the run up to the crime from Bissonnette’s POV — now he’s explaining how the victims came to be at the mosque.
He just told the story of one man, and how he kissed his daughter before leaving to pray… and never made it home.

The entire massacre was 90 seconds. There were 48 shots fired in that time.

As the judge talked, Bissonnette stared down at the ground, moving only occasionally to fidget or look briefly up at the ceiling.

According to the numerous victim testimonies, many of the people there that night are still traumatized, live in fear, and some are unable to work because of the terror they feel.

Bissonnette’s trial was expected to be a landmark case, forcing Huot to declare last October that he needed more time to decide between sentencing him consecutively (150 years) or concurrently (25 years).

Bissonnette’s defence team had previously stated consecutive sentencing should be declared unconstitutional and invalid as it contravenes Article 12 of the Canadian Charter of Rights and Freedoms, which protects citizens from cruel and unusual treatment.

Children who are afraid to go back to the mosque, men seriously injured from gun wounds who still have physical pain, families in financial ruin, and the terror and deception of those who moved to Canada for the purpose of escaping violence in their home countries… https://t.co/pc6Na2bC4P

The judge is commenting on the love, loyalty and courage of the parents of Alexandre Bissonnette. The father in particular was here every day throughout under difficult or uncomfortable circumstances.

“It (Section 745.51) denies outright the possibility of humanity for a person,” he told Huot last summer.

“Without hope, what is the meaning of a life? There isn’t any.”