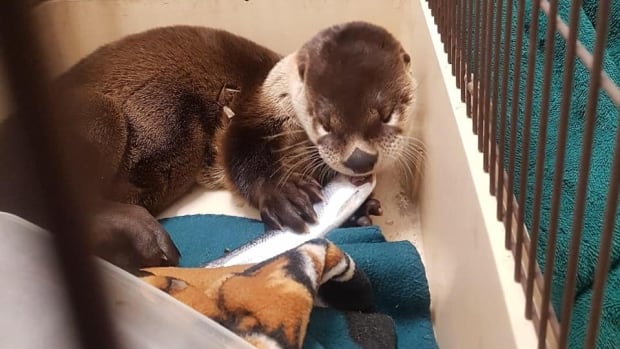 The Winnipeg Humane Society’s emergency response team has had some pretty odd calls over the years, but likely nothing otter than one it received Friday afternoon.

The agency responded to a report of an otter living under a downtown dumpster.

Nihal Bhullar, a 20-year-old University of Winnipeg student, called authorities after stumbling along the otter over her lunch hour.

Bhullar was walking back to class when she noticed a small crowd around a garbage bin between two apartments on Balmoral Street, across from the university’s east doors.

Bhullar thought she had misheard the man who told her there was an otter under the garbage.

‘He needs to be saved’

Eventually the crowd dispersed, and Bhullar found herself alone with the otter.

« I thought, ‘I’ve got to call someone because he clearly does not belong here,' » she said.

Bhullar was joined by Dawn Williams, who lives in the apartment at 391 Balmoral St. next to the otter’s chosen dumpster, and the pair waited for help to arrive. 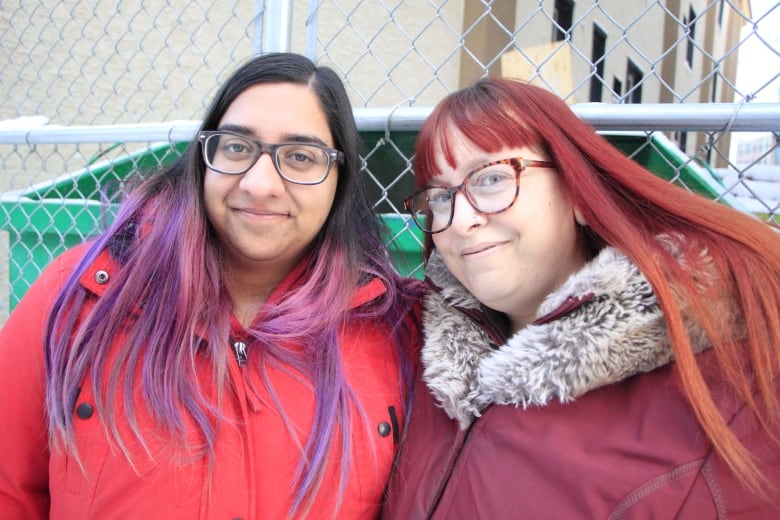 Nihal Bhullar, left, and Dawn Williams stand next to the garbage bin where the otter was found Friday. (Shane Gibson/CBC)

Bhullar said they talked to the otter and made sure the misplaced mammal didn’t leave the safety of the garbage can.

They also gave the otter a name.

« We called him Otty the otter, » laughed Bhullar.

« Me and Dawn were outside in the freezing cold for two hours with him — obviously we came up with a name. »

The pair said Otty looked healthy and happy enough to be living under a garbage can, at least until until crews arrived. 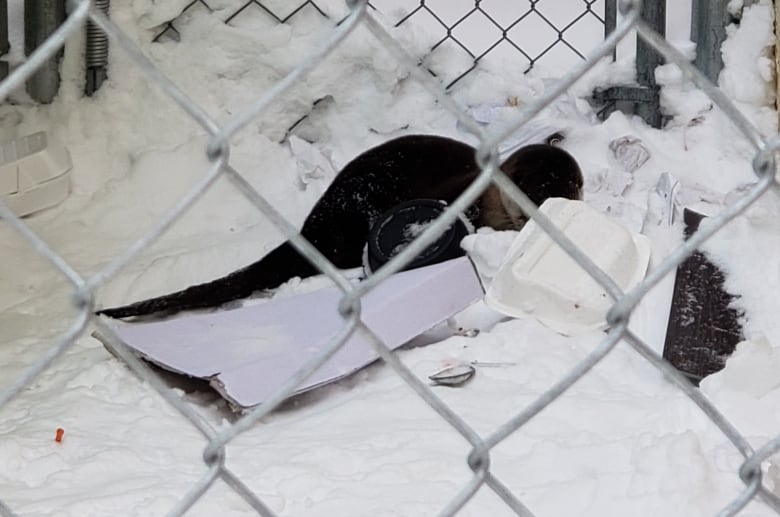 The otter can be seen surrounded by garbage at the dumpster. (Photo courtesy of Nihal Bhullar)

« He managed to escape from them and run under a fence, and then he went under another fence and another one after that, » she said.

After his flight, Otty ended up in a gap behind the apartments.

Thankfully, Williams was there to let rescuers in the front of the apartment block and lead them to the back door where they came face to face with the wily animal.

‘It was not natural habitat for him’

After a further brief chase, crews caught Otty using a net, and put him in their truck bound for the humane society, where Heather Neil, the manager of investigation and emergency response, said Otty spent the afternoon « resting comfortably. »

« We have him tucked away, we keep the lights dim and kind of keep him away from people so we don’t cause him any stress, » she told CBC News.

Neil can’t say why or how the otter got under the dumpster, but figures Otty had been there for a few days based on reports they had received and the fact the otter had built a pair of small slides in the snow leading to the dumpster — just like the animal does to get down riverbanks in the wild. 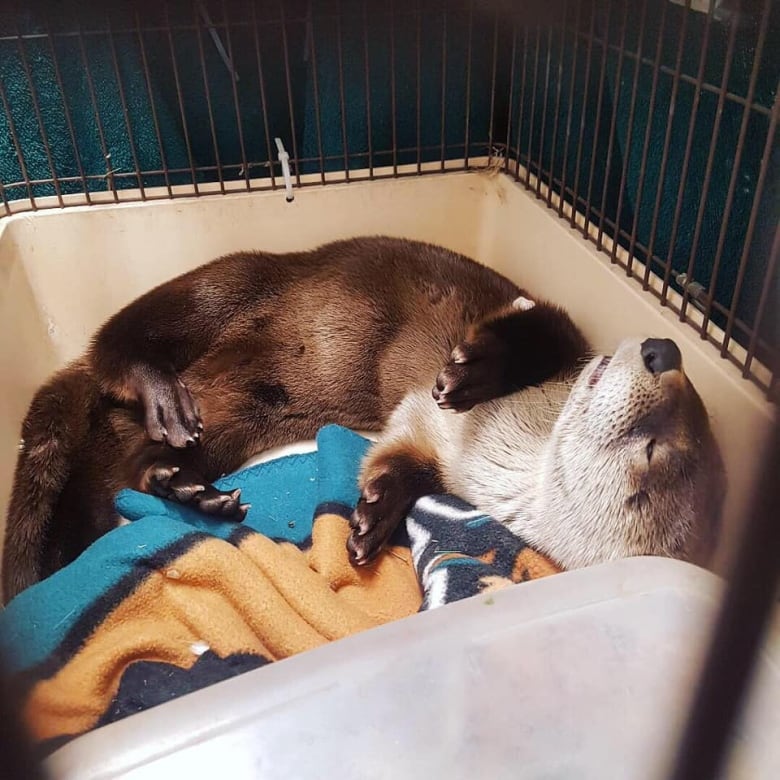 « We don’t come across otters, generally, you see them along the riverbanks, and that’s where their natural habitat is, but this one was quite a ways away from the river, » she said.

« I have no explanation about how he got there, but it was not natural habitat for him. »

She said it’s the first time the humane society had received a call about an otter.

A spokesperson from Manitoba Conservation said otters can live within city limits along the Red River and have occasionally been reported roaming in the city.

Otty was taken to a Wildlife Haven Rehabilitation Centre, where director and animal care volunteer Dan Diawol said the out-of-the-water otter has been relaxing on a soft towel and enjoying a diet of frozen fish.

Diawol said Otty, a male around a year old, came in weighing around six kilograms — a little on the light side for an otter — but otherwise healthy and with no physical injuries.

« He seemed in fairly good shape, generally speaking, » he said. 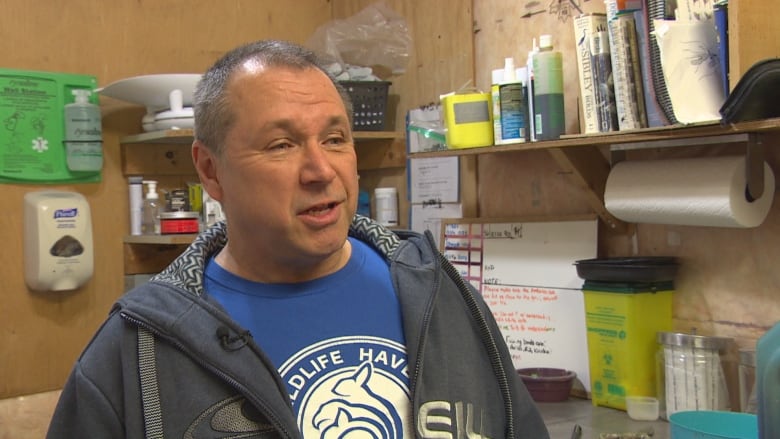 He doesn’t know for sure, but Diawol thinks the otter may have came up from the Assiniboine River to start his adventures in downtown Winnipeg.

« If they have a den, they’ll keep an opening available — kind of like a ice fishing kind of thing — where they’ll be able to go into the water, » he said.

« Who knows? Maybe with the cold weather, that froze over and it was unable to get back into the water so it was just wandering around looking for food. »

Diawol said it’s unusual, but not concerning, to find an otter wandering the streets of Winnipeg. 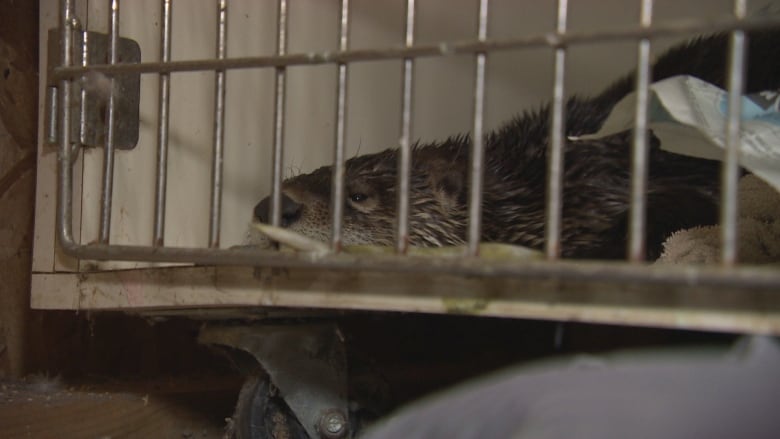 Otty has been enjoying a diet of frozen fish since arriving at Wildlife Haven Rehabilitation Centre. (Warren Kay/CBC)

« There’s wildlife everywhere in urban areas and in most cases we just simply don’t see them, » he said, adding the otter-spotters did the right thing to notify the humane society.

« In many case, they should be leaving wildlife alone, » said Diawol.

« It’s very natural for them to be out there, but because of the situation [in this case], it’s something that we would recommend to come to our care, only because it was in such an unnatural setting. »

Diawol said the centre will work with Manitoba Sustainable Development to decide where and when to release the intrepid otter back into the wild.