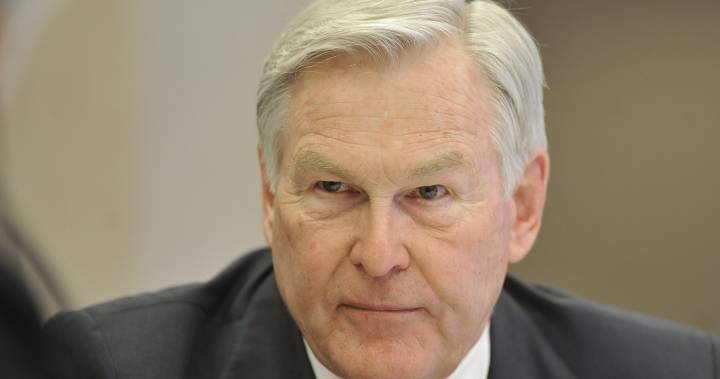 His death was confirmed by a statement from the University of Toronto, where Wilson served as Chancellor from 2012 to 2018.

He first entered politics in 1979 when he was elected MP for the newly created Etobicoke Centre riding.

Finance Minister Michael Wilson is pictured showing off his new shoes prior to the upcoming federal budget on Feb. 20, 1986 in Ottawa.

His life in politics first ended in 1993, but he was later appointed Canadian ambassador to the United States by Prime Minister Stephen Harper in 2006, which he served until 2009.

Wilson had senior roles at UBS Canada, Royal Bank of Canada and most recently was the chairman of Barclays Capital Canada.

After his son Cameron died by suicide in 1995 at the age of 29, Wilson became an advocate for mental health issues — which included serving as the chair of the Mental Health Commission of Canada for the past four years.

Tributes to Wilson poured in after his death.

Michael Wilson’s dedicated service to Canadians – including his important work as Minister, Ambassador, and passionate advocate for mental health – will leave a lasting impact on our country. We’ve lost a truly great Canadian. My condolences to his family and friends.

This is a sad day. Michael Wilson served Canada with exceptional skill and dedication. From the Cabinet table to serving our country with dignity and wisdom as Ambassador in Washington, Mike embodied the best of public service. Laureen and I extend our heartfelt condolences.

Jill and I are saddened to hear that former Finance Minister and Ambassador Michael Wilson has passed away. We’re thankful for his service to Canadians and his dedication to mental health advocacy. Our prayers are with his family and loved ones this evening.

Toronto Mayor John Tory said he was “one of the most intelligent, decent people” he has ever met.

Michael Wilson was one of the most intelligent, decent people I have ever met, inside or outside of politics and public life. He was a steady, capable MP, Minister and Ambassador and led in historic changes such as Free Trade and the GST which transformed Canada for the good.