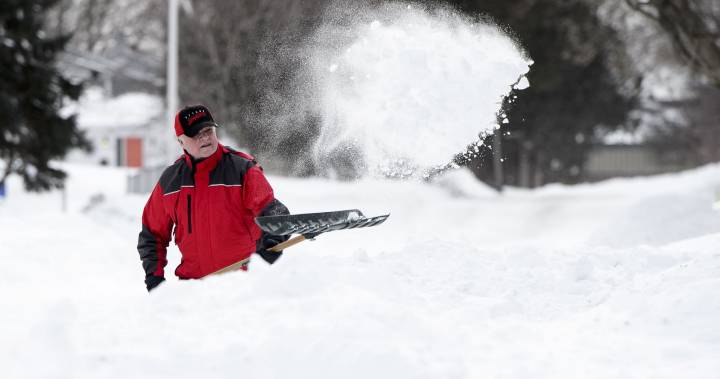 After a windy snowstorm dumped about 20 centimetres of fresh powder on Ottawa overnight Tuesday, Environment Canada has terminated the winter storm warning for the national capital.

But the snow hasn’t let up yet and the national weather agency predicts another five centimetres will fall before tapering off into flurries later Wednesday.

More blowing snow is in Environment Canada’s forecast for the afternoon, with winds gusting up to 60 kilometres per hour.

While the worst now appears to be over, the heavy snowfall still put a halt to many activities across the city Wednesday morning.

The Ottawa International Airport is reporting that a number of flights are delayed or cancelled because of the weather conditions.

On the roads, Ottawa’s public transit provider warned earlier in the morning that road conditions remain poor and told transit riders to expect detours, delays and trip cancellations for both OC Transpo and ParaTranspo rides.

All road users, including our buses, are impacted by severe weather conditions that increase traffic congestion across the city. We thank our customers for their patience and understanding.

All schools in Ottawa are closed for the day.

City council’s regular meeting on Wednesday has been cancelled, as has the budget consultation meeting scheduled for the evening.

All city libraries and recreation facilities are closed in the morning but will reopen and resume regular programming at 12 p.m.

On Tuesday afternoon, the City of Ottawa said the top priority for its road crews during the storm would be to keep the Queensway, Transitway, and other major and arterial roads clear.

Crews will plow residential roads “as soon as possible,” the city said but warned those streets won’t be cleared as quickly as the main roads.

If it’s safe to do so, the city is asking residents to sweep the snow away from fire hydrants connected to their properties.

The City’s 311 service is experiencing high call volumes. Please only call the service if the matter is urgent.

Only call 311 if you have an emergency, the city tweeted early Wednesday morning.

Police urge pedestrians not to walk in the streets and remain on the sidewalks.

Although sidewalks may be full of snow, we advise against walking on the street instead.

This can be very dangerous if a vehicle were to fishtail. #SnowMageddon2019