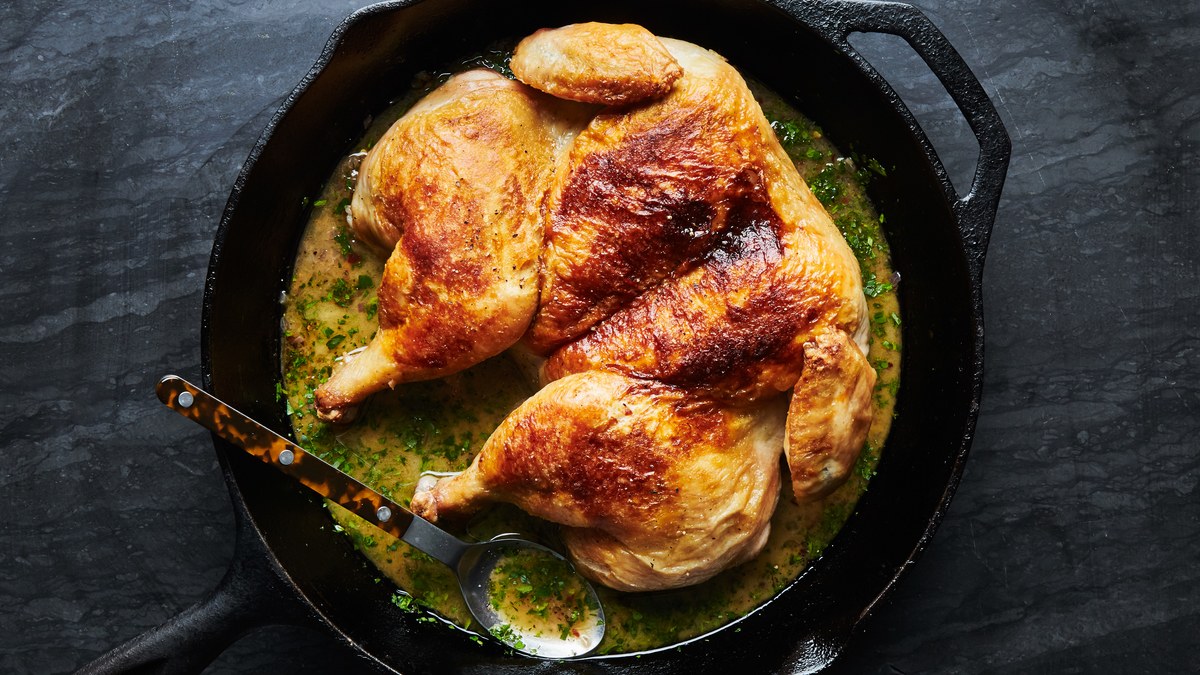 That’s what’s Carla Lalli Music texted me after I made her famous, skillet-roasted spatchcocked chicken, and it completely didn’t turn out how it was supposed to.

Which is to say, crackling crisp skin, with juicy—never dry!—meat, and a pan sauce redolent of salty drippings, white wine, fresh herbs, and butter. All in 30 minutes flat, as Carla frequently advertises, like some late-night infomercial host.

Now, in Carla’s defense, I will admit this: I didn’t exactly follow directions. Nor a recipe. Nor anything other than my not-so-correct instincts.

It was this past Friday night. I went to the butcher after work and asked the guy behind the counter to spatchcock a three-pound bird—that is, remove the backbone, and flatten it like an opened-up history textbook.

Spatchcocking accomplishes two things: A) It allows the skin—all of the skin—to crisp up beautifully when the bird is roasted in a skillet, chicken-under-a-brick style, as the Italians call it. B) Because the chicken lays flat, it cuts the cooking time in half compared to a typically roasted whole chicken.

A win-win all around, right?

Well, except that I should have let the pan heat up far more, so when you lay the bird in, skin-side down, it immediately and aggressively sizzles like some ASMR video.

I set the oven to 400 degrees instead of the prescribed 500. I never reached for a digital thermometer so I would actually know when the chicken was done (160 degrees internal temp is your aim). Failing to do all this meant I had to finish the chicken on the stove top, which worked okay, I guess, but was far from ideal.

I still made a literally finger-licking pan sauce, my wife and I still polished off a bottle of wine, I got the gram (see above!), and Friday night dinner was saved.

But I guess the moral of the story is, do like Carla, not like Rapo. Take 3 minutes and watch this clear-as-day video. Or follow this recipe for a modified chicken under a brick, using boneless (but skin-on) chicken thighs. And impress your husband or wife or dinner guests or whomever. Guaranteed.

Oh, and one more thing—after you remove the screeching-hot skillet from the oven and it’s sitting on your stove top, make sure you keep a dish towel draped on the handle so you don’t unwittingly grab it with your bare hand. Yes, I learned that lesson the hard way, too.