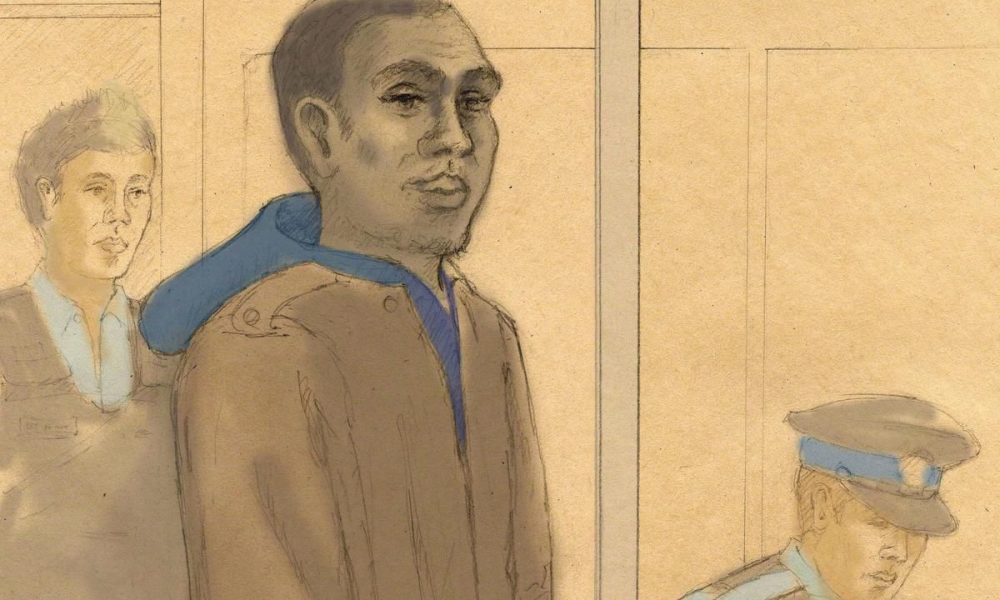 After a second trial almost identical to the first, a jury is once again deliberating whether Christopher Husbands murdered two men and injured several other people when he opened fire in the Eaton Centre food court in 2012, or whether he was in a “dissociative state” while shooting and therefore not criminally responsible for his actions.

Husbands, 29, admitted he was the gunman in the shooting at the landmark downtown Toronto mall at 6:22 p.m on June 2, 2012. Nixon Nirmalendran, 22, and Ahmed Hassan, 24, died from gunshot wounds. Connor Stevenson, 13, who was at the food court with his mother and sister, survived after being shot in the head. The shooting and subsequent chaos, during which a pregnant woman was trampled, was captured on surveillance video from the mall.

The jury at Husbands’ second trial was told he had been tried once before. But it did not know he was initially charged with first-degree murder, that he had been convicted on two counts of second-degree murder by the first jury in 2014 nor that he had been sentenced to life in prison with no chance of parole for 30 years. His jury was also never told it was a judge’s mistake that resulted in the Court of Appeal ordering a new trial.

The mistake — which resulted in a number of appeals — occurred while potential jurors were being questioned about bias. Instead of allowing the defence request to use “rotating triers” — where two different people from the jury pool assess each new juror — the trial judge, Superior Court Justice Eugene Ewaschuk, imposed “static triers,” where the same two people assess all twelve jurors.

Since the Crown did not appeal the first jury’s finding of second-degree murder, Husbands could not be charged with first-degree murder at his second trial. As such, he faced the lesser murder charges in addition to charges of aggravated assault.

The defence of not criminally responsible presented by Husbands was the same as in the previous trial, though this time it was supported with more expert witnesses, including Boston-based psychologist and PTSD expert Dr. Mark Miller.

In his closing address, Husbands’ lawyer Dirk Derstine argued his client is not criminally responsible for the shooting because he was in a dissociative state where his body did things his mind could not control.

Husbands, who testified to having been physically and sexually abused as a child growing up in the Regent Park neighbourhood, was diagnosed with post-traumatic stress disorder after a violent attack in February 2012. He told the jury he was ambushed at an apartment, tied up with duct tape, beaten, pistol-whipped and stabbed two-dozen times by six men. Husbands testified his attackers that night included Nixon and Nisan Nirmalendran — two men who were in the food court on June 2, 2012.

On the day of the shooting, Husbands claimed he was temporarily “holding” a loaded gun for a person known as “Gaza,” who was concerned about being stopped by police in the Entertainment District.

Husbands and his then-girlfriend went to SportChek to buy rollerblades, and then picked up burgers to take away. It was when his girlfriend went to get sushi that Husbands saw the Nirmalendran brothers and three other men.

Seeing them put Husbands, already fearful and paranoid, into a scenario from his worst nightmare, Derstine said. He argued that if Husbands had been after revenge, he knew where to find the brothers.

The Crown disputes how serious Husbands PTSD was at the time of the attack and maintains Husbands faked his dissociative symptoms which fall at the “extreme end” of the scale and would be extremely rare.

The Crown’s expert witness Dr. Peter Collins testified Husbands did not appear to be acting in the disorganized and robotic manner he would expect in a dissociative state — including when he “executed” Nixon Nirmalendran at point-blank range as he lay on the floor.

Instead, the Crown argues Husbands, who was armed with a loaded gun, intended to kill Nixon and Nisan Nirmalendran as revenge or “street justice” for their attack on him.

“This is not a situation where the group approached him and confronted him and he reacted on impulse to a threat,” Cisorio said. “It was Mr. Husbands who was the threat.”